South Africa is, in a wildlife sense, strongly associated with the ‘Big Five’. I always struggle to remember who the ‘Big Five’ are, and with my zoological research mainly focussed on the smaller mammals, I find all the other mammals (and other animals) just as interesting. All species, large and small, make a contribution to the ecology of a habitat. This is a photographic gallery of the unsung heroes of the southern African savannah and scrubland.

The grasslands of Africa are home to a stunning diversity of antelope, from the duiker and steenbok (steenbuck) at the small end up to the giant sable and roan at the large end. In addition to the African antelope, there is the unlikely graceful giraffe, the robust tank-like warthog, the regal zebra, the timid scrub hare, and the cheeky ground squirrel. I also include images of a couple of non-mammals; a tree frog representing the Amphibia, and an armoured ground cricket representing the insects and other invertebrates.
The African savannah ecosystem began to expand approximately 25 million years ago (replacing rainforest as the climate changed). The change in habitat facilitated the evolution of a new group of terrestrial herbivores adapted to the bulk of course vegetation available. Ruminants are so called because of the fore-stomach (rumen) that enables them to ferment grass. They double-digest their food by regurgitating to re-chew grass, chew the cud, after the first phase of micro-organism (bacteria and protist) aided digestion in the rumen. The food is then passed through the remainder of the four stomach compartments to complete digestion. Ruminants can therefore process more fibrous plant material than non-ruminants (e.g. elephant, rhino, zebra). However, the digestive process is slow, and their intake needs a minimum 6% protein to sustain body condition. The biodiversity of ruminant species (also known as even-toed ungulates (Artiodactyla)) is testament to the success of this digestive strategy in the savannah ecosystem.

The grazing herbivores are giving as well as taking from their environment. The urine and faecal waste produced by grazers fertilises the soil which promotes grass growth which feeds the herbivores... Alongside fertilising, the herbivores, by cropping the grass, also stimulate fresh growth. Fire, both natural, and managed, similarly promotes grass re-growth. Add in rain, and savannah habitat has the capacity to produce between five and thirty five tonnes per hectare. Which in turn supports massive herds and biomass of herbivores...

This gallery, and the photographs within, present a small window into the animal biodiversity of the South African savannah. 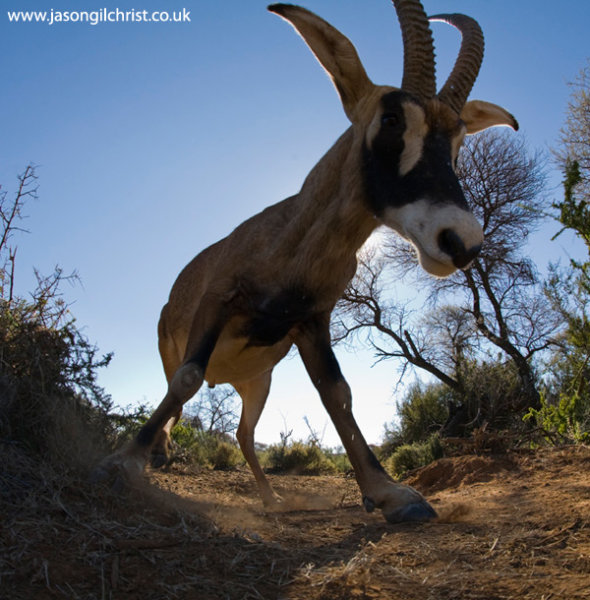