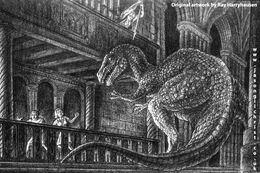 The world recently experienced the much-anticipated launch of the Jurassic World Dominion trailer. The movie, the closing ‘episode’ of the Jurassic era (Jurassic Park/Jurassic World) franchise has garnered much interest and praise for its dinosaurs and interplay with human characters. But Jurassic Park was not the first cinematic experience to pitch realistic dinosaurs (and other extinct giant reptiles), or indeed other fantastic creatures… alongside, and at times against, humans…

There have been many dinosaur themed movies over the years. Willis O’Brien’s The Lost World (1925) and King Kong (1933) stand out as the first cinema films to feature realistic dinosaurs, and humans in the same timeline. And it was the King Kong movie, and its portrayal of the giant gorilla and other creatures, that inspired one of the most revered animators in cinema history to take-up a career in stop-motion special effects…. 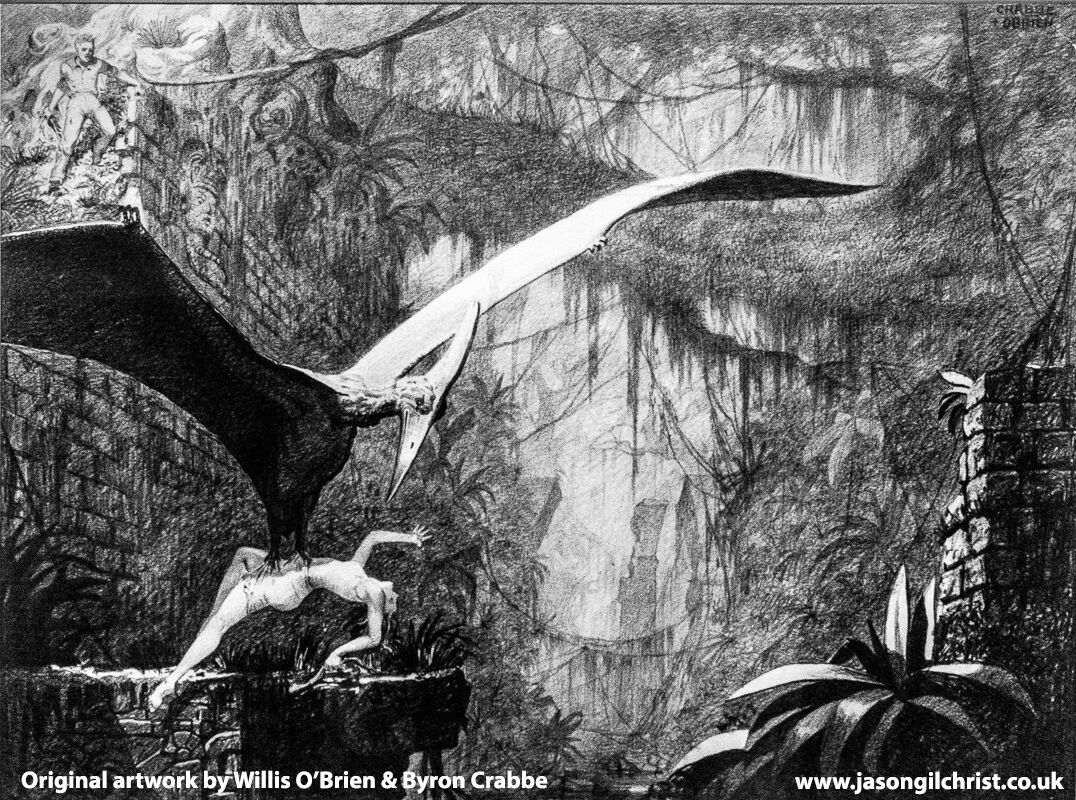 Pteranodon drawing for Creation, by Willis O'Brien and Byron Crabbe (~1931). Creation was an unrealised Willis O'Brien movie project. It was the art, and process of mentor Willis O'Brien, as well as his movies, that inspired Ray Harryhausen. Ray brought pteranodon pterosaurs to the big screen in One Million Years B.C. and The Valley of Gwangi. At the Ray Harryhausen: Titan of Cinema exhibition, Scottish National Gallery of Modern Art, Edinburgh, Scotland.


Ray Harryhausen, movie special effects pioneer and genius. Ray Harryhausen's art was recently brought back to life at the largest exhibition of Harryhausen artefacts ever on display, Titan of Cinema, at the Scottish National Gallery of Modern Art, Edinburgh. The physical exhibition was complemented by the first ever online Ray Harryhausen Exhibition.

In 1938, aged just 18 years old, Ray began planning an ambitious feature-length project, The Evolution of the World, which featured dinosaur action sequences. Ray would return to dinosaurs for the big screen with One Million Years B.C. and The Valley of Gwangi. These dinosaur films certainly caught the attention of a budding young biologist (me). But the canon of Harryhausen creatures across the years and movies also included a plethora of aliens, mythical monsters, and fantastical beings, alongside some notable stop-motion reconstructions of familiar living species. 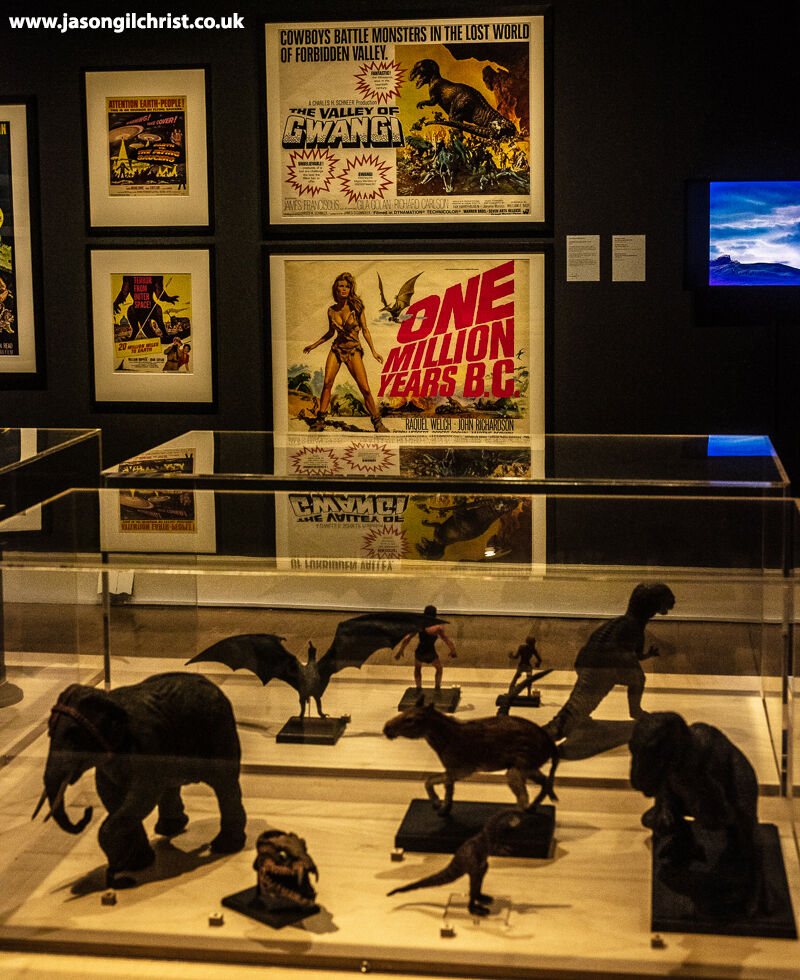 Ray would have appreciated this. He himself studied art and anatomy, at the recommendation of stop-motion pioneer Willis O’Brien, whose magnum opus, King Kong, Ray watched at his local cinema many many many times...

Ray also wanted his work to have an educational value, beyond their original showing. And that was a major motivation behind his creation of the Ray and Diana Harryhausen Foundation in 1986. 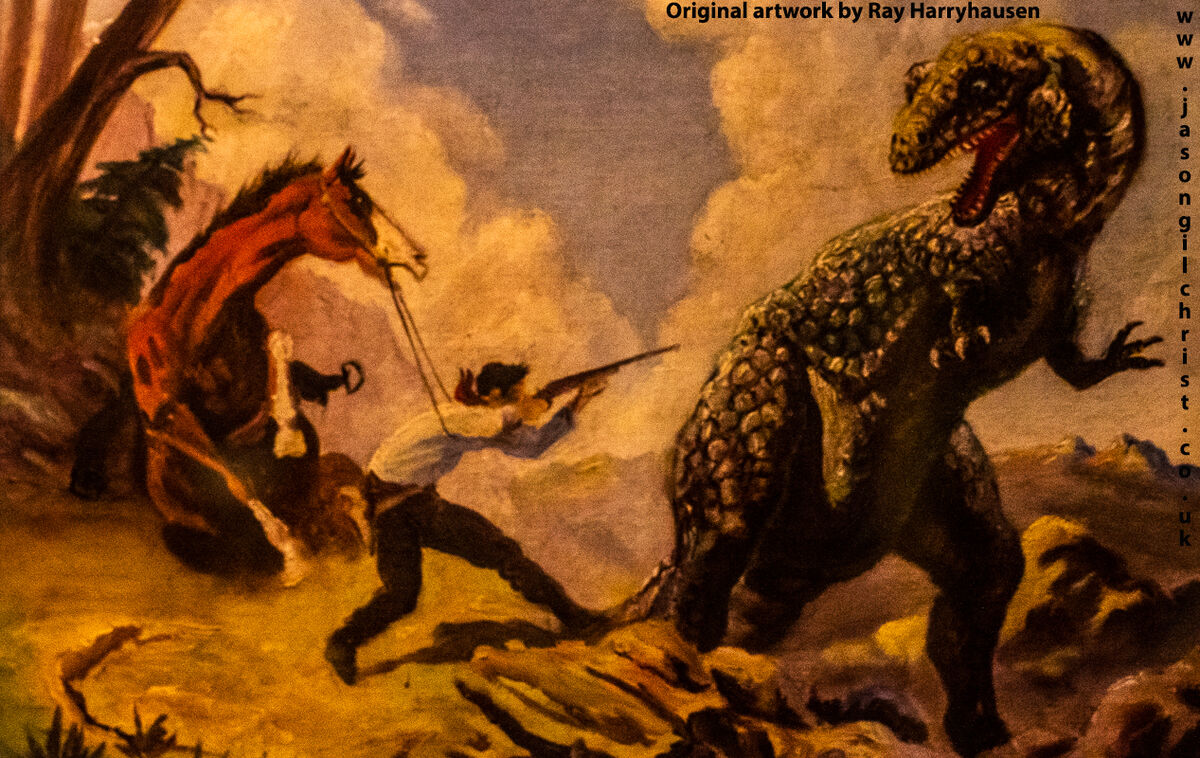 Cowboy v's dinosaur. Painting by Ray Harryhausen. Pre-visualisation of Gwangi many years before The Valley of Gwangi. At the Ray Harryhausen: Titan Of Cinema exhibition, Scottish National Gallery of Modern Art, Edinburgh, Scotland.


I for one was struck, not only by the remarkable detail of the 3D hand-made models themselves, but also by how accomplished Ray Harryhausen was in 2D artwork. Ray’s sketches and key artwork were a method of instantly communicating to producers what he envisaged in his mind and ultimately would realise on-screen, via stop-motion. Ray was drawn to visual art as an outlet to share what was in his imagination with others.

I asked Ray’s daughter, Vanessa, for her memories of where Ray got the knowledge to depict his creatures. “He went to the Natural History Museum (London) regularly and had a large personal library.” Ray regularly took Vanessa to the La Brea Tar Pits when they visited the USA, and once took part in a dinosaur dig. “That was one of his happiest moments - he had such a huge smile on his face whilst helping to excavate a dinosaur!”

Whilst Ray took some artistic licence with some of his real-animal reconstructions, his models and their animation were way ahead of their time, and it is clear that Ray knew his biomechanics. For the famous skeleton fight sequence in Jason and The Argonauts, Ray enrolled on a sword-fencing course for 6-months so as to understand and more effectively animate the movement of the skeletons. For the baboon and tiger sequences in Sinbad and the Eye of the Tiger, Ray spent many hours watching, sketching and filming said animals at London Zoo.

Nevertheless, he was not a stickler for scientific accuracy, and according to Mark Witton, Harryhausen was not meticulously reconstructing fossil animals… he was looking at other artist’s work. Indeed, Vanessa Harryhausen acknowledges Ray’s initial inspiration as the art of Charles Knight, with Ray himself stating that he based his drawing style on Gustave Dore, appreciating his imagination: “He was really the original art director”. 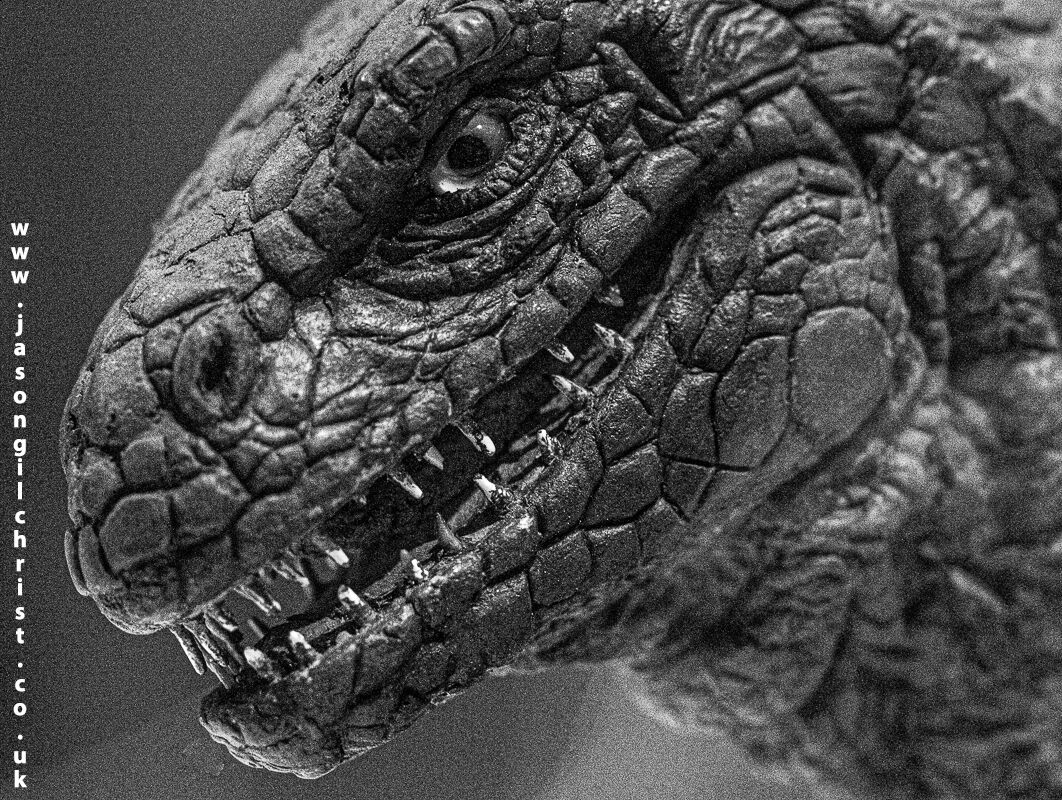 
Storylines, as well as anatomical accuracy were oft-compromised or sacrificed for elements of the fantastical (and practical). As an ecologist, with my feet firmly planted in the scientific realm, I can forgive Harryhausen his flights of fancy. He had an appreciation of anatomy, biomechanics and behaviour, he studied hard, and liked dinosaurs.

I can relate to all of those qualities. And, in much the same way, as Jurassic Park inspired a following generation, Ray Harryhausen inspired generations of zoologists and palaeontologists, like myself, touched by the magic of one or more of his movies, and the life that they brought to extinct, extant and imagined creatures.

A key aim of modern palaeoecology is re-imagining past worlds. Harryhausen was a master of imagination and visualisation, via his art and storytelling, and in the same way that we picture lost ecosystems via palaeontology, and contemporary ecosystems via observation and film, so Harryhausen blended approaches, studied and experimented, to reach his goals.

Steven Spielberg, the director of the original Jurassic Park movie, paid tribute to Ray Harryhausen on his passing in 2013, “the artist magician who breathed life into clay figures and wire armatures and made us, as kids, happily fear for our lives, [he] was the dean of special effects“. Spielberg continues his involvement with the Jurassic World Dominion movie in the role of Executive Producer, alongside director Colin Trevorrow, who also looks to Ray Harryhausen’s art, including Harryhausen’s dinosaurs v cowboy’s movie, The Valley of Gwangi, for inspiration

Paleontology Advisor on Jurassic World Dominion, Professor Steve Brusatte, shared his thoughts with me: “Ray Harryhausen is a giant. So much of what we see on the big screen today, when it comes to movie monsters, can be traced to him. Harryhausen’s style, craftwork, and imagination permeate films like the Jurassic and Star Wars franchises, and all of the superhero movies that have taken Hollywood by storm. All monster and character flicks lead to Harryhausen.”

Special effects in modern movies owe a huge debt, through the influence of his art, storytelling and movies, to the genius that continues to fire imaginations. That is the legacy of Ray Harryhausen: Titan Of Cinema. 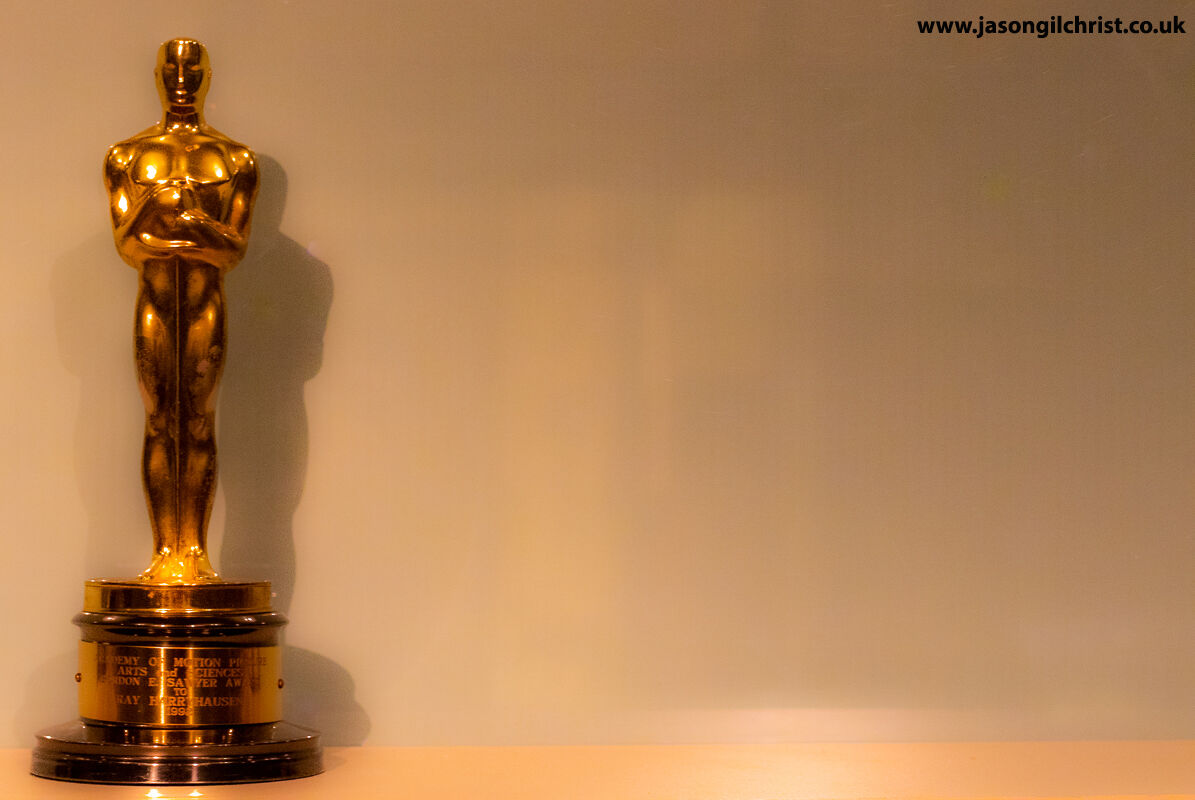 Ray Harryhausen 'lifetime achievement' OSCAR (Academy Award) for "technological contributions [which] have brought credit to the industry", presented by longtime friend Ray Bradbury, with Tom Hanks as Master of Ceremonies, 1992.

I would like to thank the Ray and Diana Harryhausen Foundation, and National Galleries Scotland, for making the Ray Harryhausen: Titan of Cinema exhibition happen. And for putting on the Virtual Exhibition Experience to enable those who could not attend the exhibition physically to get more than a flavour of it's magic (and more). A talented and dedicated team lie behind the exhibition, physical and virtual, making for an unforgettable experience and memory that stands proud as a window into the life and work of Ray Harryhausen. I would also like to thank Professor Steve Brusatte, in his role as Paleontology Advisor for JURASSIC WORLD DOMINION for taking the time to share his thoughts on Ray Harryhausen with me. And Mark Witton, for guest starring in my one and only podcast, in tribute to Ray Harryhausen in the centenary of his birth. 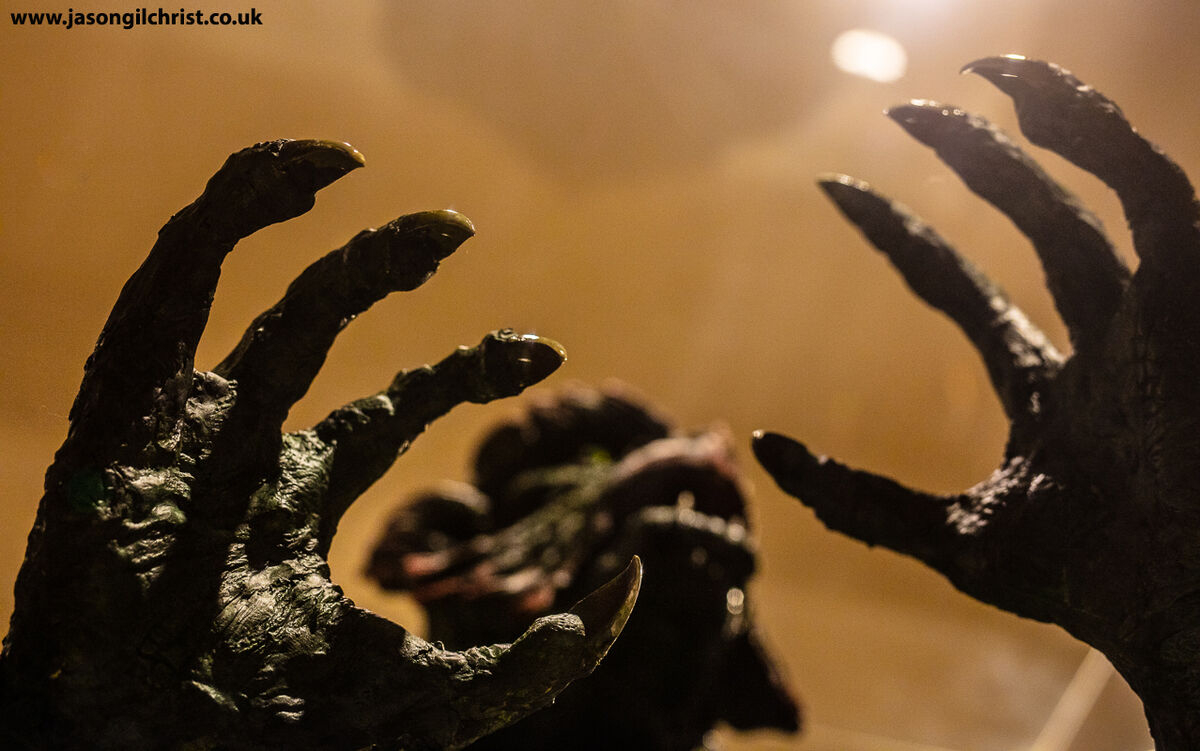 The Kraken, from Clash Of The Titans. Not a dinosaur, or other prehistoric creature but a creature of myth and legend. And one of the largest models at the Ray Harryhausen: Titan of Cinema exhibition, Scottish National Gallery of Modern Art, Edinburgh, Scotland. 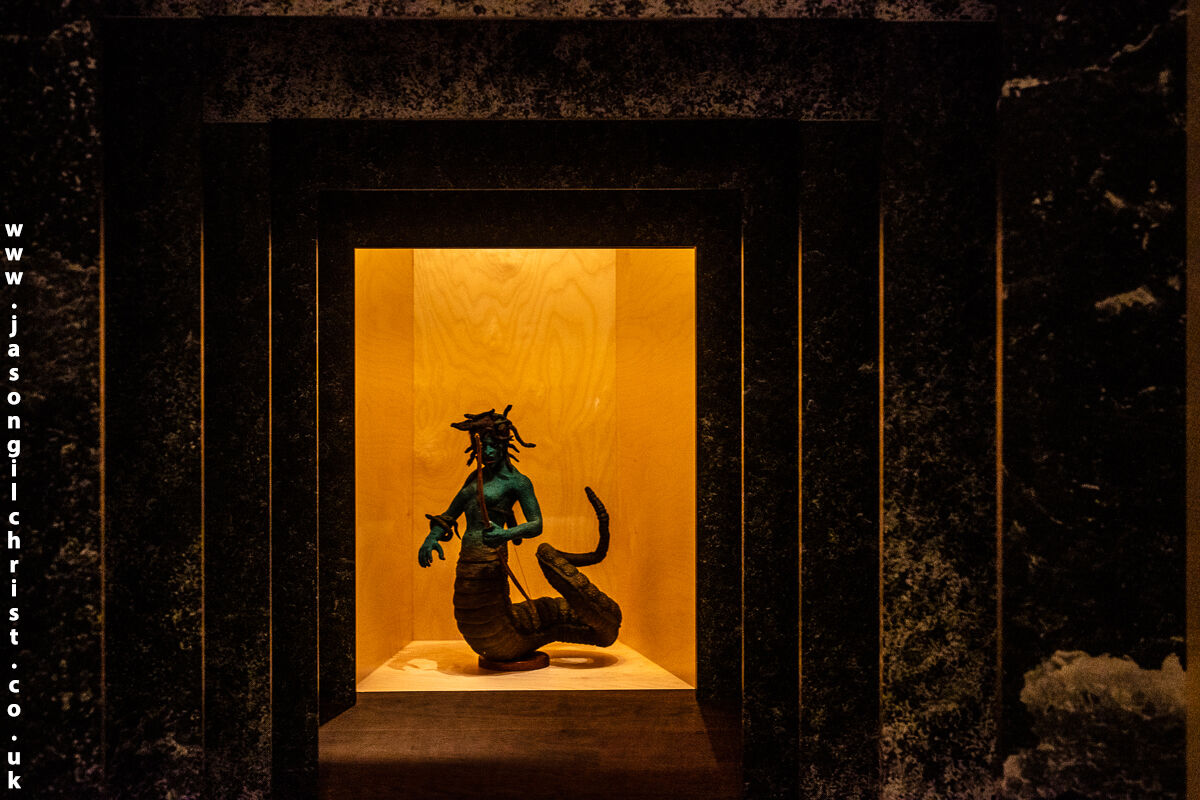 Medusa, from Clash Of The Titans. Not a dinosaur, or other prehistoric creature but a creature of myth and legend. But one of the models that provided a window into the imaginative worlds of Ray Harryhausen at the Ray Harryhausen: Titan of Cinema exhibition, Scottish National Gallery of Modern Art, Edinburgh, Scotland. 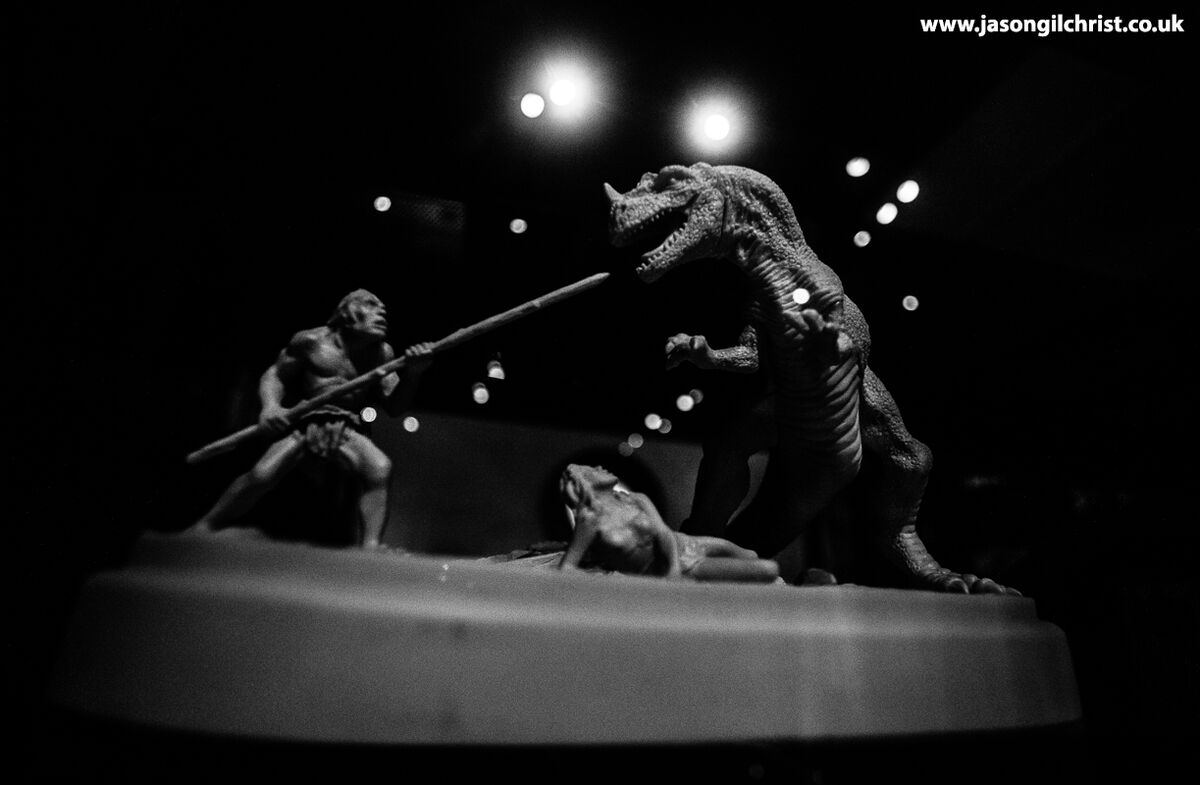 Sculpture based on One Million Years BC. By Ray Harryhausen. Tyrannosaurus rex/Allosaurus, with cavewoman (Lolana, played by Raquel Welch in the movie) and caveman (Tumak, played by John Richardson in the movie). At the Ray Harryhausen: Titan Of Cinema exhibition, Scottish National Gallery of Modern Art, Edinburgh, Scotland. 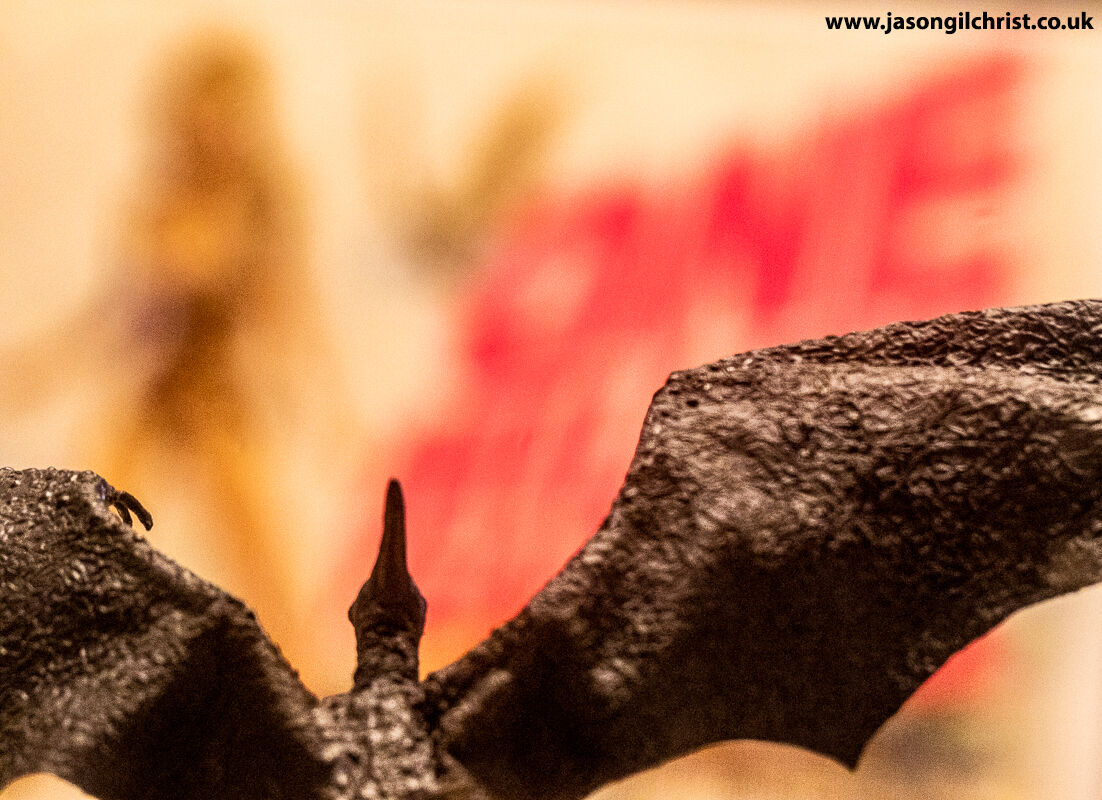 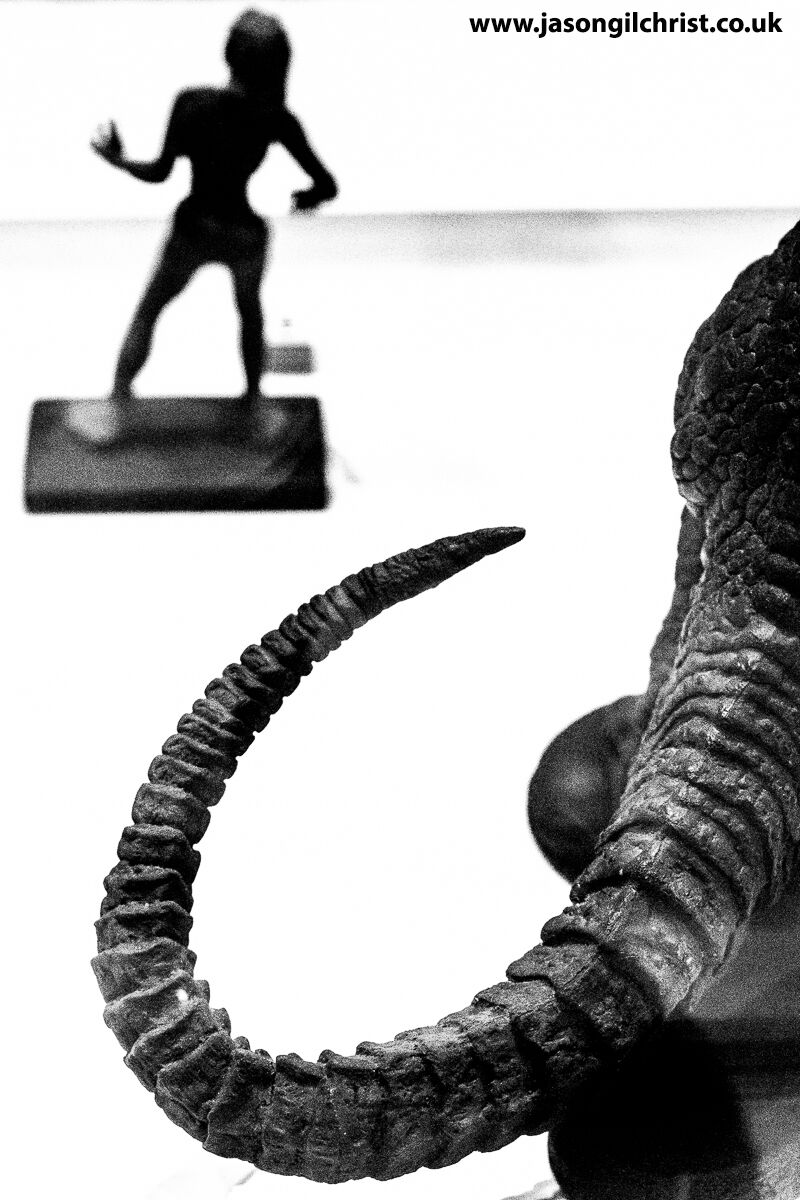 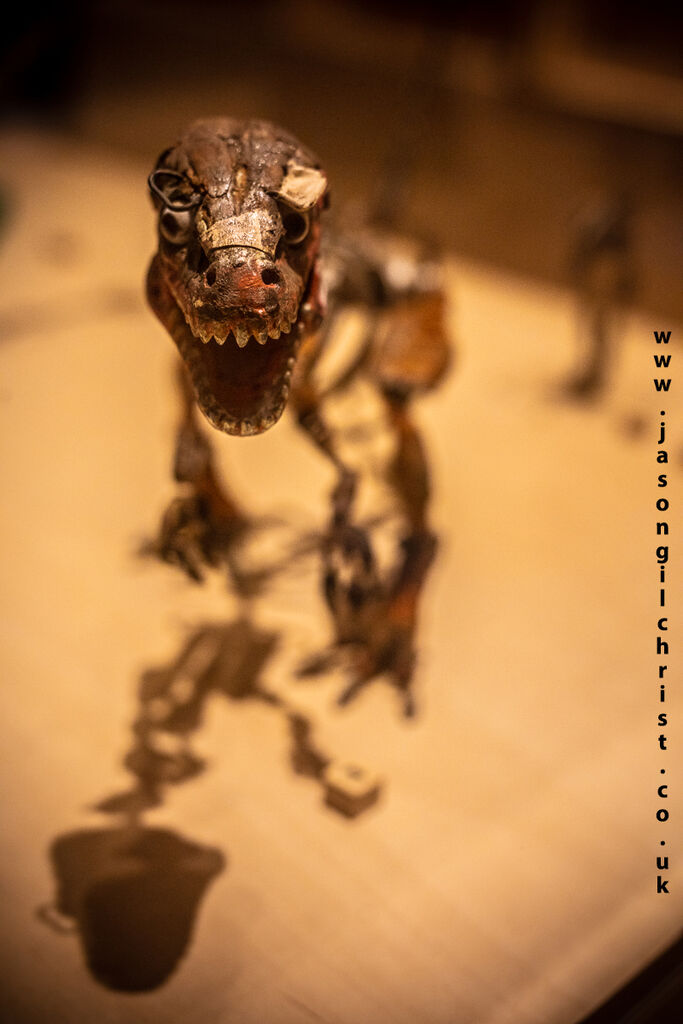 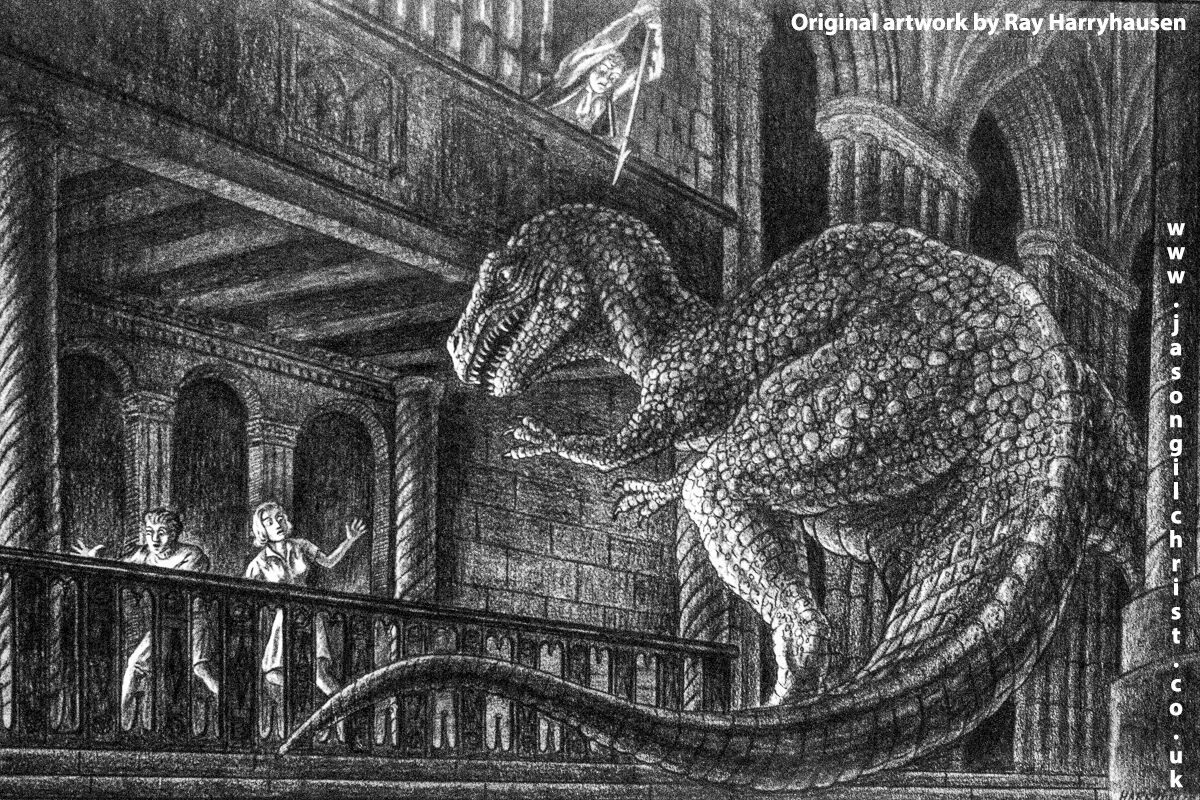