Tyrannosaurs: from T. rex to Nanotyrannus, all features great and small

What is the greatest fight you can imagine in the world of dinosaurs? A pair of Tyrannosaurus rex having a go at each other (more of that later)? Perhaps not. It may instead be the controversy and debate raging between palaeontologists on whether there was a dwarf species of Tyrannosaur in the same place at the same time as T. rex.

As an ecologist my expertise lies in studying the ecology of living species – and my interest in dinosaurs and other extinct animals is the integration of understanding that comes from cross-over between the past (palaeo) and present. Evolution plays a key role in interpreting contemporary ecology, past ecology and the route between the two. In this article, I highlight that the structuring of the ecosystem in the Cretaceous re. large carnivores may have been fundamentally different from contemporary ecosystems, and the explanation as to why relates to care of young.

Nanotyrannus – to be or not to be?

In a recent scientific paper by Dr. Holly Woodward of Oklahoma State University and team, the osteohistology (bone microstructure) of a particularly divisive tyrannosauroid specimen is examined. Previously, some palaeontologists have posited BMRP 2002.4.1 (a tyrannosaur sympatric in time and space with T. rex, but at only ~ half the body size of an adult T. rex) and similarly sized specimens from the Hell Creek Formation (USA) to be adults of a pygmy genus of tyrannosaurid, Nanotyrannus (via similarities with the putative Nanotyrannus type-specimen CMNH 7541).

Reading the structure of these fossil dinosaur bones indicates that the specimens experienced a seasonal growth pattern, with growth rings, similar to those found in tree trunks. Variation in the thickness of rings likely reflect annual differences in growth associated with food intake (and therefore availability).

These growth rings tell us that BMRP 2002.4.1 was at least 13 years of age at its death. For the related specimen BMRP 2006.4.4, the team can even tell that it died soon after growth resumed following the annual hiatus at ~ 15 years of age.

Both dinosaurs met their death prior to experiencing an exponential growth spurt noted in older Tyrannosaur specimens. There is also evidence in the bones that tyrannosaurs may have prolonged the juvenile stage during periods of limited food availability. Trix, the oldest known T. rex specimen was aged in her 30’s at death.

Osteohistology (bone structure) as viewed under microscope. An external fundamental system (EFS) is the only way to conclusively confirm attainment of asymptotic adult body length from the long bones of reptile taxa. In both BMRP 2002.4.1 and BMRP 2006.4.4, rather than exhibiting an EFS, a woven-parallel complex extends to the periosteal surface. Histology therefore supports morphological observations that these tyrannosauroid specimens were skeletally immature individuals at death. (A) An EFS composed of tightly stacked birefringent LAGs (Lines or Arrested Growth) between blue arrowheads) at the periosteal surface of an Alligator mississippiensis. (B) The EFS (between blue arrowheads) in an ostrich (Struthio camelus) is made of nearly avascular, birefringent parallel-fibered to lamellar primary tissue. (C) No EFS is present at the periosteal surface of the femur of BMRP 2002.4.1, (D) the tibia of BMRP 2002.4.1, (E) the femur of BMRP 2006.4.4, or (F) the tibia of BMRP 2006.4.4. All panels are shown in transverse thin section, with CPL (cross-polarised light). From: Woodward, HN, Tremaine, K, Williams, SA, Zanno, LE, Horner, JR, Myhrvold, N (2020) Growing up Tyrannosaurus rex: Osteohistology refutes the pygmy “Nanotyrannus” and supports ontogenetic niche partitioning in juvenile Tyrannosaurus. Science Advances 6: eaax6250.

Nanotyrannus – a case of mistaken identity 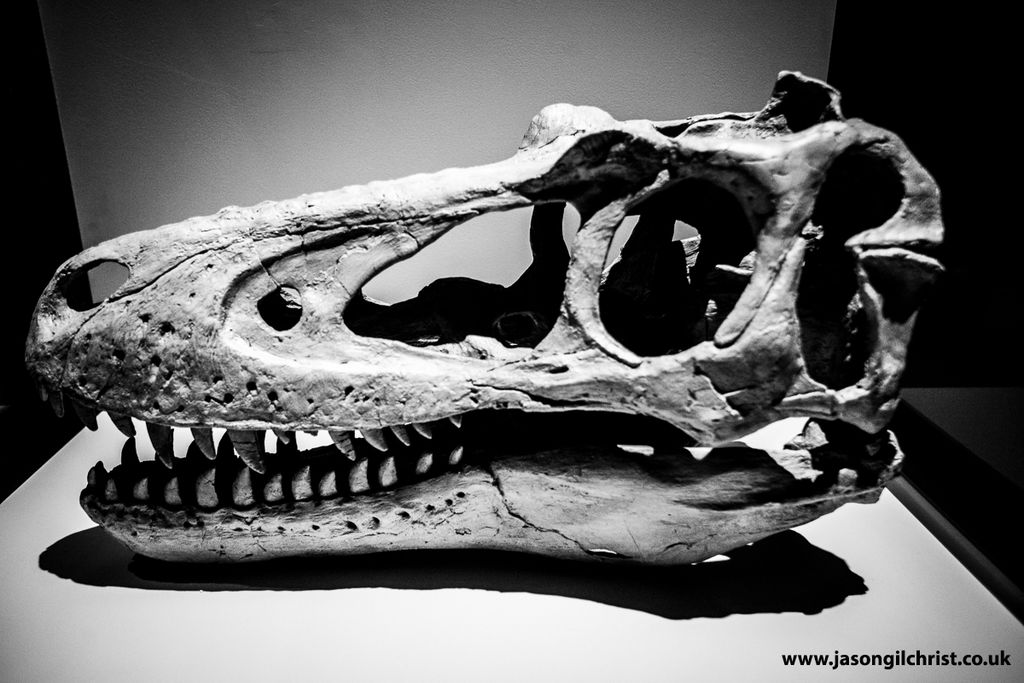 Nanotyrannus lancensis skull (or is it... a subadult T. rex?). Cast, from Tyrannosaurs exhibition, National Museum of Scotland, Edinburgh, Scotland.


Crucially, Woodward et al’s study informs the debate regarding the specimens’ status as immature T. rex or an adult member of a ‘new’ genus (Nanotyrannus), “histology supports morphological observations that [the specimens] were skeletally immature individuals [of T. rex] at death”.

What are the implications of this for our understanding of community ecology of the Hell Creek Formation ecosystem in the Cretaceous (75 mya)? The science indicates that T. rex was the only major predator present. Its’ late attainment of massive (over 9000kg, Scotty the largest T. rex skeleton ever discovered was unearthed in Canada in 1991) adult body size means that there was plenty of time and space for juvenile T. rex to occupy different niche space. This is called ‘ontogenetic niche partitioning’.

Immature T. rex, being substantially smaller, and with a morphologically disparate skull, were likely to be predating upon smaller prey than adults, and also were unlikely to be able to crush or eat bone, as they would go on to do in adulthood (had they survived). It is also possible that with the size disparity between adult and juvenile that cannibalism took place with the larger adults on occasion preying upon smaller youngsters of their own species, as well as subadult T. rex scavenging on adult T. rex.

Dr. Steve Brusatte, in his book, The Rise and Fall of the Dinosaurs, paints a word-picture of the metamorphosis of Tyrannosaurus rex, “the skeleton of T. rex changed dramatically as it matured. As youngsters, they were sleek cheetahs, as teenagers gangly looking sprinters, and as adults pure-blooded terrors longer and heavier than a bus.” 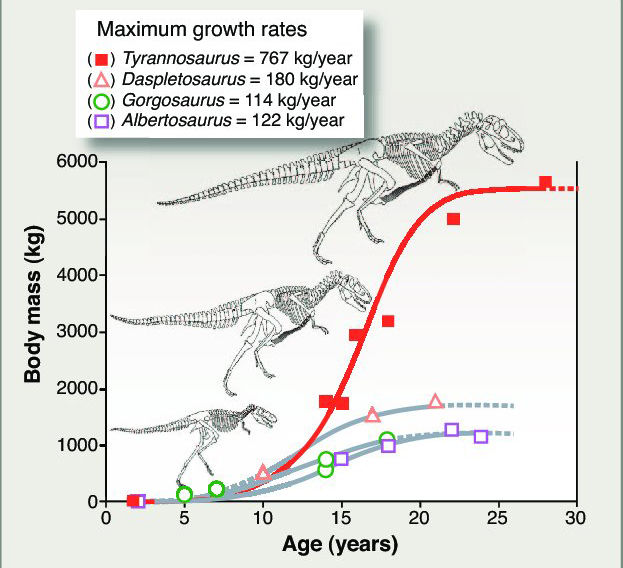 
To me, as an ecologist, niche partitioning within a species, is an interesting phenomenon. Almost all records of ontogenetic niche partitioning in living species are in invertebrates, fish, amphibians and reptiles. Today, the majority of our larger terrestrial carnivores are mammals and birds, e.g. lions, tigers, wolves and eagles. In all these species, there is parental care – where young are raised to adult size on prey captured by parents. 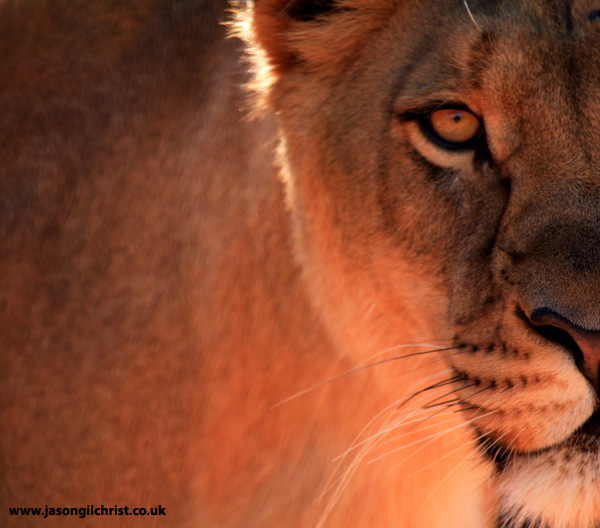 In contrast, whilst it is likely that, as for other dinosaurs, T. rex engaged in parental care, according to Dr. David Hone (in his book, The Tyrannosaur Chronicles) it is unlikely that they provided extended care for their offspring.

So, whilst Woodward et al’s study strengthens the case for ontogenetic niche partitioning (ONP) in T. rex, ONP is minimal at best in today’s terrestrial vertebrate communities. Care of young therefore has effects beyond the species, and up to the ecosystem level. Rather than having a diversity of predatory species filling different niche space, T. rex appears to have truly monopolised the carnivore guild space of the Cretaceous.

If we go further in our re-imagining of the ecology of Tyrannosaurus rex in the Cretaceous ecosystem, we can envisage a lot of T. rex. If dinosaurs were ectothermic, there would be a far greater biomass of dinosaur, herbivore and carnivore, than we see in even the most productive of contemporary ecosystems (e.g. the Serengeti of Tanzania, full of wildebeest, zebra and lion today). It is also thought that T. rex may well have hunted in packs...

Tyrannosaurs – a dynasty of great and small

The Nanotyrannus controversy is unlikely to go away, but whether or not a dwarf Tyrannosaur co-existed with T. rex, the latter was sadly both the pinnacle and endpoint of an evolutionary line of theropod (predatory) dinosaurs, the Tyrannosaurs, that was lost in the spectacular end of Cretaceous mass extinction event ~ 66 million years ago. This brought to an end a history that spanned over 100 million years. The phylogenetic relationships of Tyrannosauroidea, based on Bayesian analysis. From: Brusatte, SL & Carr, TD (2016) The phylogeny and evolutionary history of tyrannosauroid dinosaurs. Scientific Reports 6: 20252.


There are at least 25 known species of tyrannosaur. They lived in a variety of habitats and they evolved to get progressively larger throughout their timeline. From human-sized specimens to the mega-carnivore that was T. rex. Continental drift, climate change and natural selection all played a role in shaping the Tyrannosaurs and the story that they tell us as we look back on the fruits of the labours of generations of palaeontologists.

Tyrannosaurs were not restricted to Asia and America, and there were 3 species living in the UK according to Dr. Dean Lomax – including Eotyrannus, a 4-metre long Tyrannosaur excavated on the Isle of Wight. 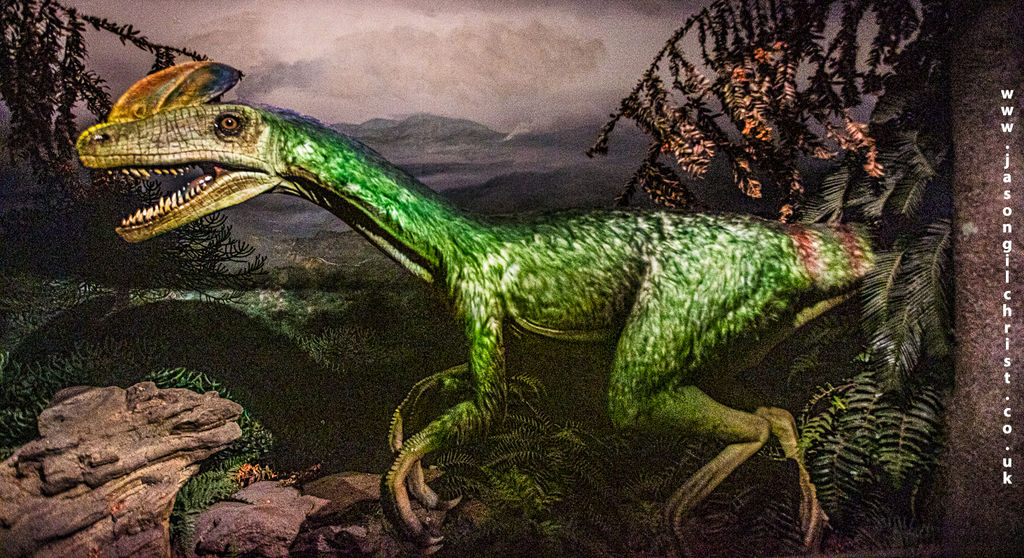 Guanlong, the earliest-known member of the Tyrannosauroidae, and feathered. Model, from Tyrannosaurs exhibition, National Museum of Scotland, Edinburgh, Scotland


Tyrannosaurs may have been extinct for a long time, but the science informing our understanding of them and the world that they lived remains vibrant. New species of tyrannosaur continue to be unearthed. The recently discovered Guanlong, an early feathered tyrannosauroid species from China, was about 1/100th the size of T. rex, and pre-dated the big yin by 100 million years.

We are getting an increasing insight into the behavioural ecology in life of Tyrannosaurs, e.g. the pathologies (injuries and disease) of Trix, tell tales of a life of struggle. Recent research suggests an elaborate brain-cooling mechanism that may have supported extravagant head ornamentation in tyrannosaurs. 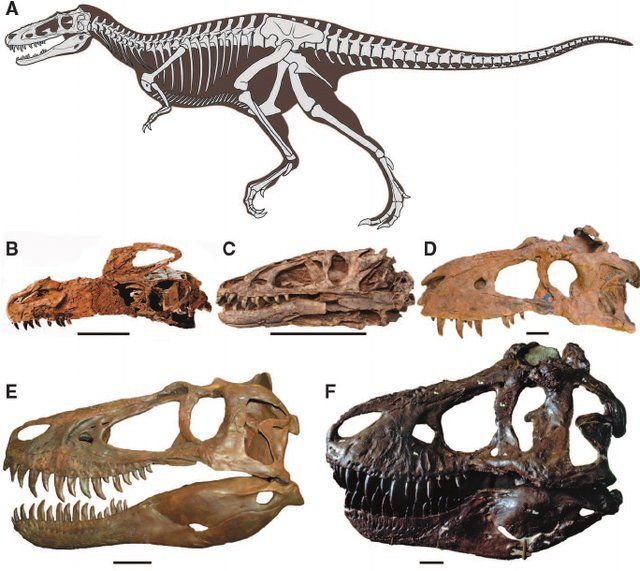 The anatomy of tyrannosaurs, showing the variety of skeletal and cranial morphology in the group. (A) A skeletal reconstruction of Alioramus, a gracile and long-snouted tyrannosaurid, which exhibits many features of the generalized tyrannosaurid body plan (large skull, small arms, long hindlimbs, long tail). (B to D) Skulls of the basal tyrannosauroids Guanlong (B), Dilong (C), and Bistahieversor (D). (E and F) Skulls of juvenile (E) and adult (F) Tyrannosaurus scaled to the same length, illustrating the transition from a longer to a deeper skull during ontogeny. All scale bars equal 10 cm. From: Brusatte, SL, Norell, MA, Carr, TD, Erickson, GM, Hutchison, JR, Balanoff, AM, Bever, GS, Choiniere, JN, Makovicky, PJ, Xu, X (2010) Tyrannosaur Paleobiology: New Research on Ancient Exemplar Organisms. Science 329, 1481 1485.


Our understanding of the sensory capabilities of T. rex and fellow tyrannosaurs, has also come on big time. So, scientists are building an understanding, not only of how tyrannosaurs were built, or even how they behaved, but also of how they sensed the world around them.

Tyrannosaurs may have been extinct for 66 million years, but they are back, albeit not as lively as they once were, but as close as we can get, in an exhibition making its European debut at the National Museum of Scotland. The exhibition features a life-size cast of Scotty, life model of Guanlong, and real tyrannosaur fossils (from the Carnegie Museum of Natural History, USA) – some of the earliest to be discovered. Even Nanotyrannus makes an appearance… 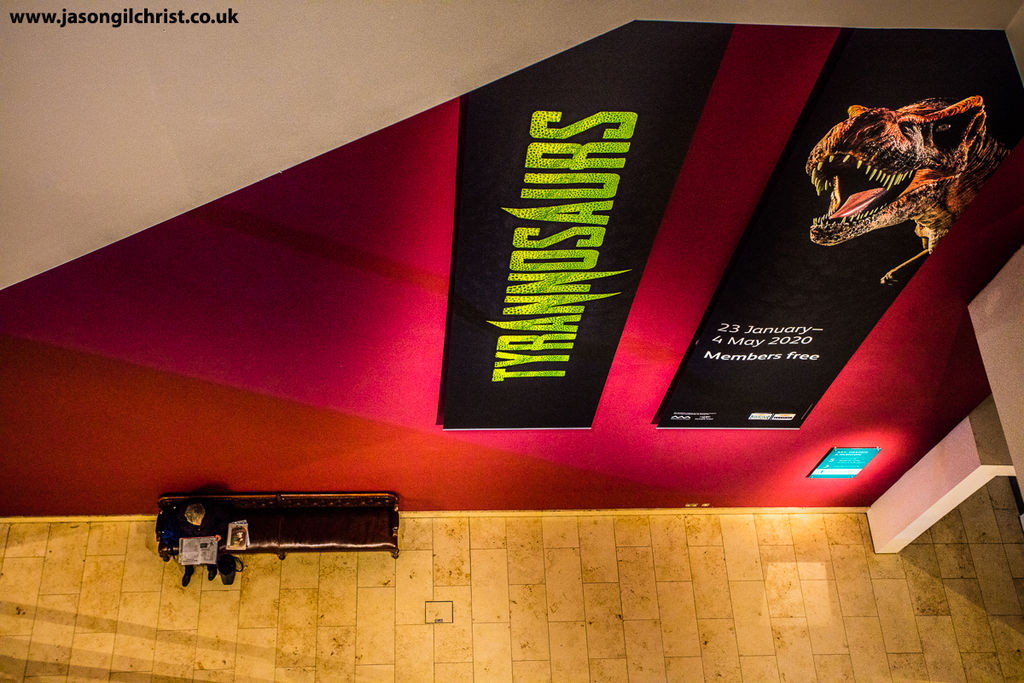 Waiting for the Tyrannosaurs. Exhibition at the National Museum of Scotland, Edinburgh, Scotland.

TYRANNOSAURS, the exhibition, is resident at the National Museum of Scotland, Edinburgh, Scotland, from 23rd January to 4th May 2020.

Check out my Tyrannosaurs: teaser photo gallery with photos relating to the exhibition.

Photos from the Tyrannosaurs exhibition will post to my Tyrannosaurs: The Exhibition photo gallery over the coming days. 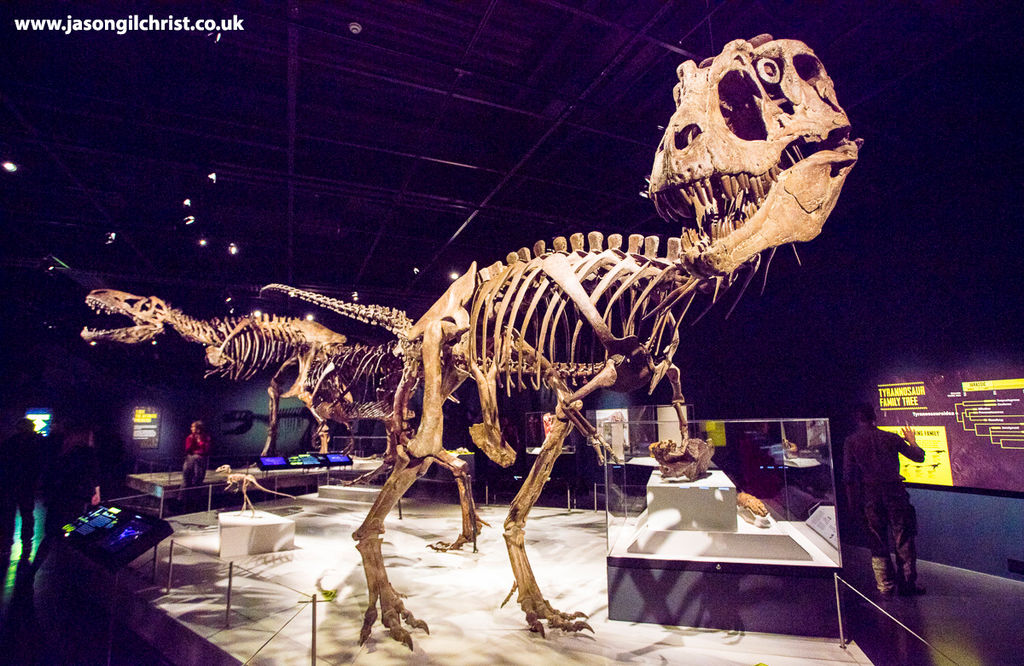 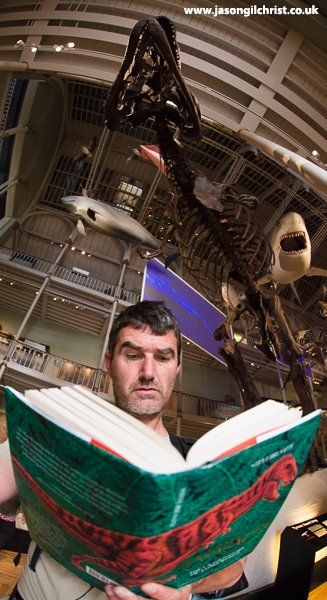 Selfie under Tyrannosaurs rex, reading Steve Brusatte's The Rise and Fall of the Dinosaurs, National Museum of Scotland, Edinburgh, Scotland.

Brusatte, S (2018) The Rise and Fall of the Dinosaurs. Pan Macmillan.

Gilchrist, JS (2019) Tyrannosaurus rex and the Dinosaur teeth of Skye: Windows into the lives of dead dinos. Palaeocast.

Jaggard, V (2019) Why did the dinosaurs go extinct? National Geographic.

Saul, H (2014) Jurassic Britain was a 'dinosaur paradise' with over 100 different species roaming the UK. The Independent.