Amorphophallus konjac. I had not even heard of it. But as a disciple of its larger related species, Amorphophallus titanum (giant corpse flower, nicknamed Titan arum), when I heard that it was flowering at the Royal Botanic Garden Edinburgh (RBGE), I had to go along to see it. And ideally smell it.

On previous visits to Edinburgh’s Amorphophallus titanum (New Reekie) I had not been lucky enough to smell the pungent aroma associated with flowering of these so called ‘stink flowers’ or ‘corpse flowers’. The unpleasant stench of Amorphophallus titanum in flower sadly only lasts for approximately the first 24 hours. Indeed, the towering flowering phallus, after which the genus is named, begins to droop and die within a couple of days of appearance.

I was therefore pleasantly surprised to find Amorphophallus konjac (Wee Reekie) stinking away in the montane tropical glasshouse at RBGE upon my arrival. The scent was not detectable except at close range, but when standing just a few metres from the vibrant protuberance, the unpleasant stench of something that has been dead for a while was unmistakeable.

Under normal circumstances, with stomach retching, one would breath less, shallow and slow, to minimise the inhalation of the sickening rancid odour. However, with the knowledge that this was one unusual plant, and that the stink was likely to be available for a limited time only, I inhaled deeply, sucking air up my nostrils, savouring the unsavoury aroma.

In size, Amorphophallus konjac is not as spectacular (large) as Amorphophallus titanum but it is no less pretty. Whilst smaller than Titan arum, total height can reach over 1 metre. The flowers are produced on a projecting dark purple spadix that can be up to 55 centimetres tall that is itself enclosed by a dark purple spathe (a large bract which is a specialised leaf). It is not small. It is a dark gothic purple colour, with a veined and ribbed silky-textured flesh.

Why the foul smell? The fetid aroma is a ploy to dupe hapless insects that are attracted to carrion (dead animals) to eat or lay their eggs. In nature flies and beetles will visit Amorphophallus konjac expecting (thanks to the stench) to find rotting meat – and will wander around trying to find their reward and in doing so, pick up pollen that they will then transfer to another A. konjac plant in flower. The deep purple colouration is also proposed to be an evolved visual mimicry of dead flesh. This form of parasitic symbiosis (the plant gains a benefit – a postal delivery service for its pollen, facilitating its reproduction, whilst the insect wastes its time…) is an elegant insight into the product of coevolution. The insects have essentially been coerced. Outwitted by a plant.

The plant is also reputed to produce heat as the pollen ripens, intensifying the odour, and potentially increasing the activity (wanderings) of the frustrated (ectothermic) insects that visit, that will therefore inadvertently collect and deliver more pollen.

Also known colloquially as devil’s tongue, konjaku, konnyaku potato, voodoo lily, snake palm, and elephant yam (although unrelated to the yam family, Dioscoreaceae). Amorphophallus konjac is a perennial plant native to the Yunnan Province, southwest China, where it lives in montane forest habitats (830-1200m elevation). The corm and root (tuber) is edible, but only after cooking or drying to break down the otherwise toxic calcium oxalate. The plant is cultivated as a foodplant in tropical and subtropical east Asia outwith its native range. Amorphophallus konjac is a member of the same family (Araceae) as its larger relative, Amorphophallus titanum, that can be viewed alongside it at the Royal Botanic Garden, Edinburgh.

Below: images of Amorphophallus konjac, Royal Botanic Garden Edinburgh lowland (wet) tropics glasshouse. Click on an image to read more about it. 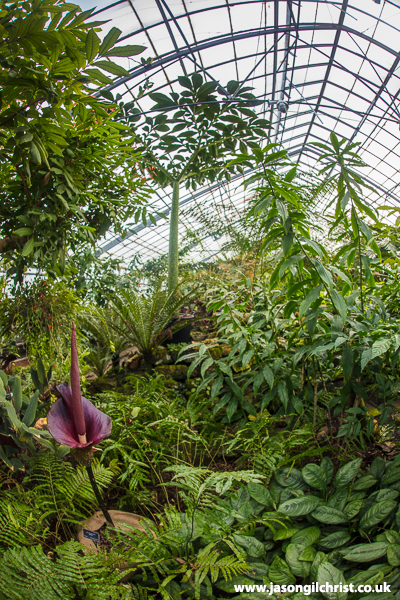 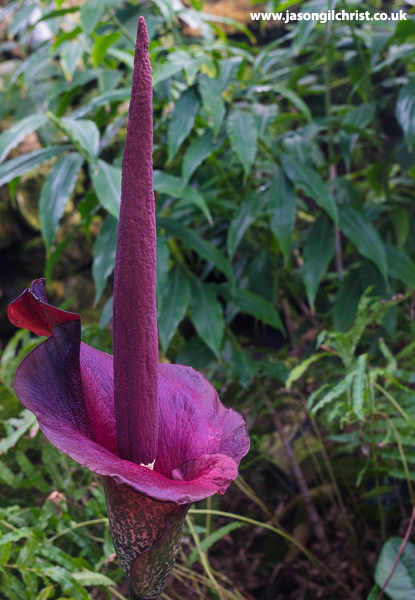 The flower in all its purple glory. 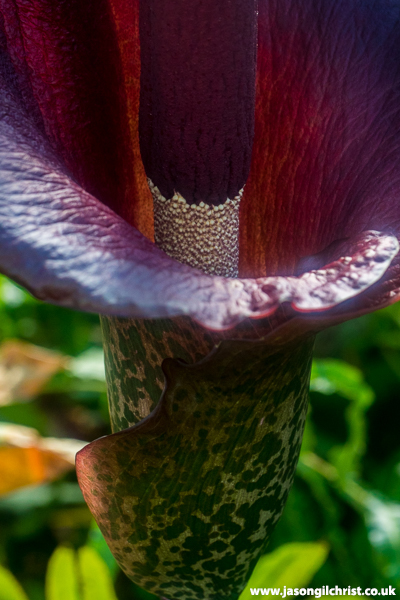 View into the flower of Wee Reekie, Amorphophallus konjac. 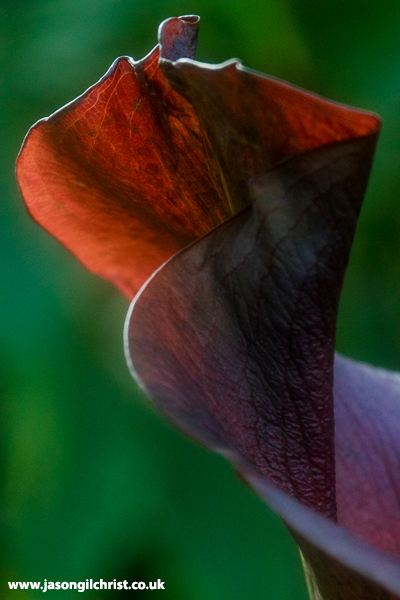 Curves and colour - edge of the spathe of Wee Reekie. 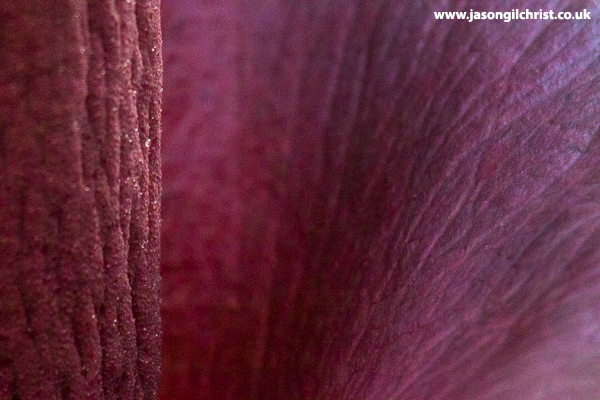 Inside: spadix and spathe of Amorphophallus konjac. 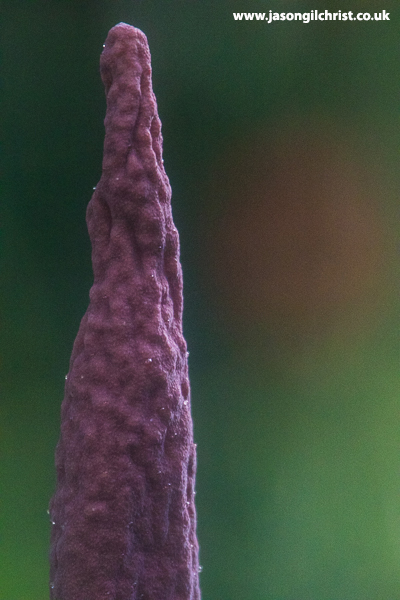 To the point: the tip of the spadix of Wee Reekie. 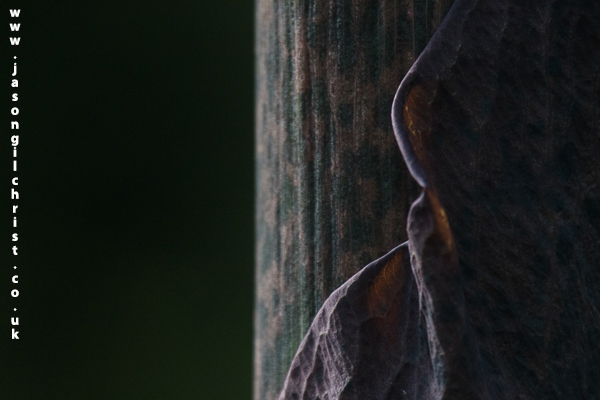 To flower: the second of the two Wee Reekies on display. Flower not quite ready to open. 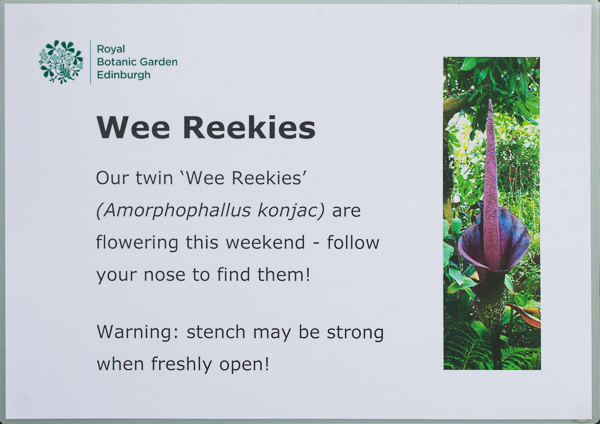 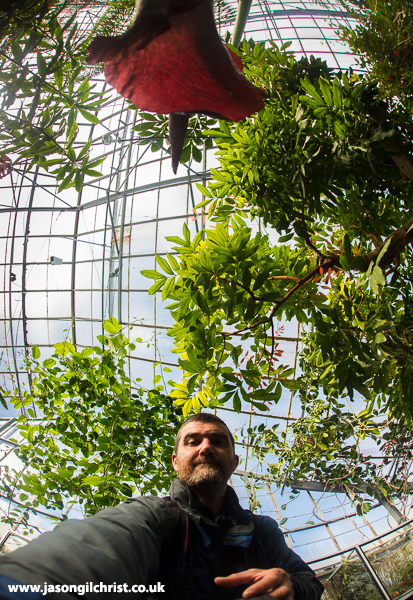 
The lead image (click key [355842] doesn't existBlog and scroll down if you cannot see it) shows Wee Reekie Amorphophallus konjac in the Lowland (Wet) Tropics Glasshouse at the Royal Botanic Garden Edinburgh.

Amorphophallus konjac: Can You Resist the Lure of the Devil’s Tongue? by Tropical Biodiversity