Tyrannosaurus rex and the dinosaur teeth of Skye: Windows into the lives of dead dinos 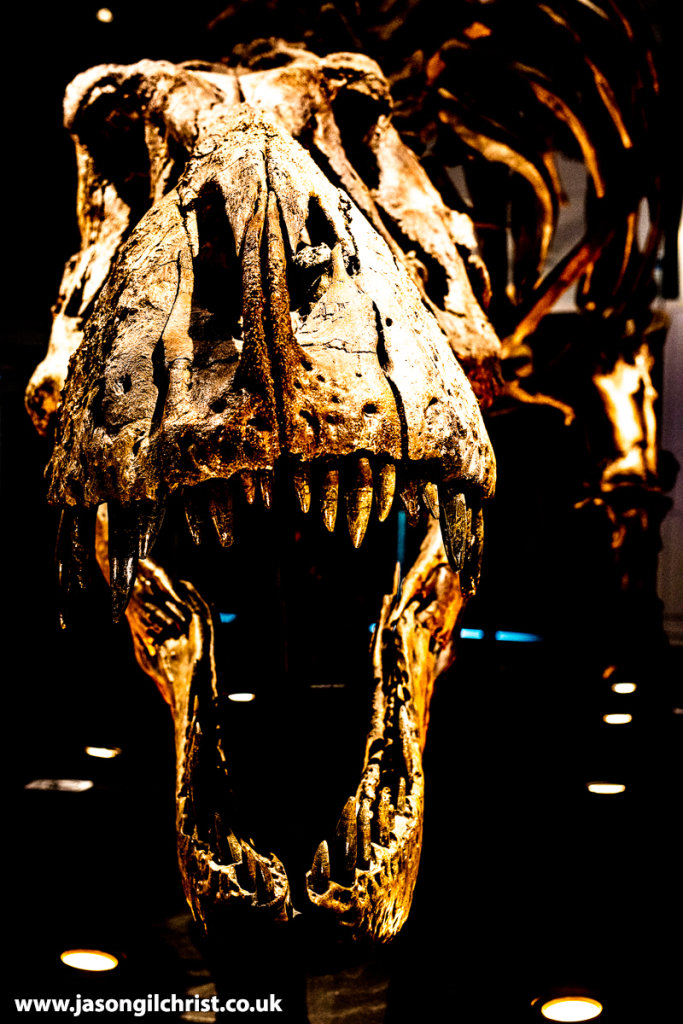 We don’t need a whole lot of fossil material to start to understand the ecosystems of the past. A few teeth can tell us what types of dinosaur roamed the land hundreds of millions of years ago. But, as a recently discovered full skeleton fossil dinosaur reveals, the more pieces of the jigsaw puzzle we have at our disposal, the more we can tell the story of the lives of individual animals.

The light fades over a coastal lagoon. Water laps at the edges. The evening air remains warm and humid. As the sun goes down, some scavengers alight from the carcass upon which they have been feeding. They take to the air. They are pterosaurs.

This is the mid-Jurassic, approximately 167 million years ago. And we are on the Isle of Skye off the north-west coast of Scotland.

The carcass has been butchered, not only by the pterosaurs, but also by carnivorous theropod dinosaurs. Its’ macerated remains lie strewn and scattered, the result of squabbling tug-o-wars, and selfish attempts at escaping the melee with a chunk of flesh. 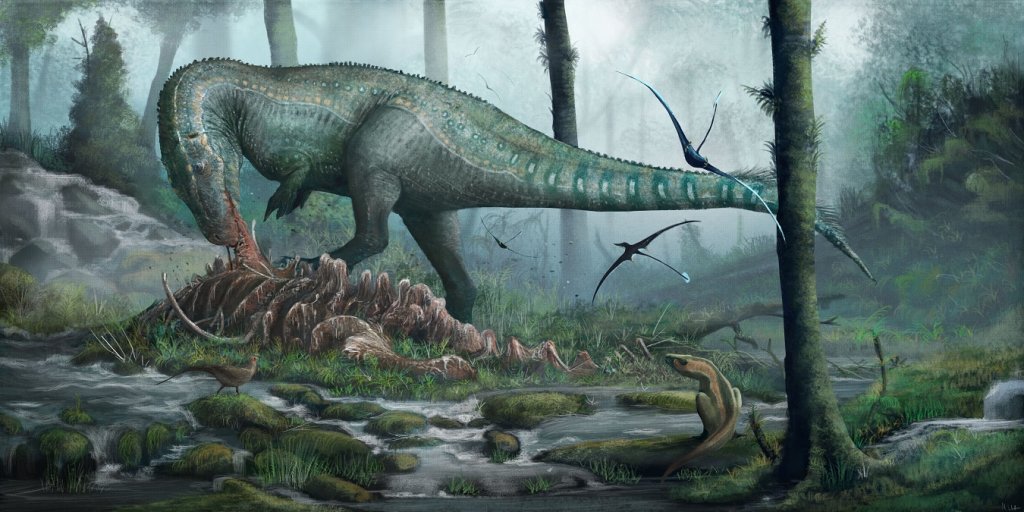 Megalosaurus feeding on a dinosaur carcass. With bonus pterosaurs and other Jurassic beasts. Palaeoart by Mark Witton. Copyright Mark Witton.


Despite the carnage, the dead dinosaur is identifiable. Principally by two features. Its’ feet. Lacking in muscle, the bony tridactyl (3-toed) appendages, lie far apart, discarded by those scavengers, relatively intact and recognisable. The claws are dramatically curved and pointedly sharp. The unlucky dead dino was a predator.

This is further supported by its teeth. Whilst some of the more industrial scavengers may gain nutrition from within the bones, via the marrow, no-one wants to eat teeth. The teeth lie dispersed over a large area. There were lots of them and they are unmistakably carnivorous in nature – with a dagger-like profile and finely serrated edges.

Over the next few days, the scavengers diminish in number, the squabbles decrease in frequency and ferocity. Ultimately, the scene remains with scattered bones and teeth, the flesh and other soft tissue all but gone.

Some of those teeth got fossilised. And subsequently discovered by palaeontologists, in the here and now. Skye is a bit less tropical now, and its biodiversity has changed. But it still holds the evidence of a dramatic past when dinosaurs roamed the land.

In a recent paper by University of Edinburgh School of Geosciences researcher Chloe Young and colleagues, two recent theropod tooth finds from the Isle of Skye are described, alongside a re-evaluation of a previously described tooth. The scientists applied morphometrics, cladistics and phylogenetics to the three teeth in order to endeavour to work out who they belonged to. 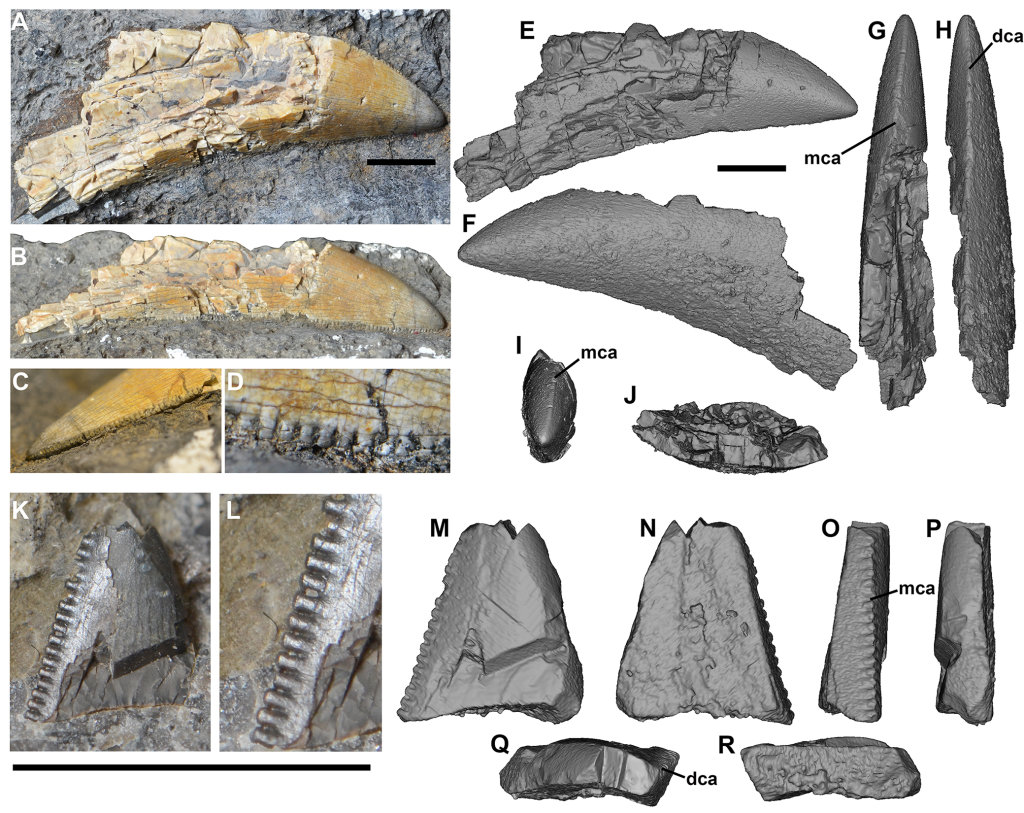 
The teeth were all found in the Trotternish peninsula of the Isle of Skye. Skye is proving productive in revealing fossil vertebrate material from a relatively mysterious period of earth history – the mid-Jurassic, approximately 167 million years ago. I have visited the area myself, to experience its’ dinosaur footprints. 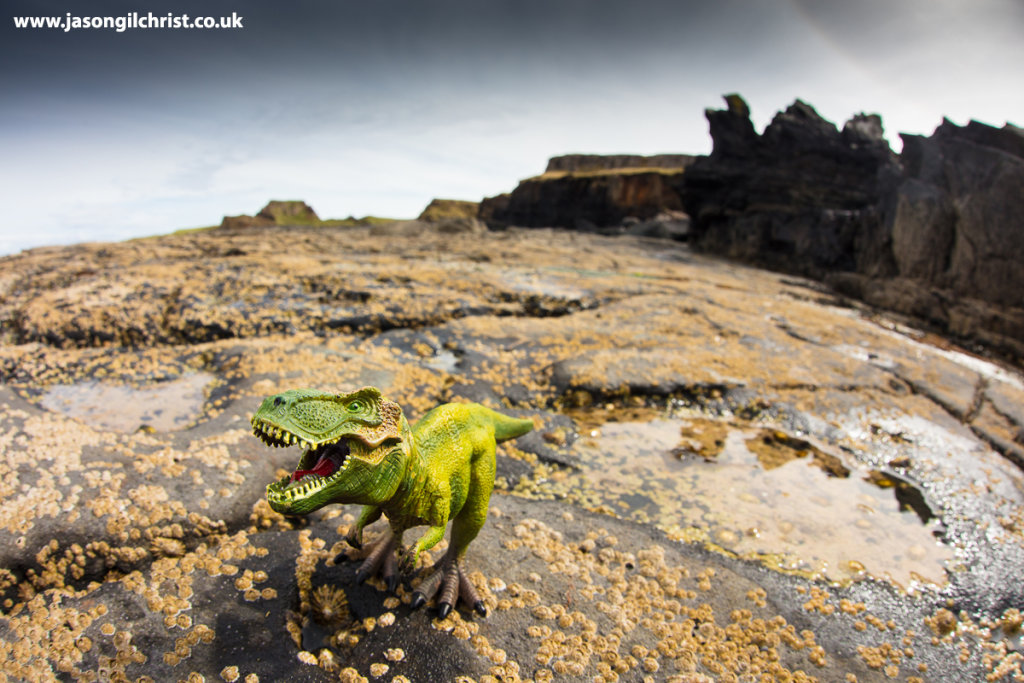 Theropod dinosaur re-imagined, between fossil sauropod footprints, at Brother's Point on the Isle of Skye, Scotland.


Tooth taxonomy is not easy, even with intact fossil teeth in good condition, so there is a limit to the level of resolution that can be attained with just a single tooth to go on. Nevertheless, the scientists conclude that the teeth probably belonged to different species of theropod (predatory) dinosaur. Likely candidates include allosauroids, ceratosaurs or megalosauroids. 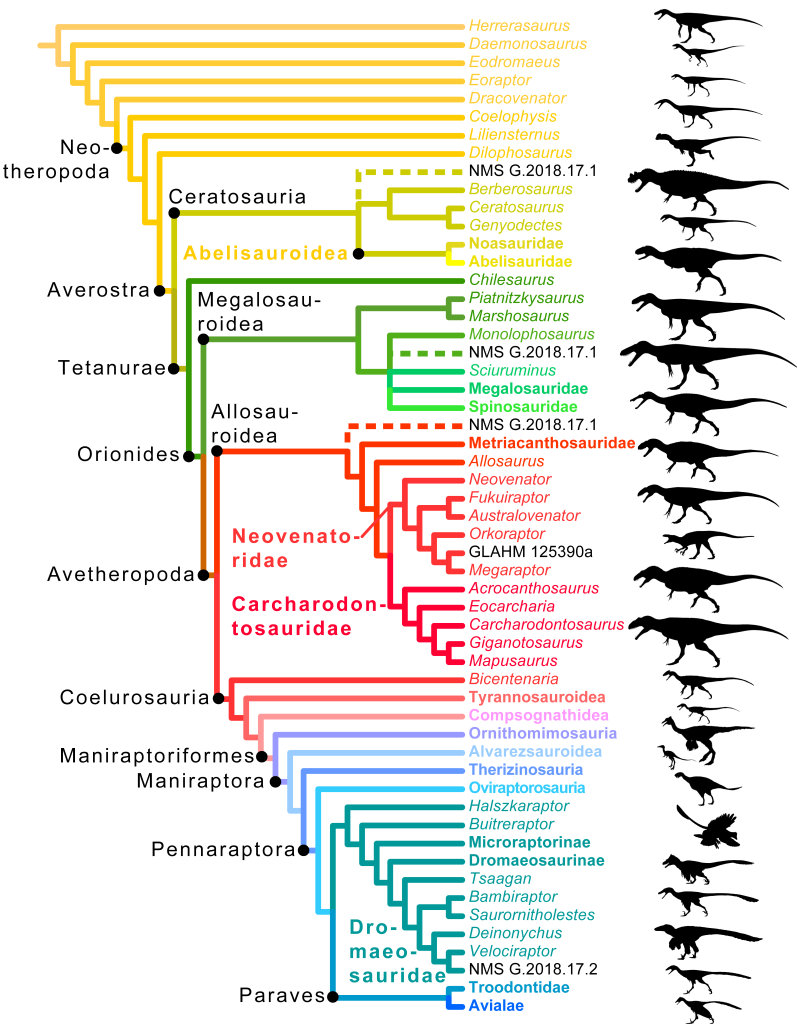 
The largest tooth has a crown height of 5.9cm. That is quite a bit smaller than the largest carnivorous dinosaur tooth ever found (at 30cm), but the teeth in a theropod jaw were variable (heterodont) in shape and size, so the big Skye tooth may not have been the biggest in the animal’s jaw. According to Dr. Steve Brusatte, co-author on the paper, the larger of the teeth is likely from a Megalosaurus-sized theropod.

What the teeth tell us is that large predatory dinosaurs walked this way. Together with the local footprint finds, we know that at least some of these carnivorous dinosaurs were large. This suggests that there were large herbivorous dinosaurs, and likely lots of them, to sate the appetite of these terrestrial mega-predators, the size of which we do not get anywhere near experiencing today.

Few dinosaur skeletal remains have been discovered on Scotland’s ‘dinosaur isle’ but they include thyreophoran (stegosaur-like), and sauropod (think Diplodocus) material. However, there are numerous dinosaur footprint discoveries, including ornithopod (Iguandon-like) footprints, the ‘dinosaur disco’ at Duntulm, and ‘dinosaur hang-out’ at Brother’s Point. Both of which include large sauropod prints.

Duntulm and Brother’s Point, along with nearby Staffin, also feature some of those characteristic 3-clawed tridactyl theropod footprints. Skye’s theropod footprints come in lots of different sizes, indicating a range of ages and/or species of predatory dinosaur. Tantalisingly, the largest Skye theropod footprint is represented by only a single impression of over 100cm. This is within the range of the largest of carnivorous dinosaurs….

…one of which, Scotland was temporarily home to. An immigrant. Bigger and later than the theropod dinosaurs frequenting Skye. Glasgow housed a celebrity visitor, the most famous of the dinosaurs, the iconic Tyrannosaurus rex.

Specifically, Trix, an adult female T. rex who trod the Earth a mere 66 million years ago (the Cretaceous), not so long before the dinosaurs (birds excepted) were wiped out in a massive global geo-catastrophe. 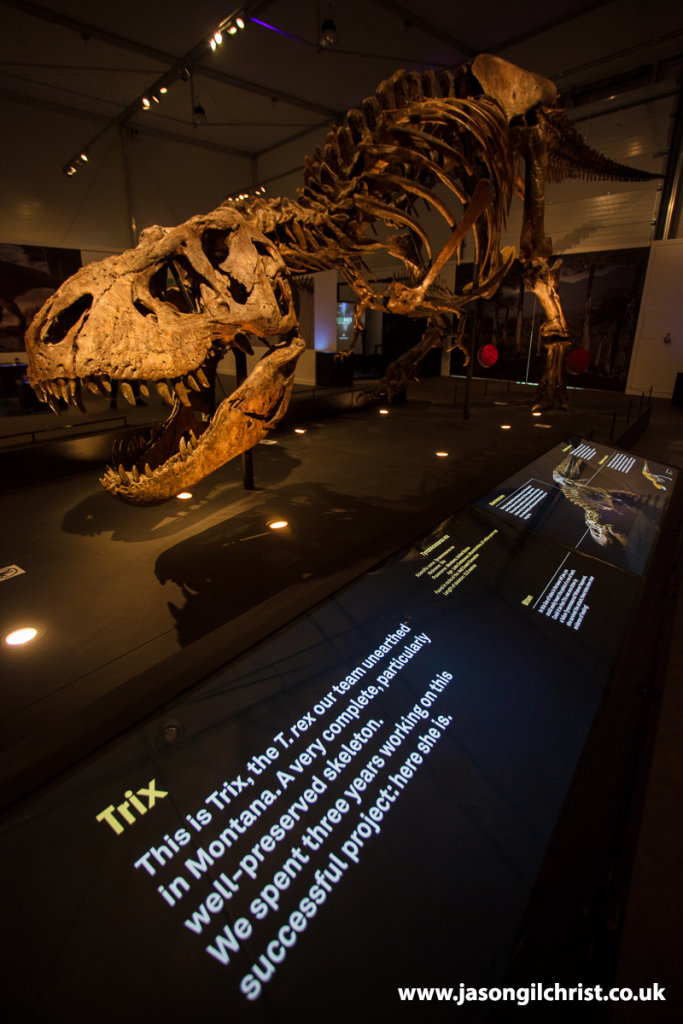 Trix, the Tyrannosaurus rex, at the Kelvin Hall, Glasgow.

Trix is the oldest known tyrannosaurus, at over 30 years old at death. She is also the world’s third most complete T. rex fossil. 80% of the bone volume is present. Collected from the Hell Creek Formation, in Montana, she is one of only two substantial specimens resident outwith the USA, and the only one to visit the United Kingdom. Glasgow is the final stop on Trix’s European tour before she returns ‘home’ to the Naturalis Biodiversity Center, Leiden, Netherlands.

Museum exhibits enable us to appreciate, not only the natural history of a species, via its anatomy, but also the story of the individual. The fossilised bones of Trix give us an insight into the life of the individual as well as the species. 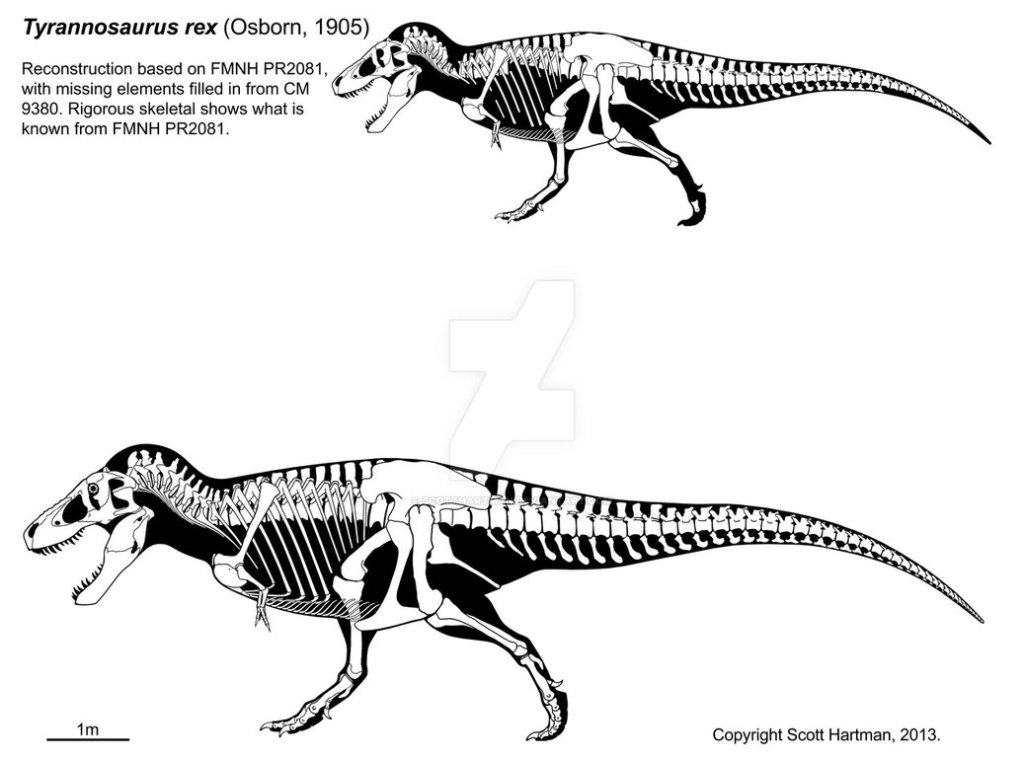 
Firstly, Trix is big. With a height at the hip of ~3.73m, she stands taller than an African elephant, the largest extant terrestrial animal. She is mounted, not upstanding, with head towering above her awe-struck admirers, but stooped, head only just above the ground. One gets the impression of an inquisitive predator, crouched with sensory organs trained on her next potential meal, eyes and nose honed on nearby prey. Which, when I visited, was families with young kids. 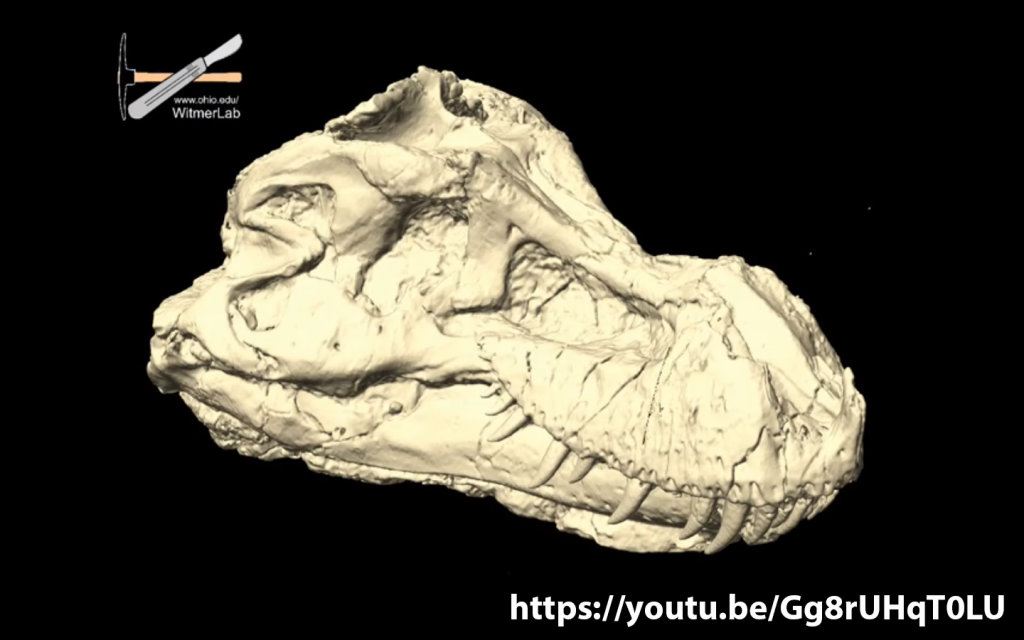 
A notable feature, with the skull at child’s eye-level, is the many pencil-diameter holes along the upper and lower jaw margins, not unlike similar structures in crocodilian skulls. Dr. Neil Clark, Curator of Palaeontology at The Hunterian explains, “There has been quite a lot of discussion on the purpose of the small holes on the upper and lower jaws. One theory is that T. rex had lips and that the holes were the blood supply to them. The enamel of the teeth is particularly well-preserved suggesting that the teeth were not exposed like they are in crocodiles. The other option is that they have some sort of sensory function.” Recent science indicates that T. rex was highly-sensitive to smell, with a high proportion of its brain and even its’ DNA devoted to sensory capacity.

But, look beyond the sheer scale of the animal, and we can appreciate more subtle clues to the life experiences of a T. rex. Trix displays a number of pathologies, evidence of damage and disease, in her skeleton. Her upper tail vertebrae grew deformed, she had carried a substantial nasal infection (leading to the nickname ‘grandma pusface’) and numerous broken ribs, and there is damage to her lower jaw, holes, suggestive of bite marks, likely incurred via conflict with another T. rex. There is additional evidence of other bite and scratch marks. Despite all the evidence of injury and infection, Trix survived well into adulthood. And thanks to a bit of luck (Trix was buried in a massive flash flood shortly after death), post-death she also (mostly) avoided the attention of scavengers and endured the fossilisation process with minimal anatomical disruption, to give us a privileged insight into the life of a mega-predator. There is, however, potential evidence of scavenging – with the absence of forelimbs and feet, some of her bones showing possible signs of gnawing, and a single Nanotyrannus tooth excavated by the carcass. 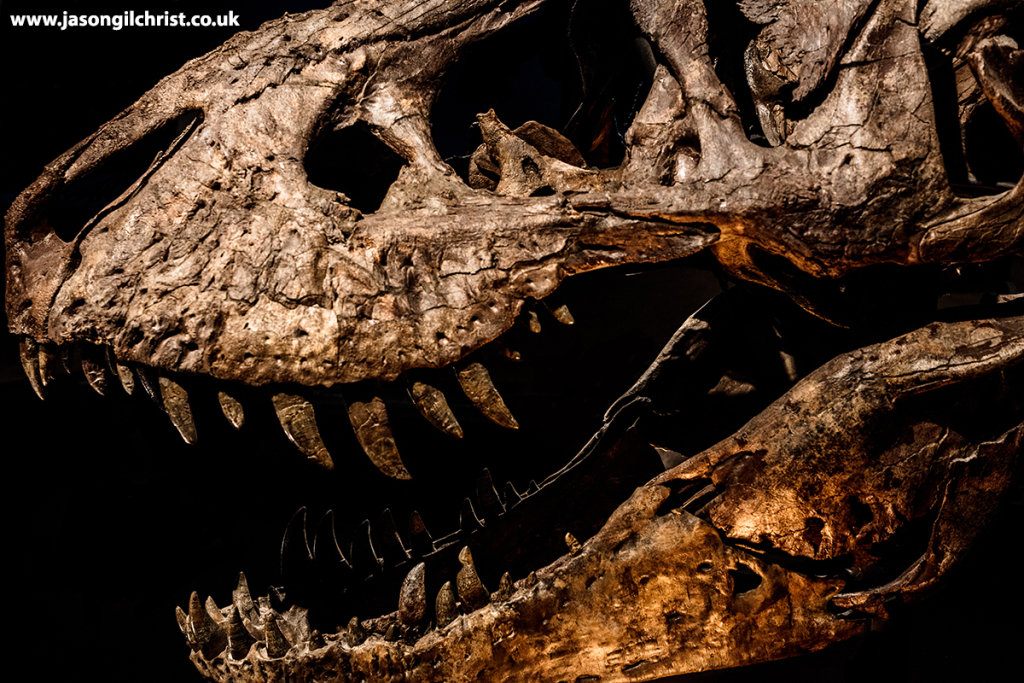 Skull of Trix, the Tyrannosaurus rex. The skull shows visible evidence of trauma - with scratch marks on the upper jaw, and puncture holes on the lower jaw.

I am a behavioural ecologist – I study how animals live their lives - and how species fit together in ecosystems. Behavioural ecology is ultimately about life, death, and sex, with anatomy and physiology thrown in.

Whilst the days of the dinosaurs, all those millions of years ago, may seem very dissimilar from the world today, they were not so different. The Mesozoic dinosaur-filled worlds were populated with a diversity of ecological communities, populated by an abundance of different taxa. There were predators, there were prey. Fossil evidence points to behavioural dynamics familiar to us in contemporary species: sociality, parental care, cannibalism.

The Skye theropod teeth and the pathologies of Trix inform us of the behavioural ecology of those dinosaurs and the wider ecological community. That includes the insight provided by the Skye teeth (and footprints) into which dinosaurs occupied the ecological niches available on Skye back in the mid-Jurassic. The pathologies of Trix are exceptional in the detailed window that the specimen gives us into the physiological trauma experienced during life (including injuries experienced likely during hunting, fighting, and possibly sex).

Palaeontology can tell a story of the behavioural ecology of past species and ecosystems, informed by the fossils, and our knowledge based on extant taxa and habitats. Palaeoart, informed by science, literally paints a picture of those species, in their environments, interacting with each other. 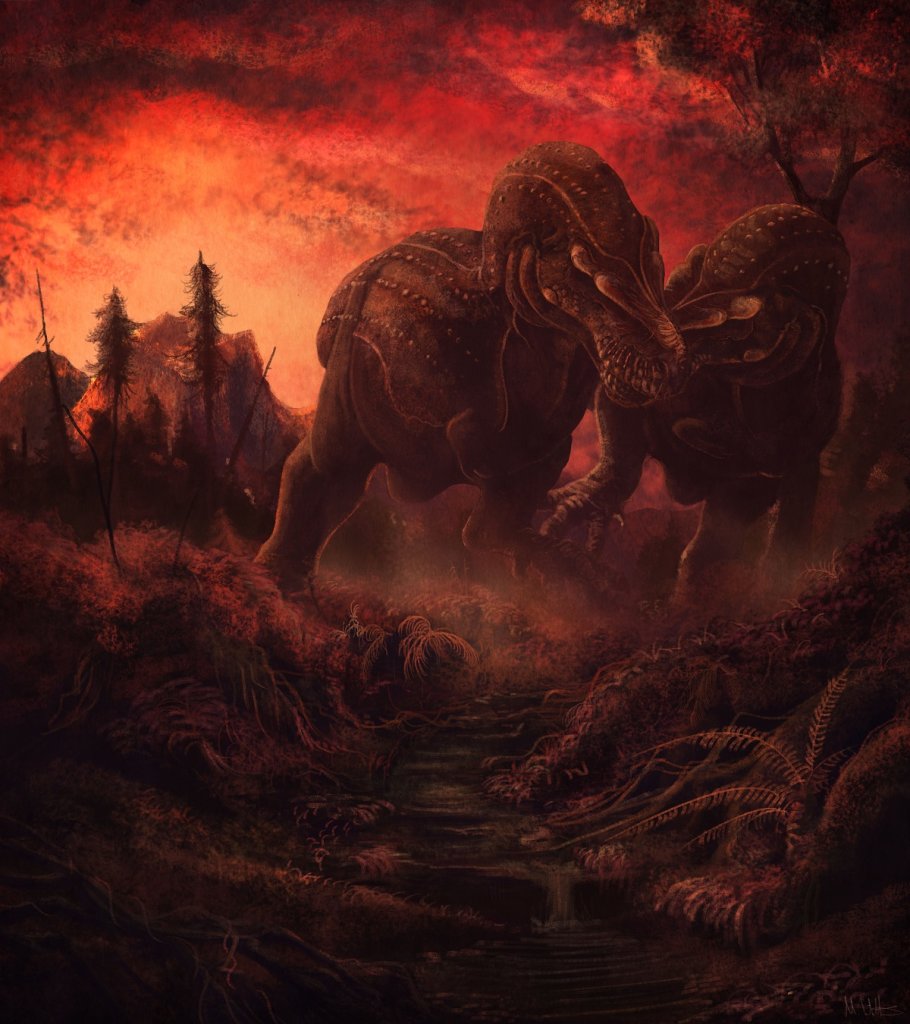 The dinosaurs dominated the vertebrate fauna for a sustained period. Ultimately, they were exterminated by a major natural environmental catastrophe. Today, in the Anthropocene, we continue to systematically remove large predators, and even large herbivores from ecosystems (as humans have done historically). Lions and tigers are at increasing risk of extinction. Elephants and rhino are among the endangered mega-herbivores.

We exist within an era of self-inflicted biodiversity crisis. Do we want to be responsible for erasing species, for future generations to view as dead as the dinosaurs?

We also need to question the immortality of our own species… The dinosaurs were incredibly evolutionary innovative, yet despite their success and dominance, they were ultimately extinguished (read this wonderful excerpt from Professor Ken Lacovara's ode to the dinosauria - Why Dinosaurs Matter). 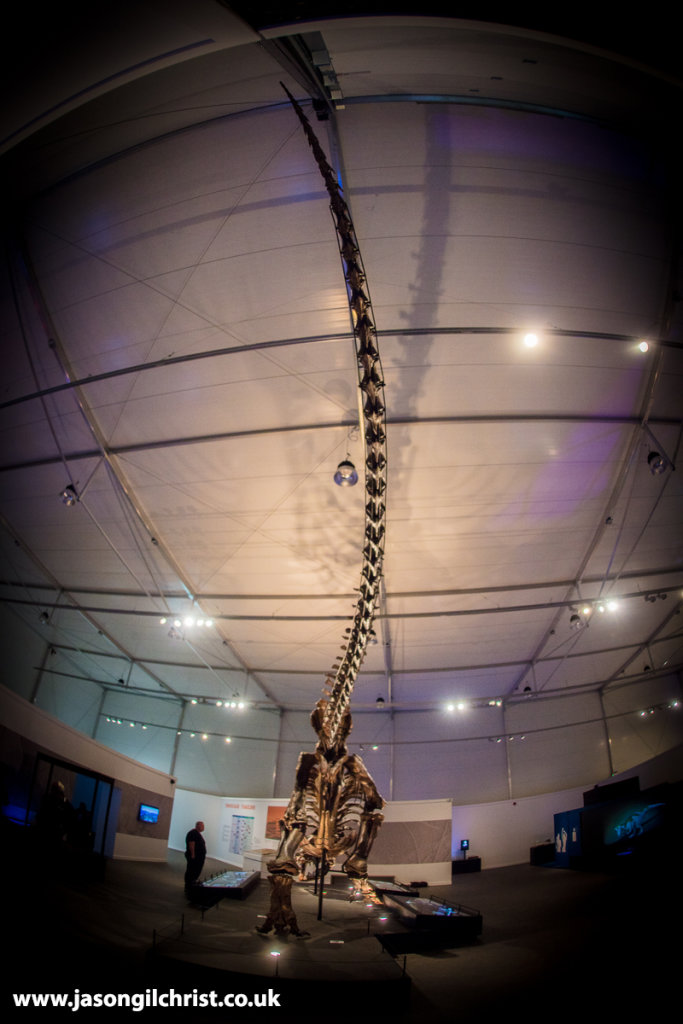 Trix, the Tyrannosaurus rex, the other end. Will we view other animals, with us today, gone tomorrow, extinct, in the same light as the (non-avian) dinosaurs?


The Future for Skye’s dinosaurs…

There is more to come, from Trix and the Isle of Skye, much more. Dr Anne Schulp of Naturalis, dinosaur-hunter and Trix discoverer says “Not much has been published just yet. Stay tuned for the publications from ongoing research [into Trix].”

From Skye, three pterosaur specimens are currently being examined. There may be other large vertebrate bones in museums to be processed, and fossil-hunting expeditions continue to take place on an annual basis, via the PalAlba palaeontology group and others. Watch this space. The mid-Jurassic dinosaur community of Scotland is likely to get bigger, in diversity and body size, as the science continues. 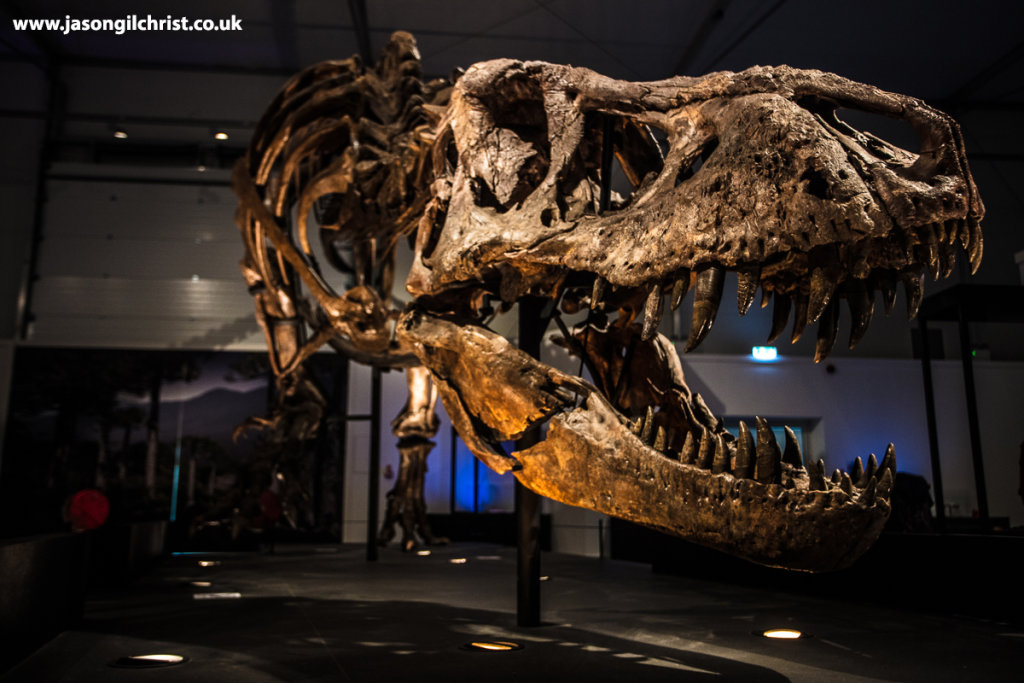 She's coming for ya! Trix, the T. rex, in dynamic predatory pose at the Kelvin Hall, Glasgow. She will get back in her crate and head back to the Naturalis Biodiversity Center in Leiden on 31st July 2019.