New Reekie 3 and the Power of Plants

Here it comes (and goes) again…

Much to everyone’s surprise, the titan arum plant at Royal Botanic Garden Edinburgh (RBGE) has flowered again, in June 2019. That is the 3rd time since its first flowering in 2015 (followed by 2017), which came after 8 years of careful horticultural care. It is the only titan arum to have flowered in Scotland.

Titan arum, Amorphophallus titanum, also known as the giant corpse flower (buna bangkai), is famous for its smell, but it also looks mighty impressive. And RBGE’s flower has grown at an astounding rate, and to an incredible size. It has topped out at 281 cm (over 9 feet) tall. The tallest known Amorphophallus titanum in the world. Breaking records is becoming a habit; its 2010 the corm weighed in as the heaviest in the world at over 153 kg.

The RBGE have been tracking New Reekie’s daily growth at 1pm every day at a ceremonial (and scientific) measuring, producing a daily growth chart. Over a period of 25 days, New Reekie increased in height from 59.5 cm to 281 cm (that is 221.5 cm in 25 days). At its peak growth, it increased in height by 18.5 cm in 24 hours. Bear in mind that height is a linear metric – and that New Reekie is three dimensional and not particularly thin – so the biomass that it is accumulating on a daily basis is remarkable. The plant is converting energy and nutrients into reproductive tissue at a ridiculously rapid rate.

What a wonderful demonstration of the power of nature – of plants to convert solar energy (sunlight) into biomass, via photosynthesis. In this case; purely for the purpose of reproduction. The flower of an Angiosperm (a flowering plant) has one purpose, one purpose only, sex, reproduction. It is produced to perpetuate the genes of the parent plant, and the flower dies once its job is done. The flower of titan arum is a marvellous graphic (and phallic) example of just how much effort organisms will invest in (attempting to attain) reproductive success.

The problem for any titan arum is that the female parts (the stigmata) need pollen from another flowering titan arum. Amorphophallus titanum cannot self-pollinate (the stigmata of a flower cannot be fertilised by the pollen of the same plant).

In botanic gardens this is an issue, because usually there is only a single plant, or offspring of a single plant. So, the horticultural staff at RBGE have had to engage in some assisted reproduction. With Amorphophallus titanum pollen imported from the Eden Project, an incision was made at the base of the New Reekie flower, and a ‘window’ was cut, to enable pollen to be brushed onto the female stigmata using a humble paintbrush. Now everyone has to wait. It is not always successful, and both of New Reekie’s 2015 and 2017 flowerings and assisted pollination failed to provide fertile offspring. However, if successful, Titan arum can be somewhat productive: Cambridge University Botanic Garden produced a titan army of 160 Amorphophallus titanum seedlings.

In the wild, the problem (re. procreation) for titan arum is its rarity. With so few wild Amorphophallus titanum, reliable transport of pollen from one flowering Titan to another becomes ever more unlikely the rarer that the plant becomes. Titan arum is classified as Endangered by the IUCN Red List.

Amorphophallus titanum flowers for only 2-3 days at a time, and does so rarely (that New Reekie has flowered 3 times in 6 years is unprecedented). Add to that the fact that the pungent attractive aroma, a cocktail of chemicals that produces a smell combining cheese, sweaty feet and rotten fish, which is necessary to attract pollinating insects, lasts only for a few hours [the evening of 23rd June 2019 for New Reekie 3]… and you would be forgiven for thinking that Titan arum does not want to survive. Ofcourse, in the wild the species has persisted quite nicely for a very long time. Its endangerment comes due to negative human impacts on its environment, via habitat loss due to logging and agriculture, and directly via plant collecting.

Titan arum is famously ‘the smelliest flower in the world’. Perhaps all the more famous, because the smell is not pleasant. Or at least not pleasant or attractive to us (humans). The smell is apparently attractive to a particular ecological guild of invertebrate. The carrion feeding insects.

There are species of fly and beetle that specialise in feeding and breeding on dead things. To these guys, rotting flesh is the perfect setting for a romantic liaison, or child rearing. It is warm, it is moist, and there is a readily accessible food supply. What's not to like? In its native Sumatra, blow flies, sweat bees and carrion beetles are drawn to the flowering Amorphophallus titanum. Attracted to titan arum, the insects wander about seeking their rotting fleshy reward, but are left disappointed. However, in the process of frustrated wandering, they inadvertently pick up pollen. Off they fly, looking for the real deal, some unfortunate dead animal, and ideally (for titan arum) along the way arrive at another Amorphophallus titanum and wander about its flower, again seeking a dead meat reward. This time, however, the insects deliver the pollen from the previously visited flower. The plant is parasitising the insects – by fooling the carrion feeders and breeders into delivering its pollen between flowers – to titan arum’s benefit and to the cost (wasted time and energy) of the unintentional pollinators.

At RBGE there is no ‘other’ flowering titan arum synchronised with New Reekie, and even if there was, it is a long way from home (Sumatra) and therefore there are none of Amorphophallus titanum’s natural pollinators. That however, did not stop Ashleigh Whiffin, Assistant Curator of Entomology at the National Museum of Scotland running an experiment to see if Scottish blow flies would respond to the lure of New Reekie. They didn’t. However, there was a surprise visit by a Scottish carrion beetle, Necrodes littoralis. This is exciting because this beetle was not part of a scientific experiment (i.e. not introduced and released into the glasshouse) but found its own way into the glasshouse from outside to visit the flowering Amorphophallus titanum. This brought much joy to Ashleigh as an Organiser for Silphidae UK (the organisation responsible for recording carrion beetles in Britain). Read more about the experiment at Scent of Seduction.

Whilst brief in its flowering, and even briefer in its pungency, the amazing lifecycle of Amorphophallus titanum is a fantastic introduction to the wonders of the botanical world. There are many weird and wonderful plants out there. Titan arum is definitely one of the weirdest. Go see one if you can.

As the glory of Edinburgh's Amorphophallus titanum flower fades and New Reekie waves goodbye (for now) you can still experience its beauty and wonder, alongside other weird plants via the (appropriately named) Weird Plants art exhibition (the eye-catching botanical art of Chris Thorogood) at the Royal Botanic Garden Edinburgh. 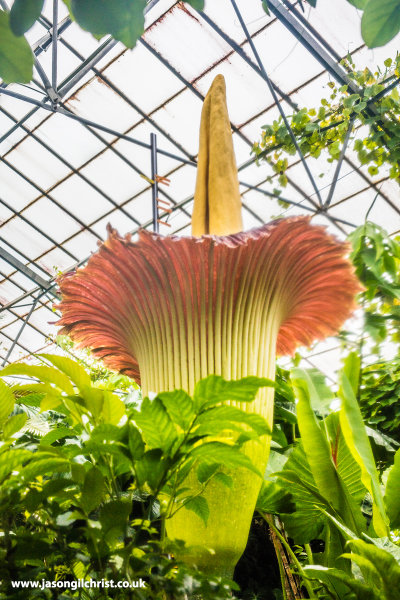 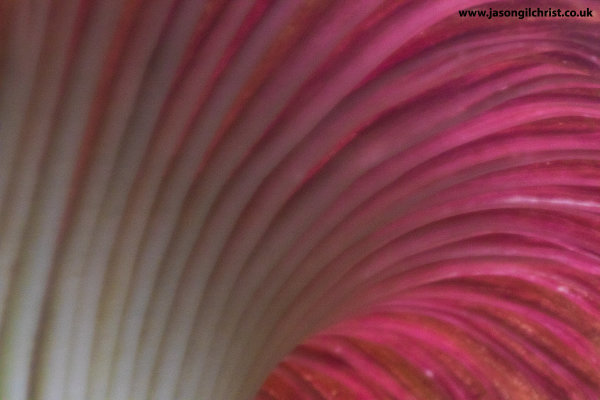 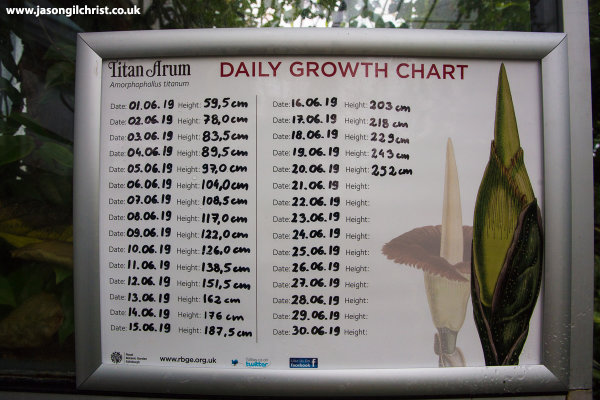 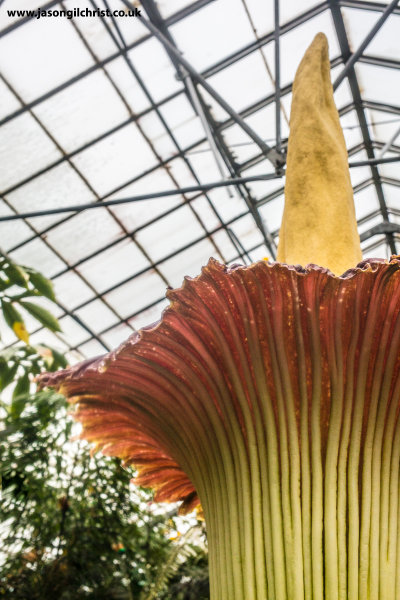 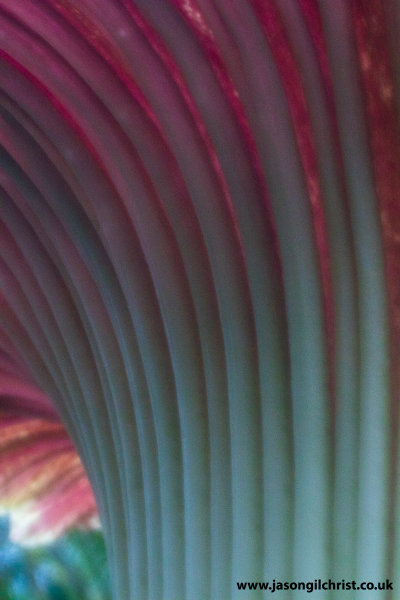 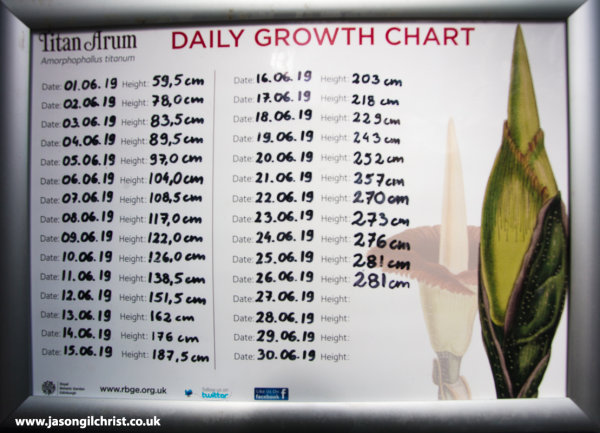 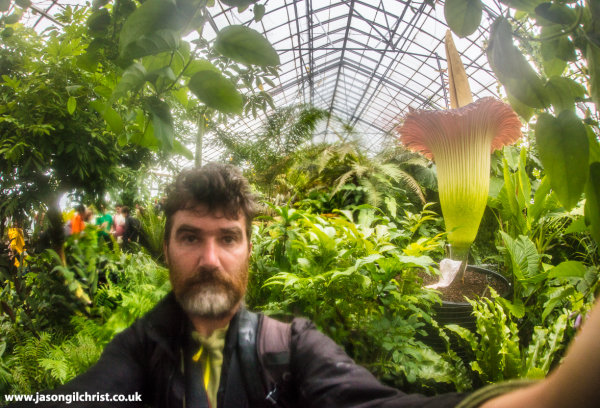 Selfie with Titan arum (Amorphophallus titanum). Whilst I look like I am seriously worried about being grabbed by a Triffid in the glasshouse, I am actually really happy to be in the company of such an exceptional flower.


The lead image(click Blog and scroll down if you cannot see it) shows New Reekie Amorphophallus titanum amongst its neighbours in the Lowland (Wet) Tropics Glasshouse at the Royal Botanic Garden Edinburgh.

To see more photos, including images of the wilting and the 'big flop', visit my Titan arum - at the Royal Botanic Garden Edinburgh Photo Gallery.