This Blog is an extended take on Dinosaur egg bonanza gives vital clues about prehistoric parenting published in The Conversation. This version features additional points, detail, links and images.

Fossils, what are they? Basically rock. Ok, they can tell us what an animal looked like, and perhaps a bit about the environment that it lived in. But with the youngest dinosaur fossils over 66 million years old, meaning the animals that they represent last lived and breathed a very long time ago. What can they possibly tell us about dinosaur behavioural ecology? And then there are eggs. What on earth can a fossil dinosaur egg tell us about the behaviour of the dinosaur that laid it? 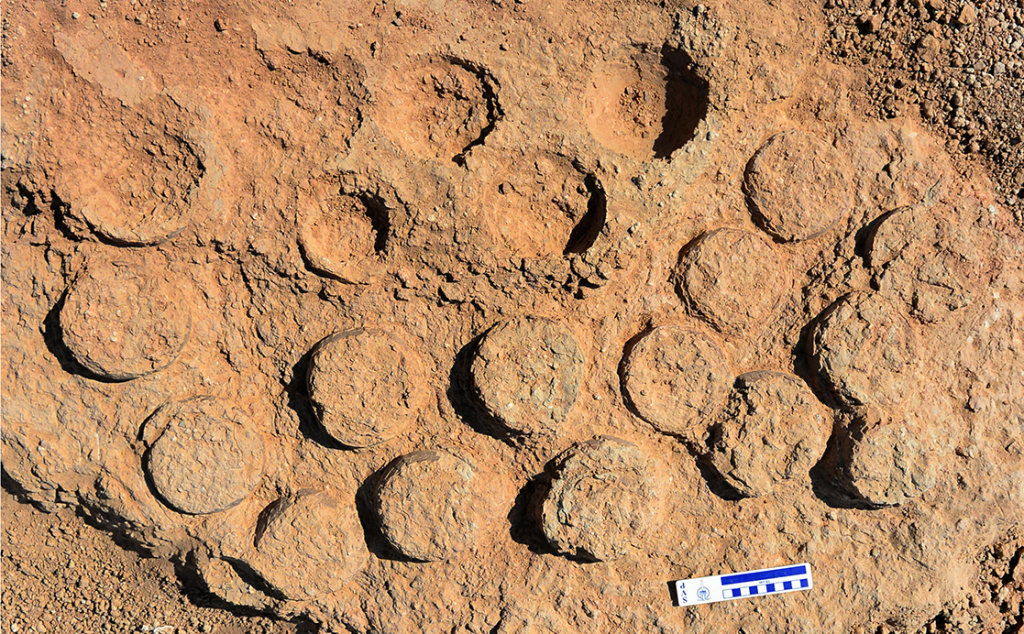 
Tanaka et al (2019), in a recent paper in Geology, Exceptional preservation of a Late Cretaceous dinosaur nesting site from Mongolia reveals colonial nesting behavior in a non-avian theropod, provide the strongest evidence yet of colonial nesting, and nest attendance/protection, in dinosaurs. A new nest site in the Gobi Desert of Mongolia revealed 15 egg clutches of non-avian theropod (predatory) dinosaurs.

The spherically-shaped eggs are between 10 and 15 cm diameter (for comparison, the largest extant bird egg, the ostrich is ~12.5cm diameter, into which you could fit ~ 24 chicken eggs). The eggs were laid in clutches of 3 to 30 eggs.

The provenance (geological context) of these eggs indicates that all the eggs were laid and hatched in the same nesting season, and that the egg clutches were covered by or buried in organic-rich material by the parents during incubation. The habitat that the dinosaurs nested in was a seasonally arid flood plain. The high hatching success rate (60%) is akin to that observed in contemporary bird and crocodilian species that protect their eggs from predation, leading to the inference that the dinosaurs who laid these eggs invested in parental care.


Who laid the eggs, and when?

Dinosaur eggs are classified into oofamilies, in the same way that dinosaur footprints (that I have written about previously: see The Skye Dinosaur Footprint Vandal, and Walking the Footsteps of Dinosaurs) are classified into ichnotaxa. Why? Because unless a footprint has the fossilised skeleton of the footprint-maker, or the egg has a direct association with a skeleton, there is no way of identifying the species of a trace fossil with species-level confidence. 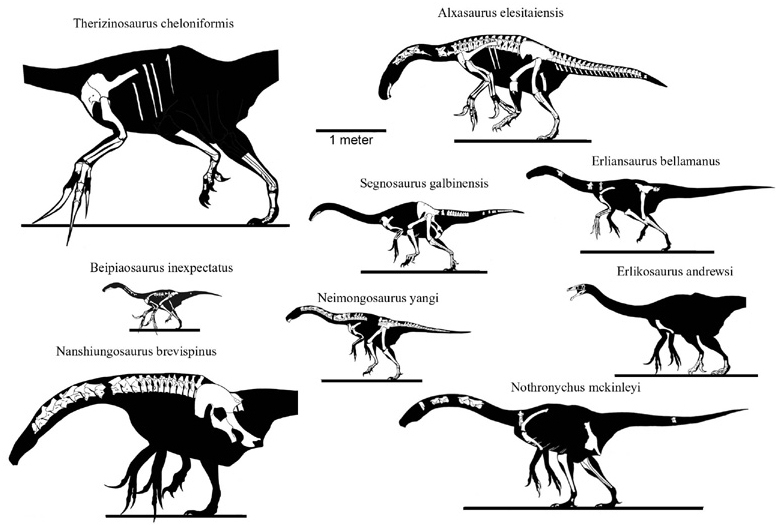 Therizinosaur skeletons by Jaime A. Headden (User:Qilong), CC BY 3.0. 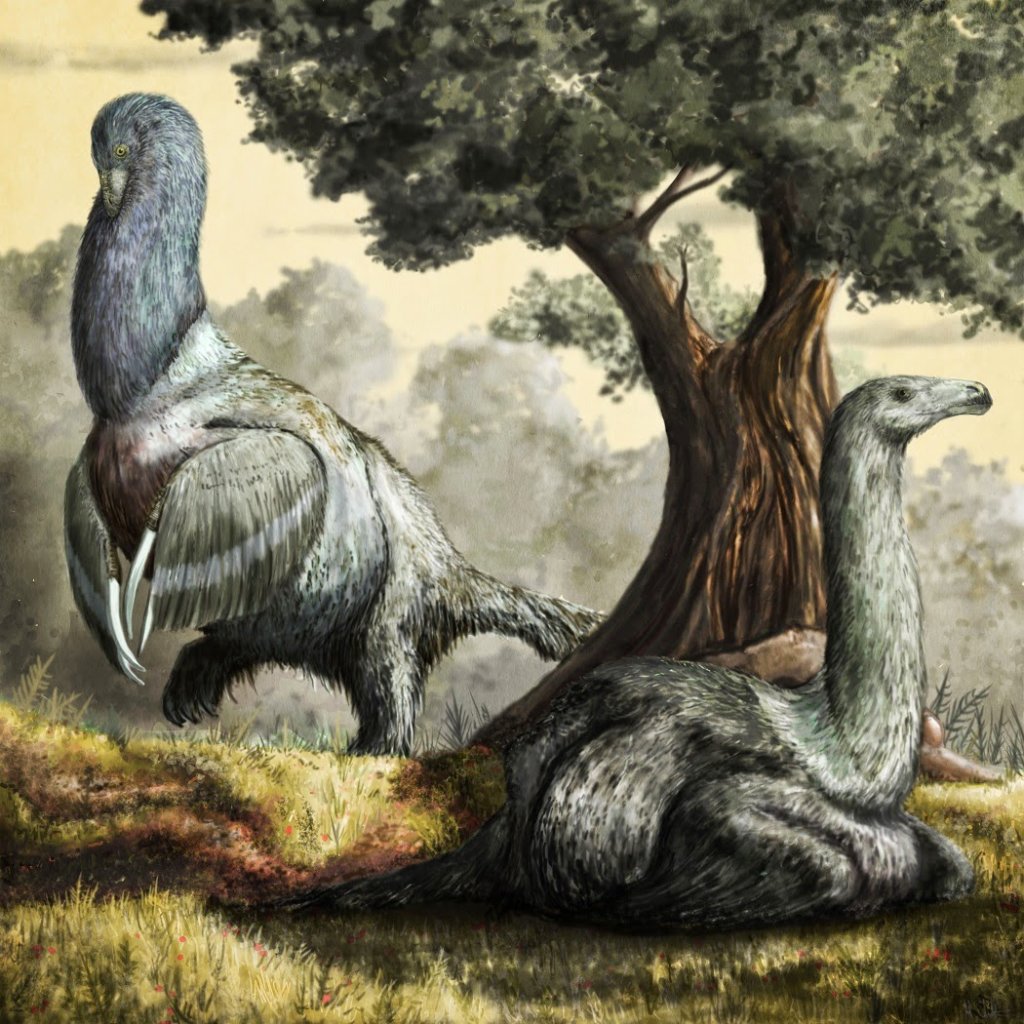 
On this basis, the Javkhlant eggs were likely laid by Dendroolithid dinosaurs. Via comparison with fossilised remains (elsewhere) where eggs have been found with embryonic skeletal remains within, and dinosaur biogeography, the likely dinosaur family is Therizinosauroidea. 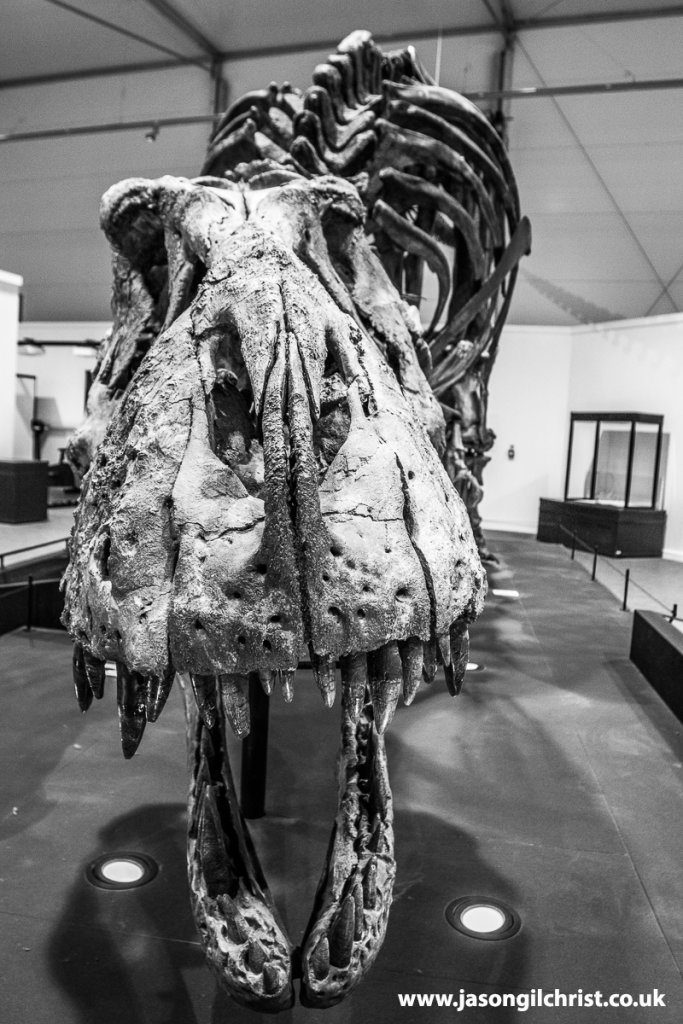 
The Javkhlant site dates from the Upper Cretaceous, toward the end of the reign of the dinosaurs (66 million years ago). The theropods, at their (literal) height, were represented by Tyrannosaurus rex, the 5-tonne giant predator, who died out alongside all the other non-avian theropods, leaving the birds (avian dinosaurs) to continue the dinosaurial lineage into the subsequent Age of Mammals, within which we live. 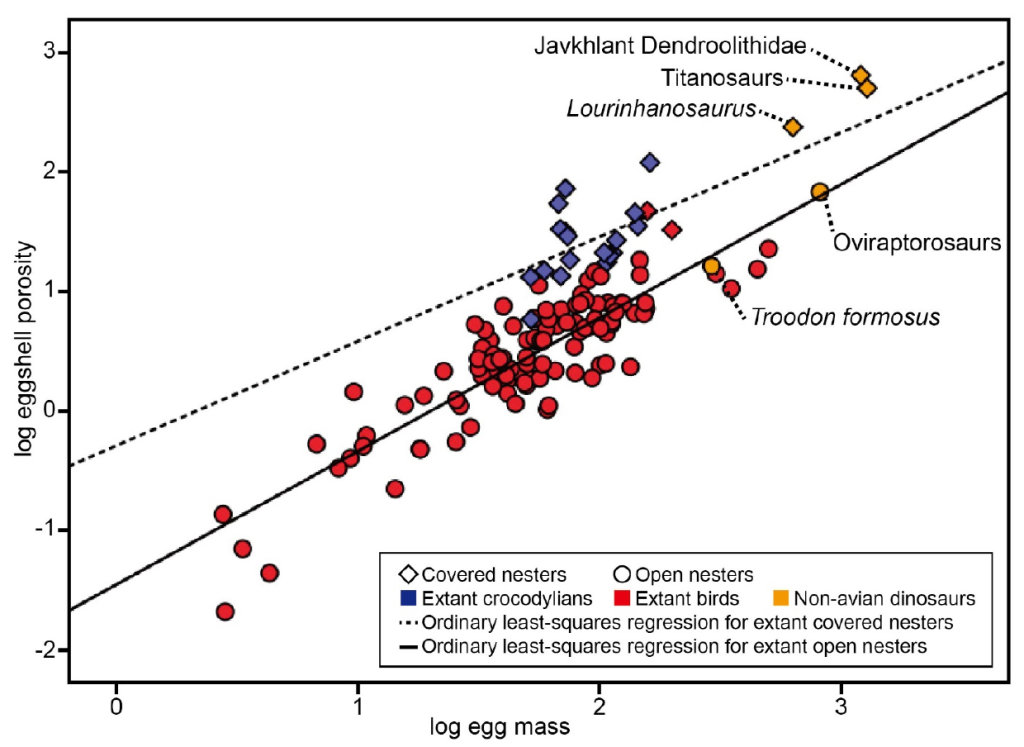 
Eggshells need pores (canals) to allow gas exchange, i.e. to enable the developing embryo to breathe during incubation. Damp environments with low oxygen are characterised by high porosity (pore density and area): to maximise gas exchange with little constraint re. water loss. Open nests need less porosity because they have more oxygen available, and in arid environments, porosity has to be low to minimise water loss.


Ostrich, for example, have a low pore density of ~ 7.17 per mm2. In contrast, the Javkhlant eggs show a pore density of 13.46 pores/mm2. This level of porosity indicates that these Therizinosauroid eggs were incubating in a moist, low oxygen environment. Comparing with data from extant archosaurs (birds and crocodilians), the Javkhlant eggs were covered or buried for incubation. Such behaviour is something, within the modern birds, that we see in Australasian megapodes, e.g. mallee fowl, Leipoa ocellata. Crocodilians are also incubator-nesters, burying their eggs for incubation. 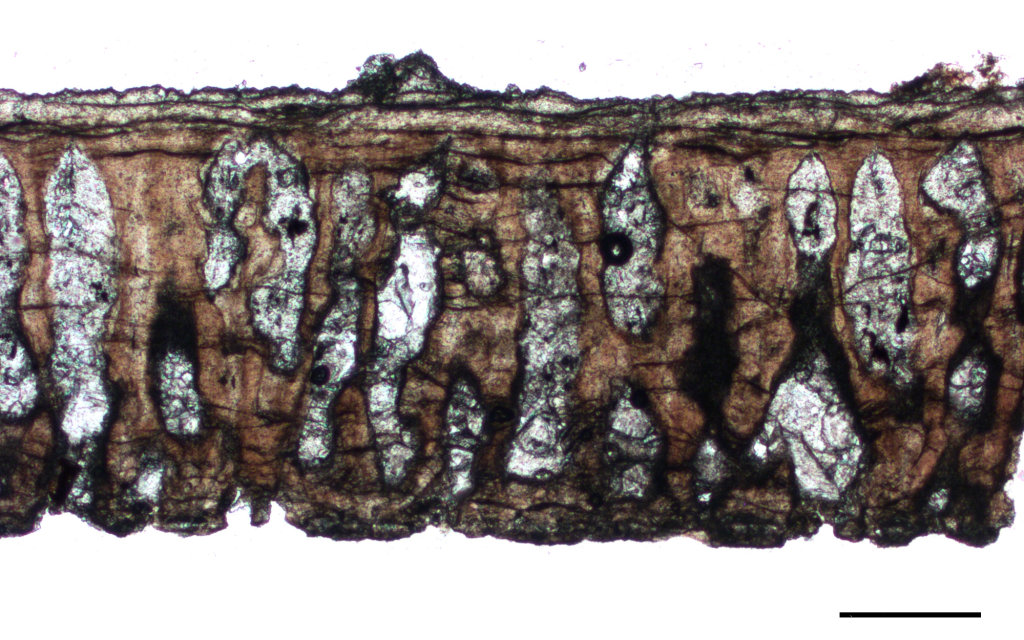 
It is therefore likely that, as for mallee fowl, the Javkhlant eggs were covered in organic-rich material, the rotting of which generated heat to facilitate embryonic development within the eggs. 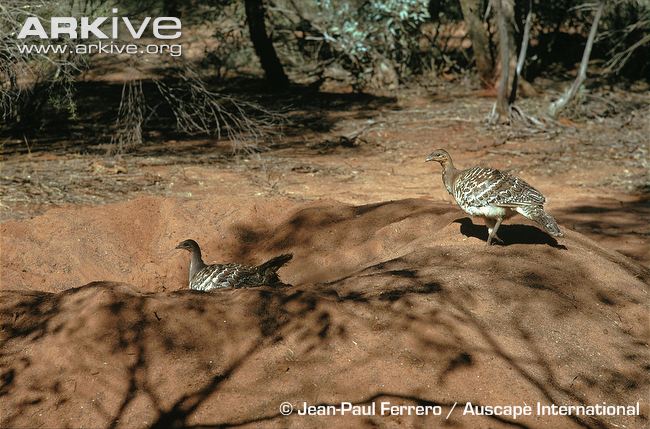 Mallee fowl on their nest mound. Mallee fowl are megapode birds and incubator-nesters – they rely upon environmental heat (not body heat) to incubate their eggs.


Incubation by body heat requires endothermy (warm-blooded) physiology, which birds demonstrate. Whether theropod dinosaurs were ectothermic (cold-blooded) or endothermic continues to be debated by palaeontologists (http://dx.doi.org/10.1666/0094-8373(2003)029<0105:DBTTOO>2.0.CO;2). Does the fact that the Javkhlant dinosaurs did not brood their eggs indicate an ectothermic metabolism? Not necessarily; as demonstrated by incubator-nesting in the megapode birds. 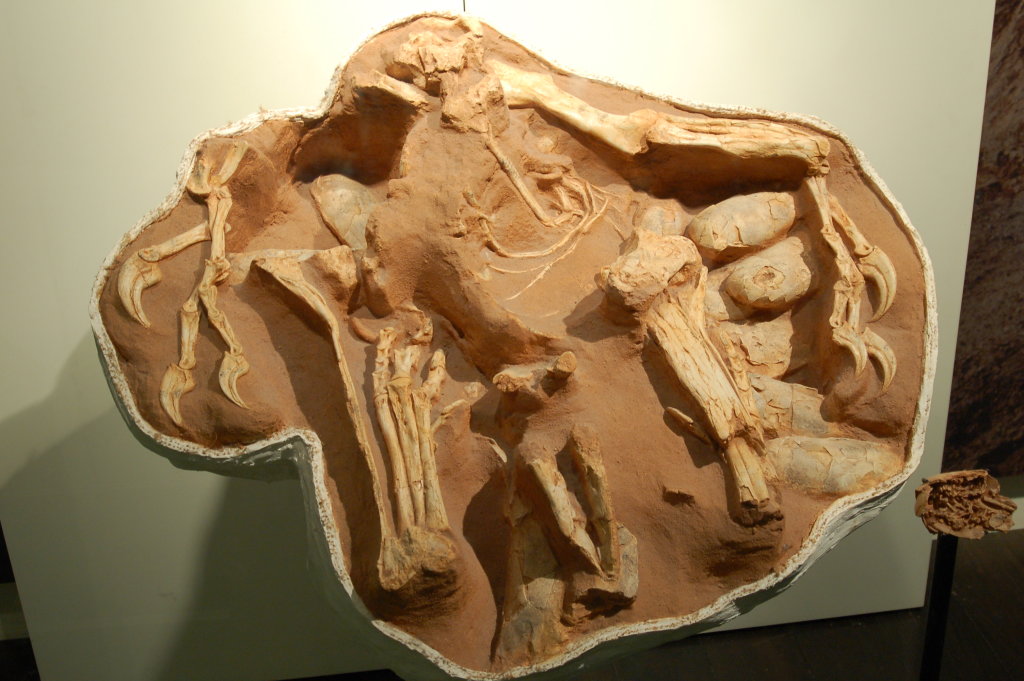 
Parental care in dinosaurs has previously been most strongly inferred from a famous fossil of an oviraptor sitting on a nest of eggs; the ‘mother’ killed and fossilised in-situ. Big Mama, also called the Gobi Desert home. However, recent Sherlock-Holmesian science suggests that Big Mama should perhaps be renamed Big Papa, with interpretation of bone morphology indicating, across theropod species, that it was the males who invested in parental care.

Male (paternal) care may have been the ancestral form of parental care, with birds evolving from theropod dinosaurs (birds are avian dinosaurs, theropods and birds are classified together as maniraptorans). In the most primitive group of living birds (Palaeognathae, including ostrich) it is usually the male birds that sit on eggs. Similarly, in megapode birds, it is the male parent who builds and occasionally attends the nest; the female usually lays the eggs and leaves. Whilst megapodes are not Palaeognathae, their breeding system is thought to resemble that of ancestral birds. 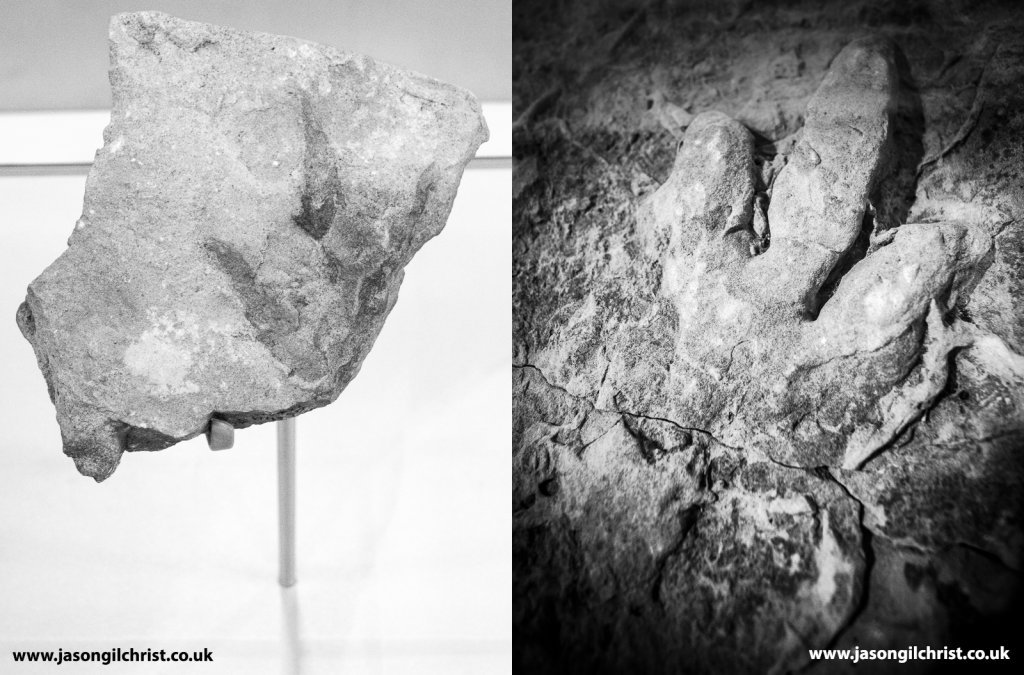 Did a family of theropods walk this way? Left: A tiny (1.78cm long) baby dinosaur footprint overlaying an adult. At the time of discovery this was the world’s smallest dinosaur footprint, and may represent a snapshot of a theropod family (Clark et al 2005). Photographed at the Hunterian Museum, Glasgow. Right: The big footprint was made by an adult theropod dinosaur~3m body length, the smaller footprint (bottom left) was made by a juvenile theropod dinosaur ~80cm body length. The full trackway shows multiple juvenile footprints apparently following the trackway of the adult (Clark et al 2005). Photographed at the T. rex in Town exhibition, Kelvin Hall, Glasgow.


Extended parental care, and family life, have also been inferred from dinosaur footprints. A dinosaur footprint trackway from the Isle of Skye, Scotland, shows what may represent a single adult and multiple ‘baby’ dinosaurs travelling together: a family of theropods. As for eggs, footprints can tell us about the behavioural ecology of animals, whether extant (alive) or extinct, dinosaurs included.

Theropods were likely not alone amongst the dinosaurs in providing parental care, and nesting communally. There is circumstantial evidence that sauropodomorphs and hadrosaurs also creched their eggs. But the conditions required to prove communality and parental care are restrictive and sites similar to Javkhlant will be exceptionally rare in their occurrence.


Care of young in the Javkhlant dinosaurs 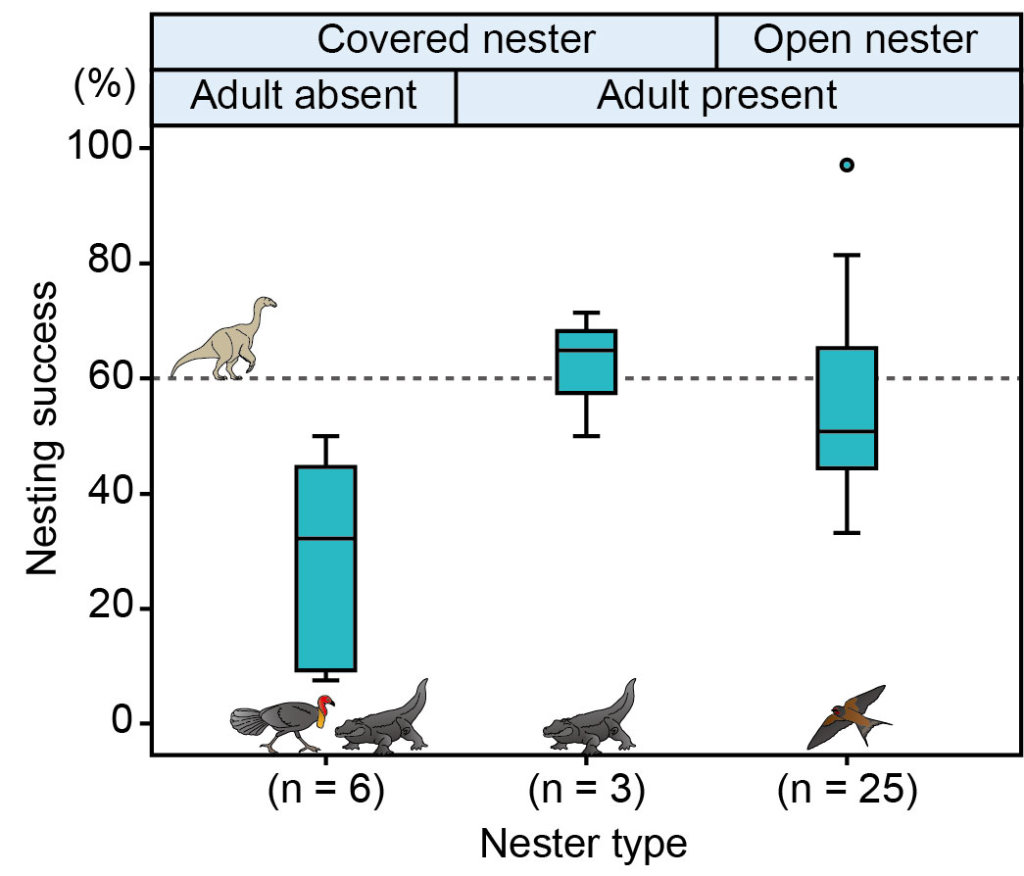 
Let’s compare the care system of the living archosaurs that display the most similar egg anatomy, the megapodes and crocodilians.

Whereas contemporary megapode bird species and some crocodilians abandon or rarely attend their nests, and experience relatively lower hatching rates (?50%) due to higher nest predation, the Javkhlant Therizinosauroids, with a hatching rate of >60%, are thought to have attended the nest and protected their eggs. But does evidence of nest attendance/protection mean the same as evidence of parental care?

The Mongolian site presents evidence of two behavioural traits present in some modern birds, namely colonial nesting and nest protection, but those two characteristics are not observed together in contemporary bird species that incubate their eggs by decomposition of organic nest material, i.e. the megapodes.

Megapodes are territorial, not colonial, and they barely engage in direct parental care. The father may attend the nest on occasion during environmental incubation of the eggs in the nest mound but is largely absent. The mother of the clutch almost never attends the nest after laying her eggs.

In addition, megapode chicks are superprecocial at hatching – completely independent of their parents and therefore receive no direct (post-hatching) parental care. So, whilst the Javkhlant data may be interpreted as inferring pre-hatching care of young (and therefore differing from megapodes in this respect), I suggest that incubator nesting may correlate with a lack of post-hatching parental care. 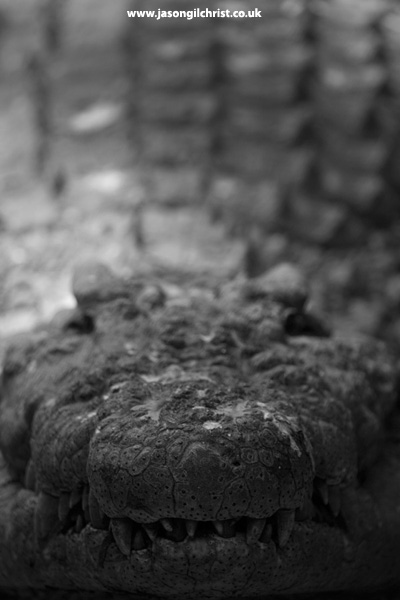 Nile crocodile, Crocodylus niloticus. Despite being an incubator-nester (burying eggs in soil and organic material), the mother protects the nest, and the hatchlings for a period.


Colonial nesting is observed in some crocodilian species, e.g. the Nile crocodile (Crocodylus niloticus), and the mother displays maternal care, protecting both the eggs and the hatchlings for a period. So, incubator-nesting in itself does not preclude direct parental care pre- or post-hatching. It is therefore possible, that whilst a parent does not have to sit on the eggs in incubator-nesting species, that does mean that a parent or parents may remain in association with the nest to protect the eggs.

A final thought. If the adult dinosaurs were not physically incubating their clutch, but were present at a communal site, I suggest that this may represent communal defence of young or communal breeding, where individuals provide alloparental care for the offspring of others. In this case, indirectly, via defence of nest sites.


Adults may have frightened or chased off would-be predators in the general area of their nest (not specifically their offspring) and may even have grouped together to deter larger predators, in much the same way that meerkats and banded mongooses team up to form a visual super-organism to chase off snakes and other predators.

The thought of the possible occurrence of alloparental care, or cooperative breeding, which is relatively rare in modern animals but more common in birds than other vertebrates, in dinosaurs is intriguing. However, the constraints of the fossil record mean that it will be very difficult to detect direct evidence of its occurrence. 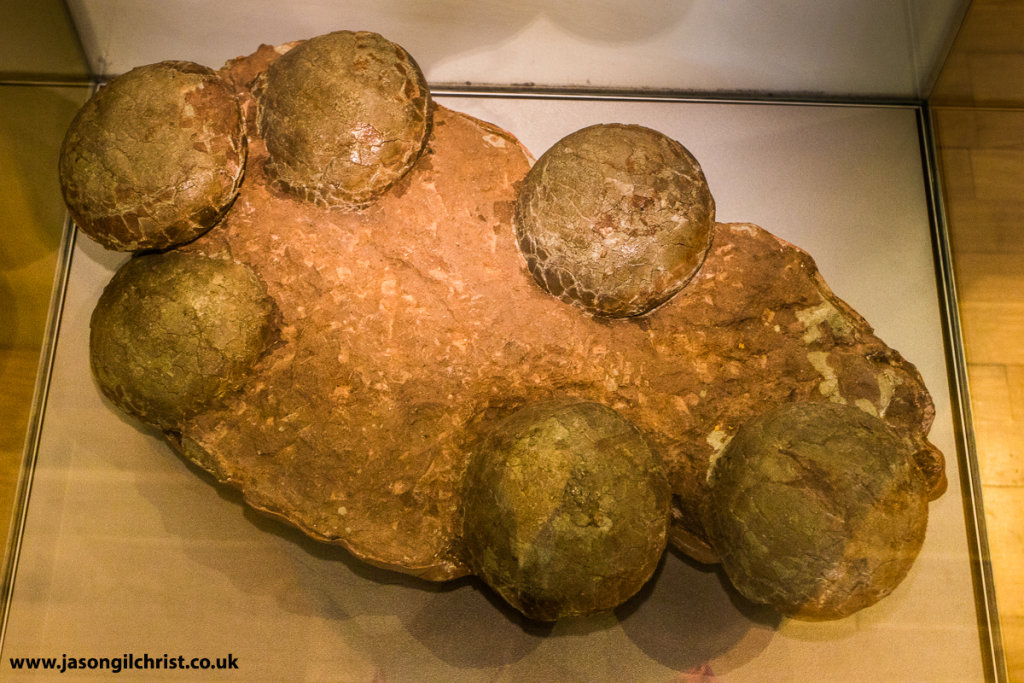 One thing is clear. Palaeontologists can learn a lot, about the behavioural ecology, lives and deaths of dinosaurs, not only from bones and teeth, but simply from fossil eggs. The research of Tanaka et al 2019 helps us to paint a picture of life in the Age of the Dinosaurs, a life full dynamism, where with some detective work, we can re-imagine a world not so different from the one that we live in today.

Sir David Attenborough referred to bird’s eggs as “the most perfect thing in the Universe”. I wonder what he would say about dinosaur eggs and the window of opportunity they provide into understanding the behavioural ecology of long-extinct dinosaurs?

Lead image (click on Blog to view if you cannot see) Communal nesting in Therizinosauroid dinosaurs. Art by me using MSPaint inspired by the really good palaeoart of Masato Hattor (see Ancient Mongolian nests show that dinosaurs protected their eggs).