The Death of a Rhino

Last week saw the death of a geriatric captive rhino in San Diego Zoo. It does not sound like a big deal. She was an old rhino. She was past breeding age. Yet, the news received a large press response and I contributed an article, Only a Jurassic Park-style intervention can now save the northern white rhino, to The Conversation prompted by the event. So, why the big deal?

The importance of Nola’s death is unclear, and may forever remain so. Firstly, the northern white rhino may be resurrected by Jurassic Park-style technology (but I doubt it). That would require as yet unproven (on rhino) techniques, and the eggs of the remaining two females, and ideally the surviving male, when they die, to be fertile (when the animals have failed to breed themselves and are only getting older). Stored DNA from those northern white rhino that died in recent years will then be combined with the similarly-frozen eggs and sperm, and the embryos produced implanted within surrogate female southern white rhino. If this science-fiction plan plays out, the first northern white rhino calf would be produced after the death of the remaining northern white rhino. We are therefore talking, not about saving a subspecies from extinction, but about de-extinction (resurrecting an extinct species); a much more challenging proposition.

In the world in which we live, we have to be pragmatic, and economic with the resources available to conserve wild animals. Can we justify spending at least half a million pounds (US$750,000) to try to bring back to life a subspecies from the limited genetic material available within the 13 or so individuals for which there is DNA stored? Genetic diversity is known to be extremely limited within the population sampled and, even if the animals were all alive and breeding, there would be fears of a genetic founder effect through inbreeding depression.

As a near-extinct subspecies, the conservation argument for continued investment to save the population is based upon whatever adaptive genetic diversity it holds that differentiates it from the other subspecies. But the level of adaptive genetic differentiation is unknown, and what genetic diversity, and useful alleles not present in the southern white rhino, remain in the thirteen animals sampled is not clear.

To be direct, if we can raise half a million pounds to try to resurrect the northern white rhino, should we not instead invest those funds in protecting the surviving southern white rhino? Or alternatively, direct the money toward the other rhino species, in particular the Asian species, that are at low but rescue-able living population sizes.

Add the news that South Africa last week legalised internal trade in rhino horn, South African judge lifts domestic ban on rhino horn trade, at best a highly controversial move (regarding its implications for the future of the white rhino), and it is difficult to be positive about our ability to manage these incredible animals to survival. We have already failed the northern white rhino, let us ensure that we do not let down the remaining rhinoceros species. 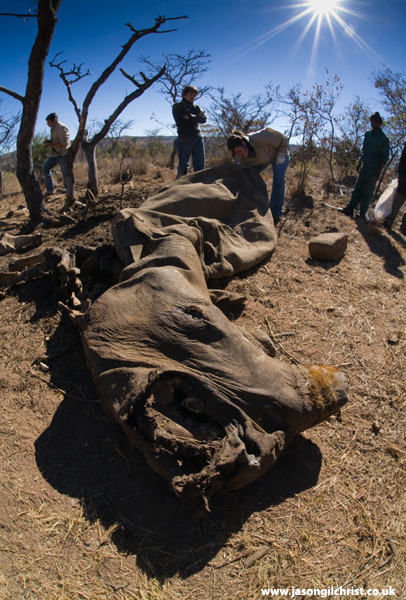 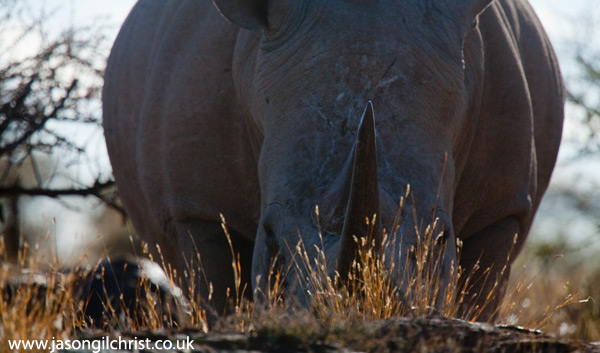 There are few experiences to rival being close to the massive bulk that is a wild white rhino in the veld. This is a southern white rhino. Sadly we are unlikely to ever experience this with northern white rhino again; thanks to historical poaching and the failure of conservation.

The header image, silhouette of a southern white rhino (click Blog if you cannot see it) was published in online article Only a Jurassic Park-style intervention can now save the northern white rhino.

To view my rhino articles, and learn more from other resources referred to above, click on the links below.

Videos of rhino capture and processing, and photos, available in my Rhino! gallery

The Sixth Rhino: A Taxonomic Re-Assessment of the Critically Endangered Northern White Rhinoceros

Save the Rhino population figures