The Return of the Giant Corpse Flower… 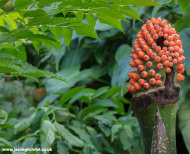 Back in July 2015 one of my early Blogs, Amorphophallus titanum: A Natural Wonder, was focused on a plant. A very special plant, or more specifically, a flower. A flower? It was the largest flower (or technically, spadix) I have ever seen, at 267cm high, much taller than myself, and the largest inflourescence amongst all the plants. The scientific name of the plant in question is Amorphophallus titanum, which translates as giant misshapen male penis. But size alone is not why I and busloads of visitors flocked to the Royal Botanic Garden Edinburgh (RBGE) to visit it. We also visited for the smell. The plant’s native Indonesian name, buna bangkai, means corpse flower, so-called because of the unpleasant smell that it exudes at its peak of fertility (ripe for pollination). The impressive giant flower, and smell of rotting meat, are to attract pollinating insects, in particular carrion beetles and sweat bees. Rather than being attracted to sweet smelling fragrances with the promise of sugary nectar, some insects are attracted by the (false) promise of something dead to feast upon (a strategy called Batesian mimicry – the plant cheats to attract pollinators).

Sadly, fertilisation (at the RBGE via human intervention rather than insects seeking corpses) was unsuccessful. New Reekie (the nickname of the RBGE plant) failed to fruit following its spectacular flowering.

The reason that I and over 19,000 many others were flocking and queuing around the block to spend some time in the company of titan arum, as the species is also known, is the rarity of flowering. The 2015 flowering was the first ever flower in Scotland. The RBGE plant had been tended for 12 years prior to its’ first flowering. Flowering doesn’t happen very often. I wondered if I would have the opportunity to see (or smell) it again.

Imagine then, my surprise and frustration, when I recently discovered that New Reekie (the nickname of the RBGE plant) not only has its own Twitter account (@TitanArumRBGE; clever plant!) but that it had flowered again earlier this year [the first week of August]. And I had missed it…

I recovered from my disappointment, to quickly pack my camera in my rucksack, and get down to the RBGE to visit the plant (‘New Reekie 2’) post-flower. It was fruiting.

OK, a fruiting Amorphophallus titanum is not as spectacular a sight (or smell) as in flower. But this time I had lots of time to enjoy New Reekie’s company (and to enable my camera lenses to de-mist). The fruit spike was club-like rising from the soil with a new secondary leaf spike growing from its’ base. The head of the spike, pineapple sized and shaped, contained numerous (well over 100) individual bright orange swollen grape-sized fruits that had developed from the female flowers.

Whilst there were many other distractions (weird and wonderful plants and some colourful flowers) amongst the RBGE Glasshouses, that I also explored, I still found myself returning to the colourfully swollen fruit spike of New Reekie 2. Amongst numerous Glasshouses representing exotic climates, habitats, and plant species [temperate, tropical, arid, montane, lowland, rainforest] with a diversity of morphologies, titan arum remains a highlight for its weird and wonderful lifecycle.

Below: series of images of New Reekie 2, Amorphophallus titanum. Click on an image to read more about it. 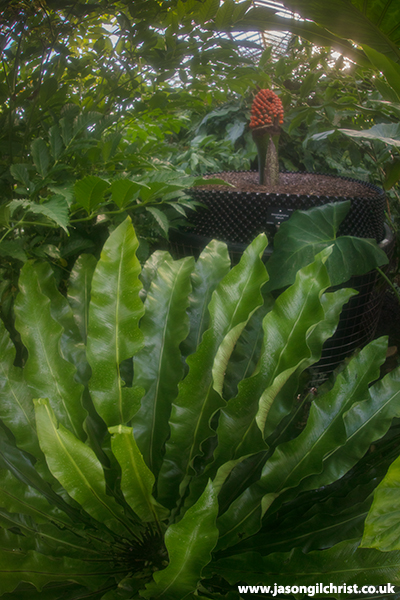 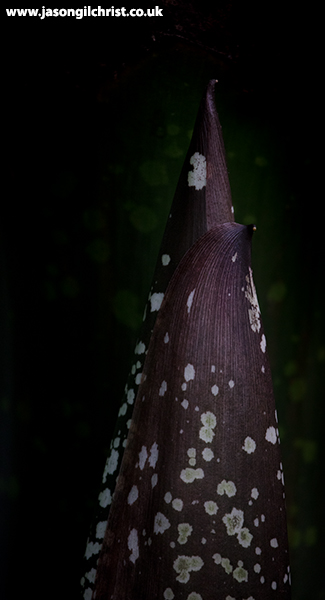 The lead image (click Blog and scroll down if you cannot see it) shows the fruit head of Amorphophallus titanum amongst the surrounding vegetation of the Glasshouse at RBGE.

PS – New Reekie is a play on the nickname of Edinburgh, Auld Reekie, which was derived from poor sanitation and smoke in the Old Town of Edinburgh in the 18th Century.