The giant pterosaur that pterrorised skies over Skye 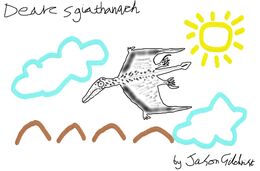 A new giant pterosaur has taken to the skies. Discovered in 2017, described in 2022, Dearc sgiathanach, pronounced “Jark ski-an-ach”, which translates from Scot-Gaelic as ‘winged-reptile’, is the largest pterosaur known from the Jurassic period, with a wingspan of over 2.5m. And it was only a juvenile, still growing, and so the adult would have been even larger at maturity…

The giant flying reptile was discovered on the Isle of Skye, on the west of Scotland, and described by a team at the University of Edinburgh, with Natalia Jagielska as lead author, in the palaeontology research group led by Professor Steve Brusatte. OK, it’s a Scottish fossil, and of global importance, in recalibrating our understanding of the first vertebrates to evolve powered flight [it was previously thought that such large body size only evolved in pterosaurs later in the Cretaceous, ‘shortly’ (in geological terms), before they all died in the mass extinction event about 66 million years ago that also wiped out the dinosaurs. But why am I so interested in it? 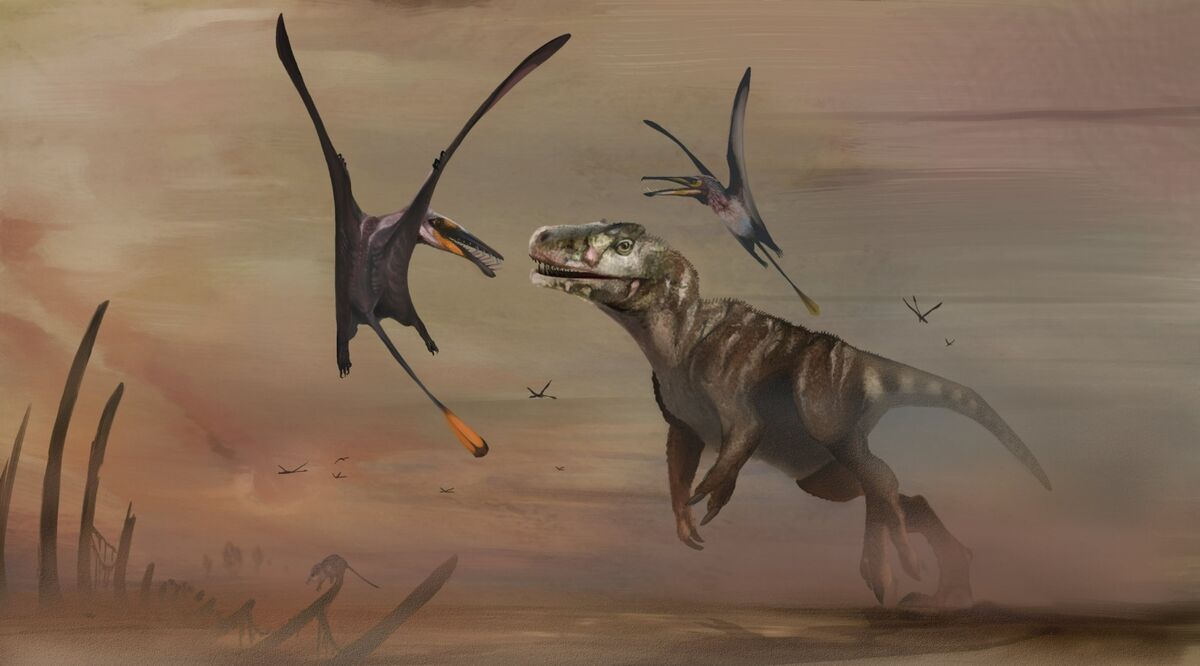 
I am an ecologist, I study the behavioural ecology of extant (living) creatures, including mongooses, mouse lemurs, chimpanzees, and social spiders. But I am also interested in physiology and anatomy, and how these contribute to the ecological niche that a species occupies: basically where and how it lives its’ life, and interacts with the environment and other species that surround it.

Palaeontologists don’t just study dead rocks (like geologists do), they also look to living organisms to understand the habitats, animals and ecology of extinct species and ecosystems. As an ecologist, I like to look at, and learn about fossils, in order to re-imagine lost worlds, and the creatures that lived in them. In doing so, we can gain understanding of how the world has changed, and stayed the same, and better appreciate the diversity and amazingness of the natural world, in the context of deep time, with life on Earth thought to have been ‘born’ at least 3.5 billion years ago.

So, the Dearc fossil matters to me. Firstly, mid-Jurassic vertebrate material is globally rare. Secondly, even though Scotland has a relatively good share of rocks of that age, such finds are rare, even here, as well. Thirdly, articulated fossils (where there are bones preserved together, as in life, rather than single or scattered) are super-rare. Finally, nearly intact specimens are super-super-rare. Dearc ticks all those boxes, and more. Pterosaurs, by nature of their adaptations to a flying lifestyle, had thin, lightweight, fragile bones. So pterosaurs, and relatively intact complete pterosaurs, are super-super-super rare. And this one is from Scotland, my home, where few pterosaur remains have been discovered. 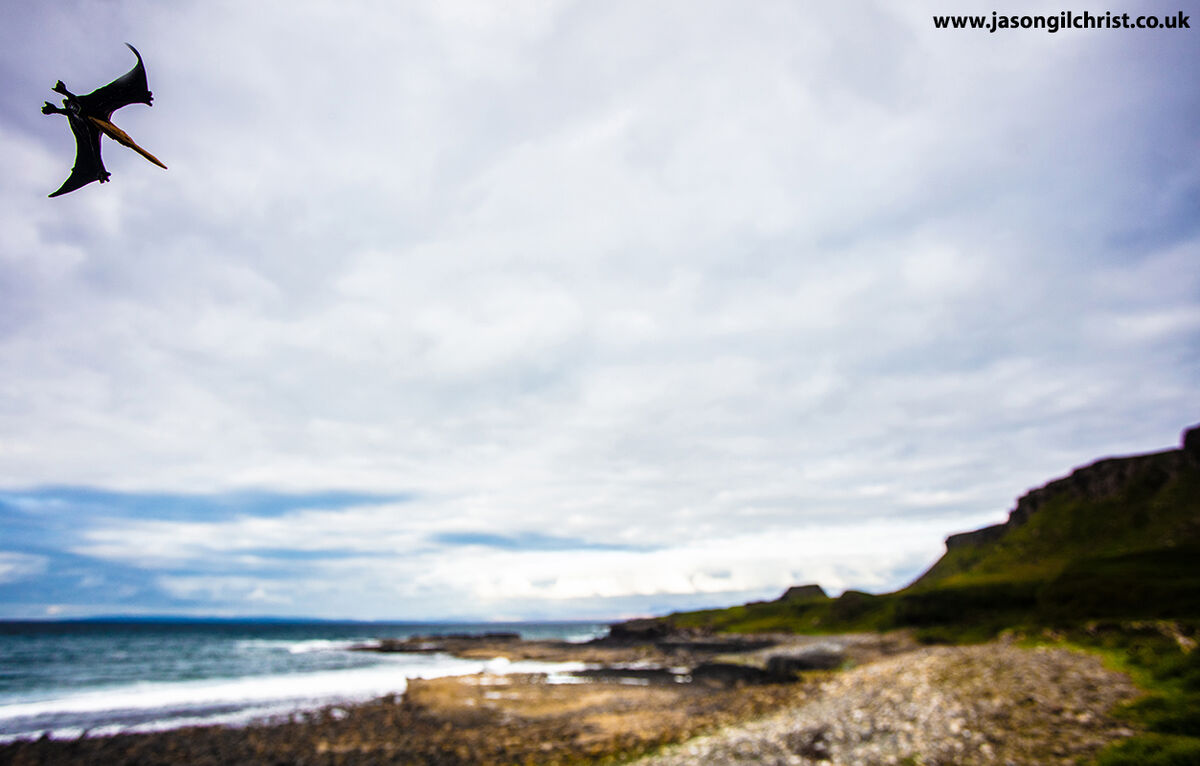 
I have visited the Isle of Skye a number of times in my life. But my last couple of visits have specifically focussed on paying homage to the weather-beaten island’s vertebrate fossil sites. One of my favourite locations is Rubha nam Brathairean, Brothers’ Point, a landscape that represents an exercise in time travel. At low tide, in amongst seaweed, limpets and barnacles, lie footprints. Dinosaur footprints, made by dinosaurs clomping about around 175 million years ago. Such footprints, with an understanding of biomechanics pioneered by the late Professor R. McNeill-Alexander, enable us to re-imagine the size, gait, speed and behaviour of the giant beasts as they made the footprints. Alongside footprints of theropods, sauropods, and saurischians, a theropod tooth has been excavated. And from the same time period, now, Dearc…

The Dearc paper describes the morphology (anatomy) of the new discovery, and in doing so, introduces us, not only to a new species, but to a new genus, so different is this specimen from already known pterosaurs. The scientists place the new taxon within its evolutionary tree, as a Rhamphorhynchine (Rhamphorhynchus) pterosaur. That’s a non-pterodactyl-type pterosaur, differing in skull morphology and other bits and pieces of skeletal anatomy. 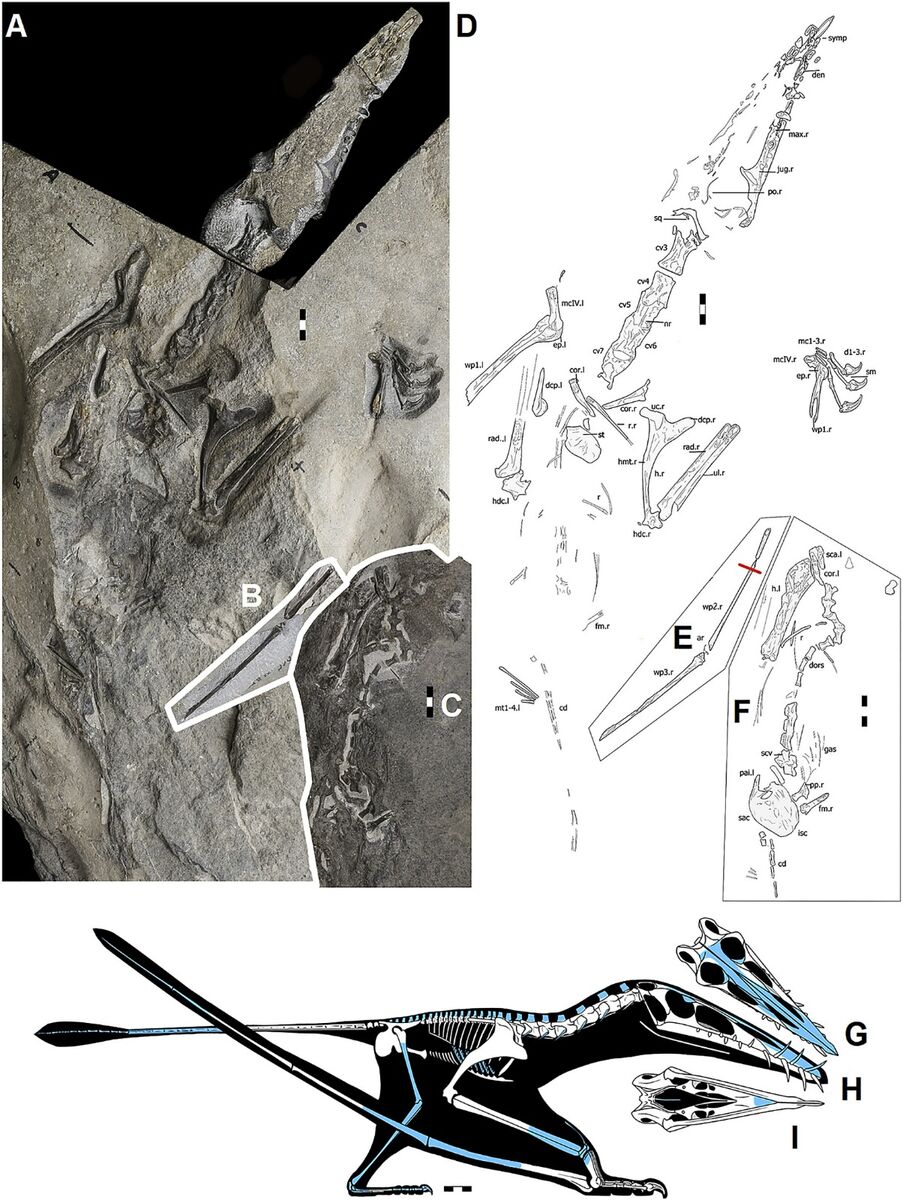 Dearc sgiathanach - Postcranial skeleton and dentition of the new Middle Jurassic pterosaur. Figure 3 from Jagielska et al 2022, A skeleton from the Middle Jurassic of Scotland illuminates an earlier origin of large pterosaurs.


OK, but can we extrapolate beyond the skeleton, to what the animal looked like in life, and how it behaved? Enough is known about soft tissues, muscle and integument, and biomechanics, in living vertebrates, to virtually reconstruct the life-appearance of Dearc sgiathanach. With this, we can start to envisage its life.

It was big. It had a massive wingspan, which is in the range of the Top 10 Birds for largest wingspan. So, it could fly/glide. With a long tail. It had a robust elongated skull, with recurved forward outward projecting fangs towards the nose, and conical peg-like teeth towards the rear of the skull. Diet is not considered in the paper, but such dentition is associated with a piscivorous (fish-based) diet in pterosaurs, and other extinct giant reptiles, e.g. plesiosaurs. The optic lobes were the largest yet described for a basal pterosaur, so Dearc had excellent eyesight, and we can therefore infer that it hunted by sight, scooping up its prey in its jaws, perhaps spearing unfortunate fish with its fangs. The claws of its forelimbs also look capable of inflicting serious damage on something… 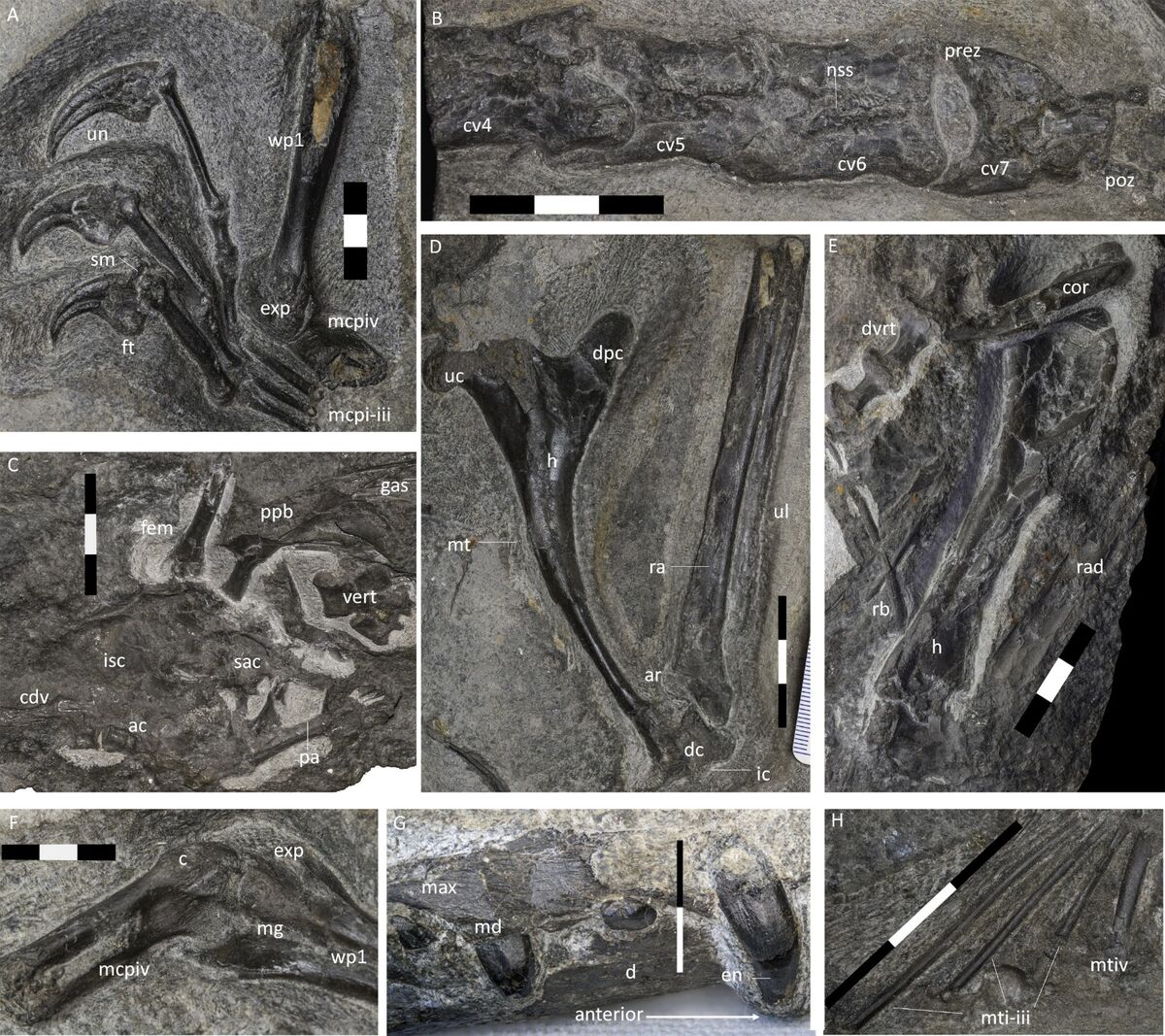 Dearc sgiathanach - Postcranial skeleton and dentition of the new Middle Jurassic pterosaur. Figure 3 from Jagielska et al 2022. In particular, see the claws on forearm (A), and teeth in jaw (G).


When the news of Dearc broke, it was in a week that I was teaching Animal Behaviour at Edinburgh Napier University. We happened to be considering Migration and Orientation, and Play in animals. It got me thinking: did pterosaurs migrate, did they play? Finding the answer to those questions in fossils is not easy, and for play maybe impossible, but the closest living relatives of pterosaurs, which are crocodiles and birds, both contain species that engage in migration, and play. So, the vision of pterosaurs travelling long-distances, and cavorting with objects or each other, is a tantalising and not unrealistic one. In short, we can infer the behavioural ecology, in life, of long-dead creatures, from their preserved remains and by looking at and comparing with living (extant) organisms. A particularly good example of this, that I previously wrote about, infers communality and care of young within therizinosaur dinosaurs in Mongolia from their fossil nests.

Dearc is big. That is interesting, not only in itself, thinking of biomechanics, anatomy and physiology, and the costs and benefits of large body size, particularly for a flying animal, but also as viewed through an evolutionary perspective. Before this paper, pterosaurs were thought to have evolved large body size much later in their history, and due to competition with birds which evolved from the dinosaurs [pterosaurs, by the way, are not dinosaurs, having split from reptile ancestors beforehand]. That pterosaurs were bigger earlier means something else encouraged the evolution of large size: but what?

Allow me to speculate: the explanation has to come from ecological niche space and partitioning. Pterosaurs evolved to get big because of competition from within (from other pterosaurs) – getting bigger enabled those larger species to occupy ecological space, likely diet, that was not well-covered by other (pre-existing) species. Tyrannosaurus rex, the largest ever land predator, is thought to have evolved large body size for similar reasons. To evolve to be bigger, and fill that nice space, you need to have food to fuel your metabolism at that larger size, and it is therefore likely necessary that there were large fish to predate upon, with the fish themselves potentially having evolved large size through coevolutionary warfare with predators, pterosaurs included.

We understand contemporary ecosystems through the lens of evolution, as evidenced over evolutionary time by the fossil record. The increase in average body size of a lineage over time is known as Cope’s Rule. Dearc may well represent this evolutionary game in action, only much earlier, and via within-taxon competition. 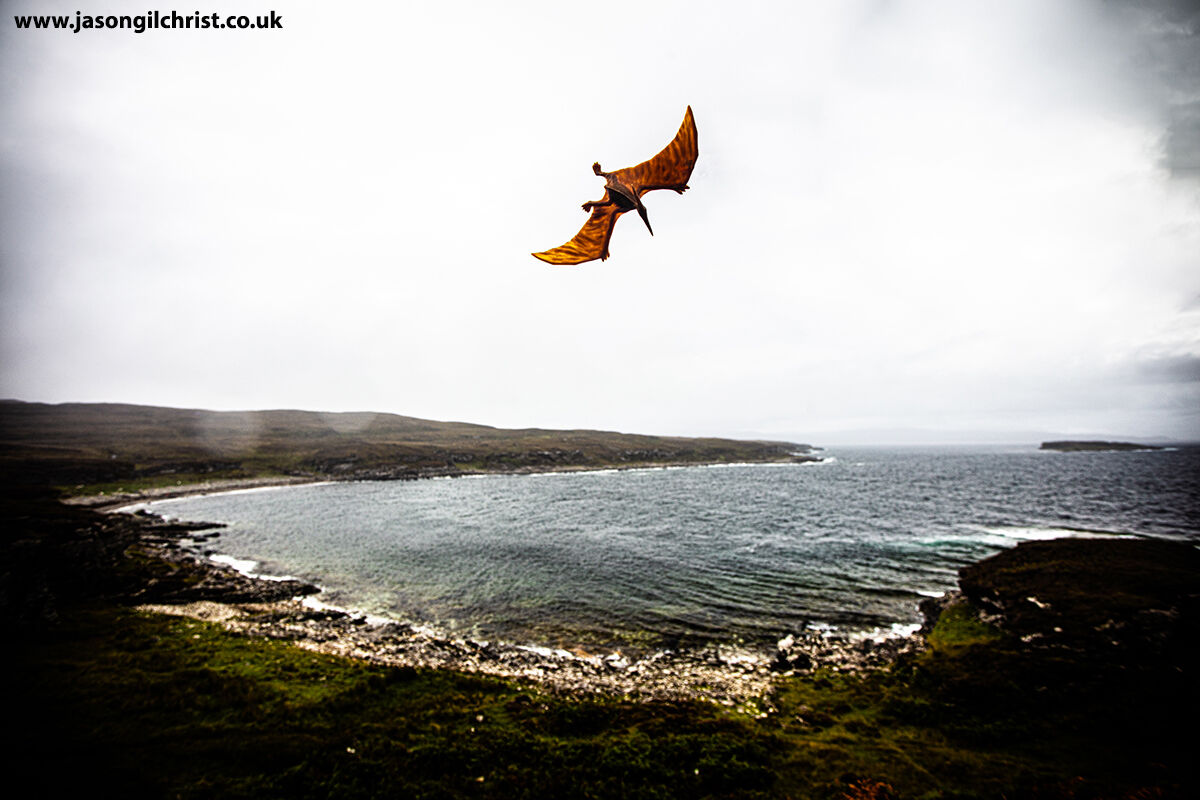 
For me, Dearc is fascinating: we can re-imagine this long-extinct animal in two contexts. One, this was an individual. A living, breathing pterosaur, that died. Resulting circumstances lead us to read its story, from the evidence remaining, 170 million years later. But it was also a member of its population and species. So, its’ story reflects on an entire taxonomic group of individual pterosaurs that played a role in an ecosystem. Not just of other species of pterosaur (another pterosaur has recently been described, from elsewhere on the Isle of Skye), but of a whole community of animals, plants and other organisms that functioned and interacted. Not fundamentally differently from the way in which ecosystems do today.

There is more to come, from Dearc, and other bits of Scottish pterosaurs… But, oh, what a world to re-imagine. The Jurassic World of Skye, with its’ giant dinosaurs roaming the land, giant marine reptiles (plesiosaurs, ichthyosaurs, and mosasaurs) patrolling its’ waters, and now giant pterosaurs soaring in the skies.

Gilchrist, JS., 2019. Tyrannosaurus rex and the dinosaur teeth of Skye: Windows into the lives of dead dinos. Blog. 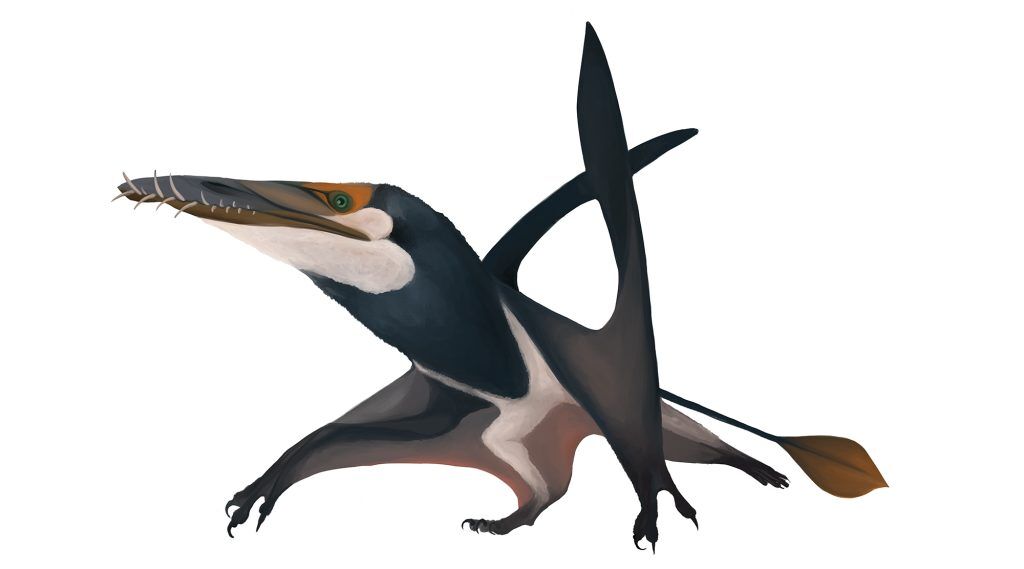 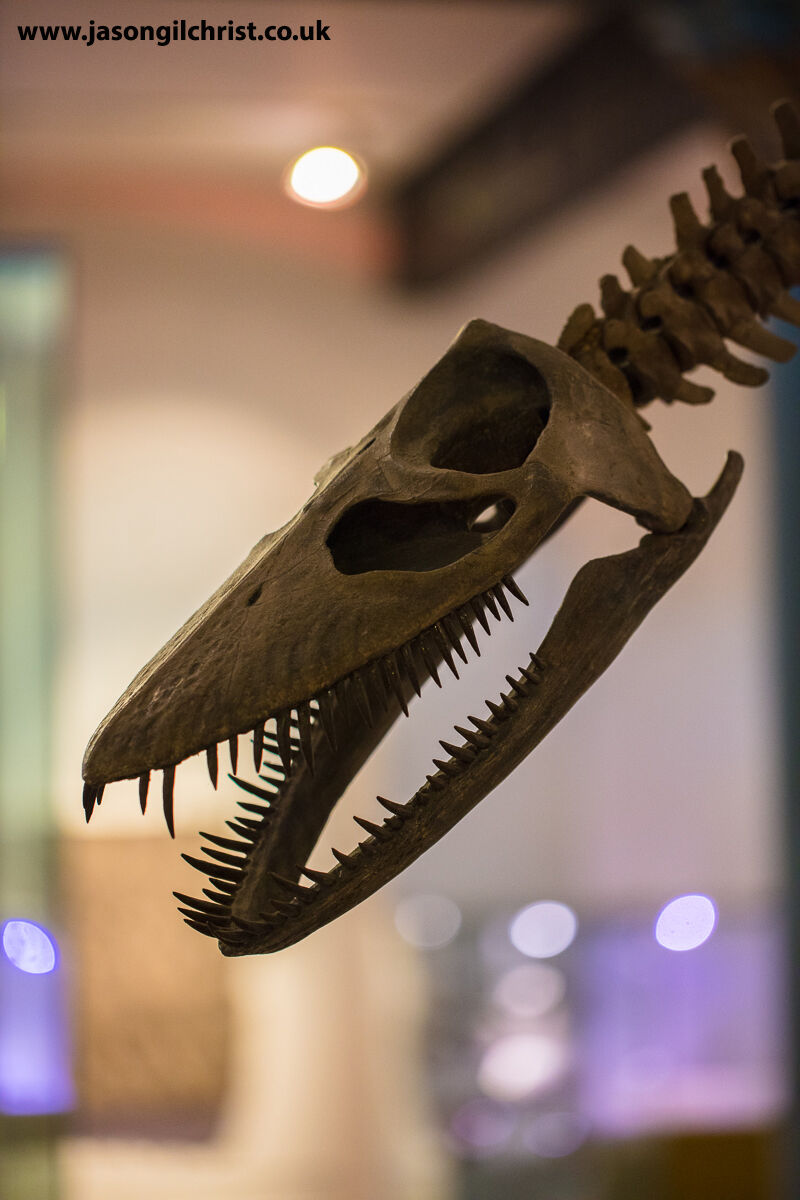 Fossil skull of plesiosaur (Apractocleidus teretipes/Cryptoclidus eurymerus) at The Hunterian Museum, Glasgow, Scotland. Look at the teeth. Plesiosaurs were piscivorous - fish eaters, with molluscs (including cephalopods) also likely contributing to their diet. Compare the dentition with Dearc sgiathanach. 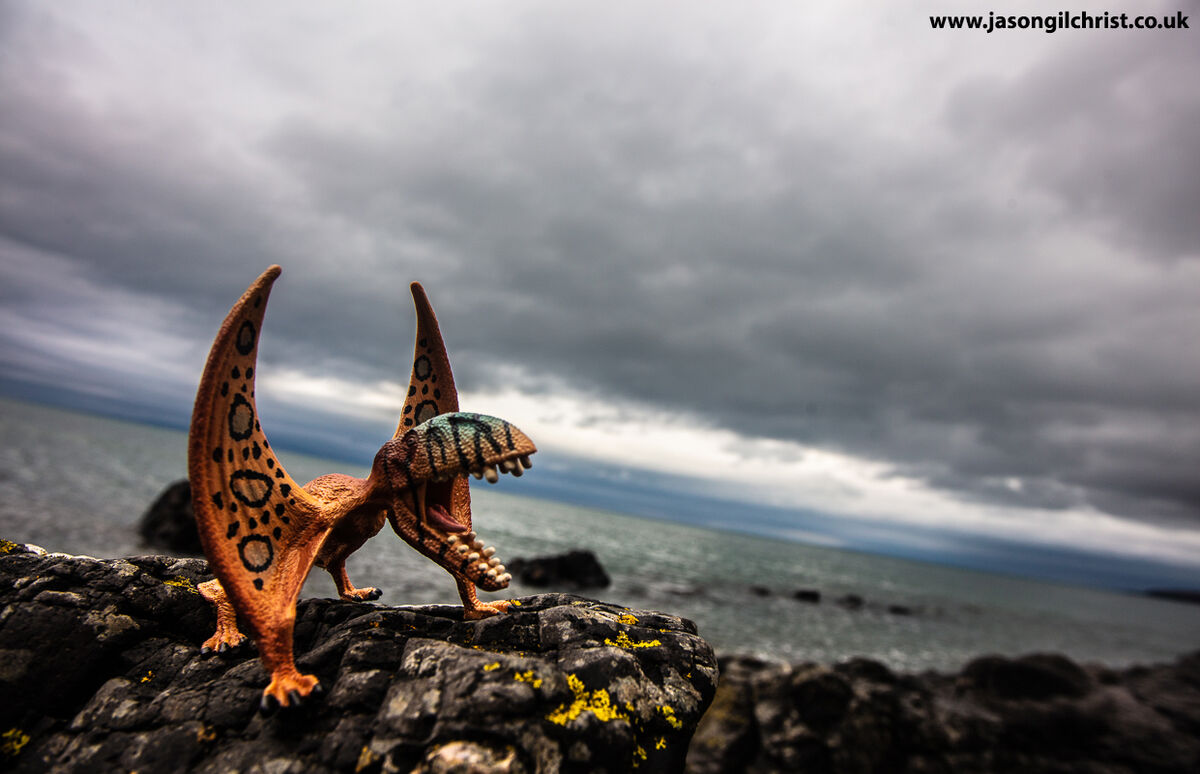 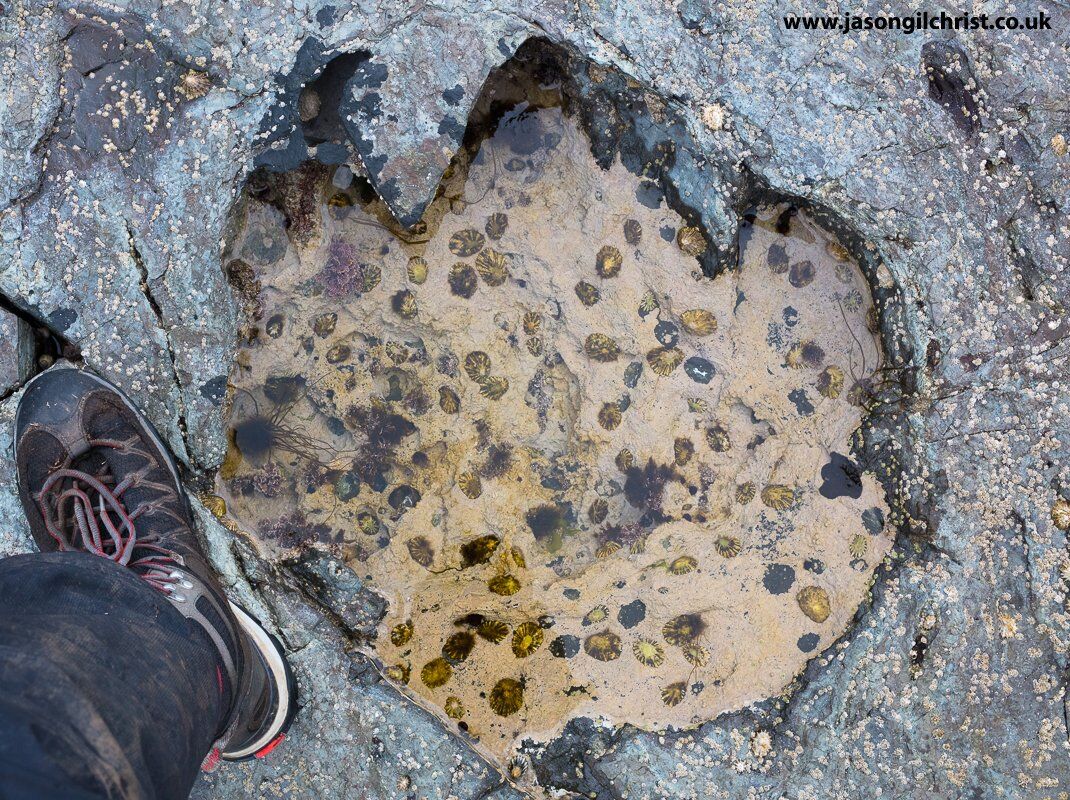 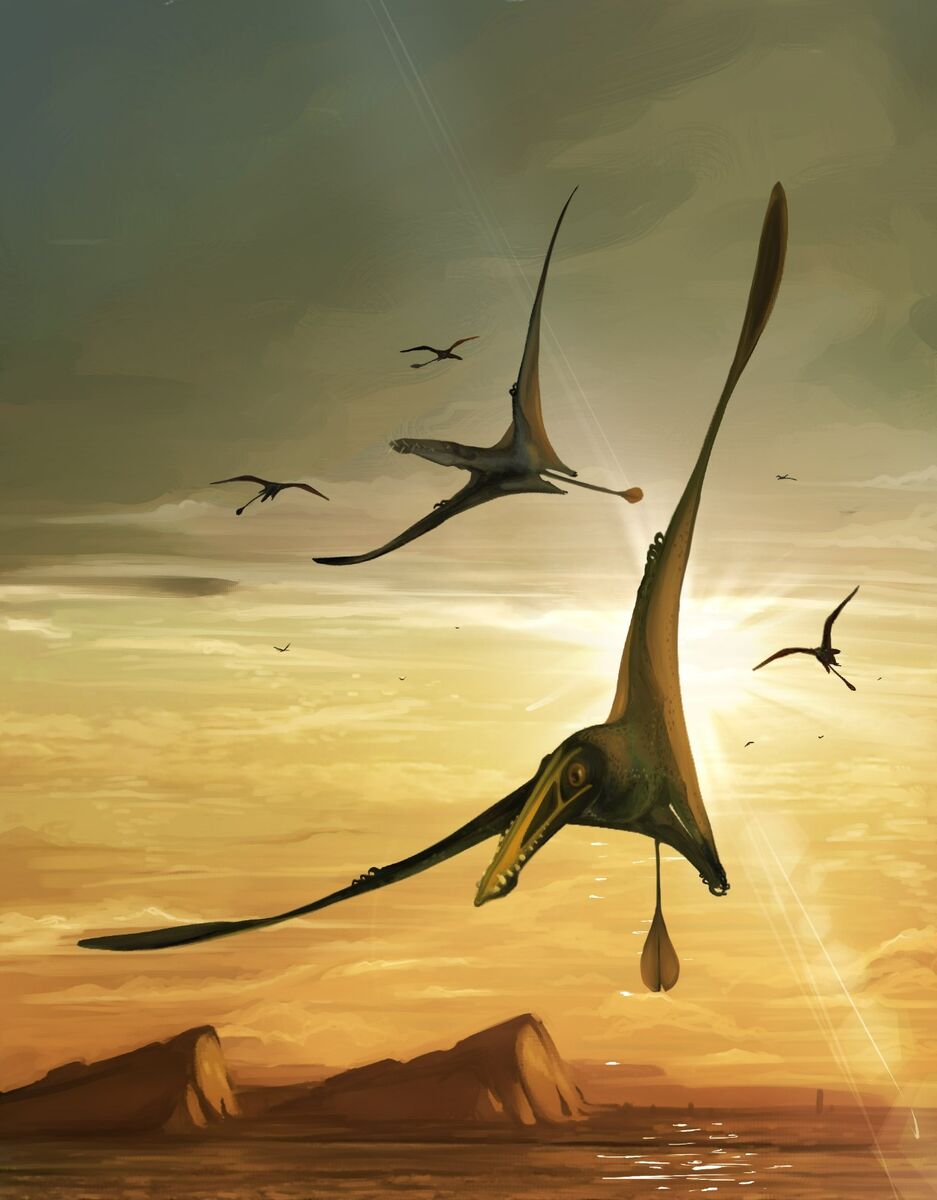 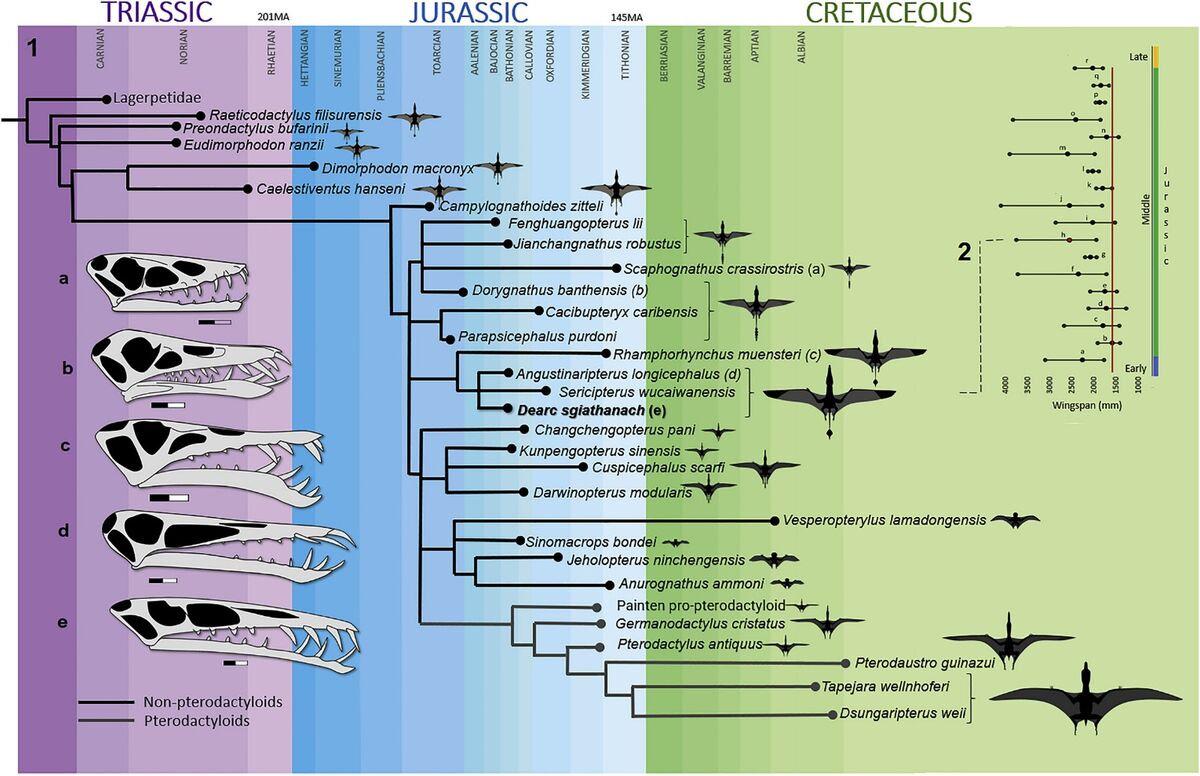 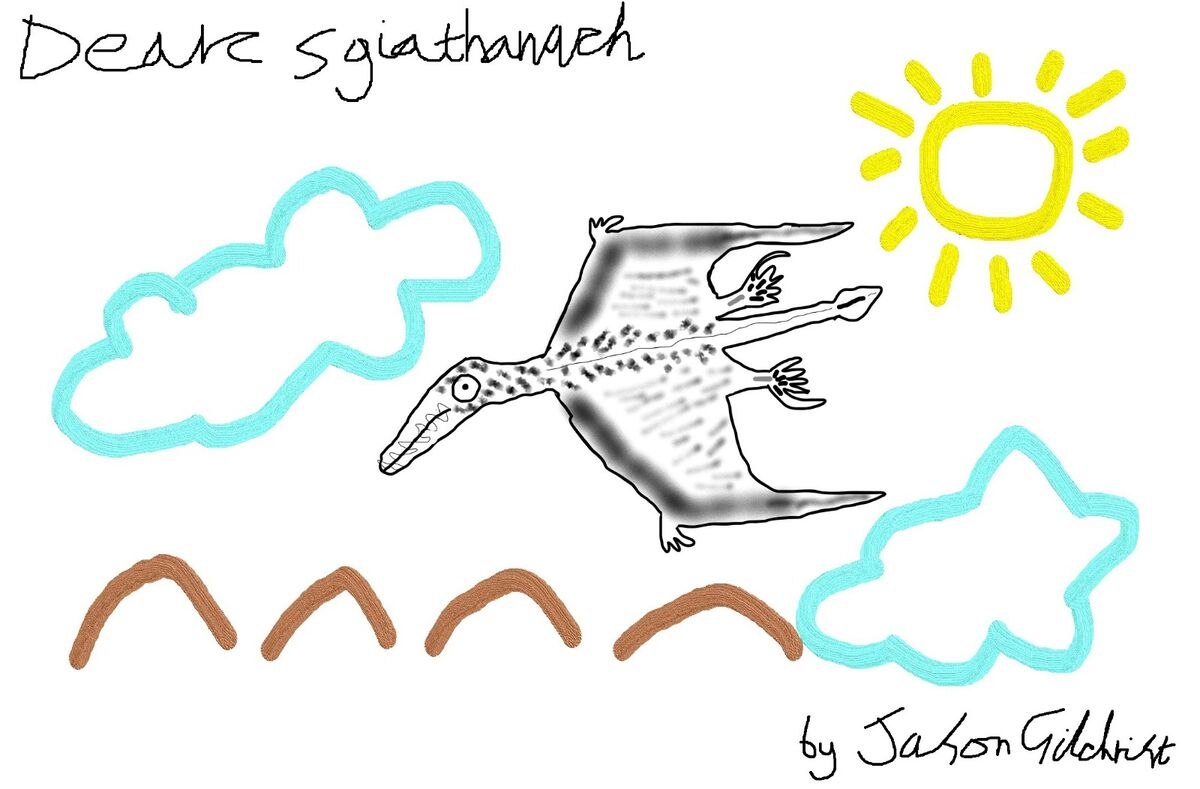