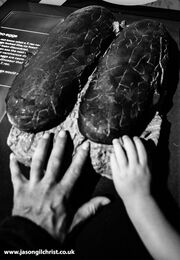 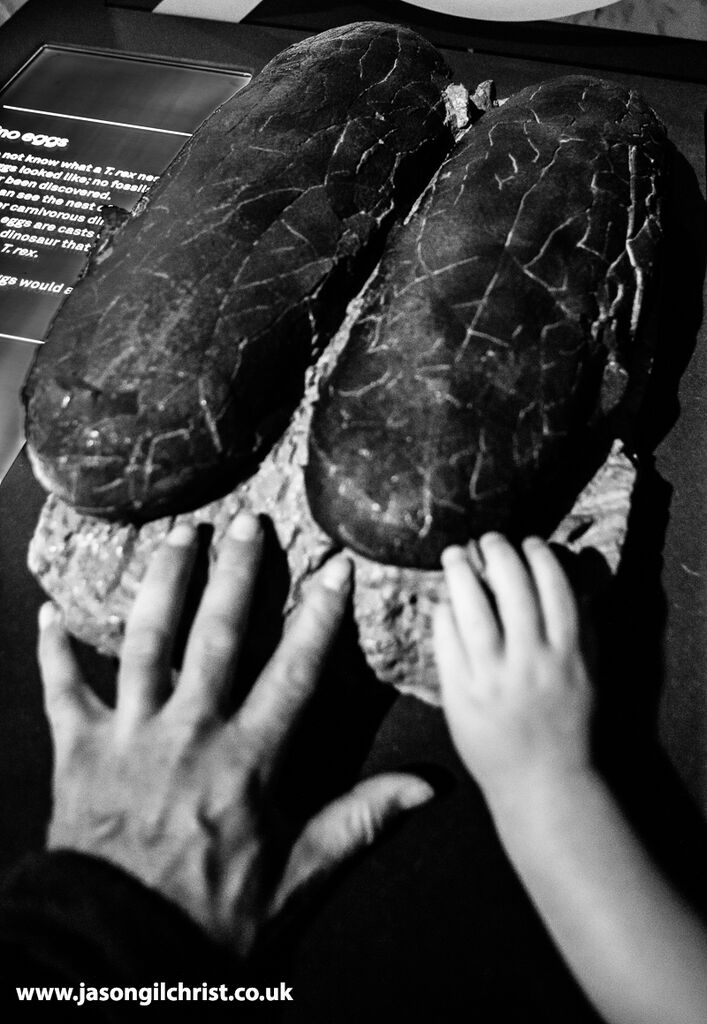 A reimagining of Tyrannosaurus rex eggs (model). No T. rex dinosaur eggs have ever been identified. At the T. rex in Town exhibition, Kelvin Hall, Glasgow, Scotland. My hand (and a random youngsters) for scale.


There is an egg. Its big. By our standards. About 43 cm long. There is a bunch of them. They are elongate in shape. And their shells are soft-shelled, a little rubbery, like turtle eggs. The off-white surface of one of the eggs appears to flex. And again. Back and forth. After a time, a scaley wet nose, about 5 cm long, bursts out through the side of the egg. The nose pauses, as if resting from the efforts of breaking through the leathery eggshell. Or maybe it is savouring its’ first taste of fresh air, and breathing through the nostrils at the end of its snout? As the hatchling rests, another egg shows signs of movement, and another. And soon, there are a series of reptilian rostra poking out of their early life capsules.

A baby Tyrannosaurus rex. Is this what a hatchling tyrannosaur would have looked like? Source: AtomicMutant's Kongy Grab Bag.


Then a head appears, and slowly, somewhat awkwardly, a body clambers, then stumbles, out of the eggshell, limbs snagging in split flap-like remains of the eggshell. The creature that exits this egg is a reptile, no doubt about it. It stands, wet and fresh-from-egg, its scaley skin glints in the sunlight. It turns its head back and forth, surveying the landscape around it, blinking, as other hatchlings extract themselves from their eggshells. Soon there are tens of babies eyeing up the world around them. They don’t appear to know what to do next. As some of them look to explore their surroundings, they stumble, as they learn how their legs work. They only have two legs, and two gangly but short two-clawed arms. Their skulls are the size of a rabbit skull, and their bodies are about the length of a German Shepherd dog. These are dinosaurs. And no ordinary dinosaurs. These are tyrannosaurs!

Newly described baby tyrannosaur specimens, UALVP 59599 and MOR 268, alongside an adult Albertosaurus (tyrannosaur) and the palaeontologist who recently described the specimens, lead researcher Dr. Greg Funston. UALVP 59599 is represented by a toe claw (shown in yellow). MOR 268 is represented by a jawbone (shown in blue). Image provided by Greg Funston.


The first ever ‘baby’ tyrannosaur fossils have now been described. At a recent conference of the Society for Vertebrate Paleontology (SVP), Dr. Gregory Funston presented a re-imagining of these dinosaur babies. Based on a 3cm jawbone, and a claw, it is estimated that, at hatching, these young tyrannosaurs (not Tyrannosaurus rex, but an earlier species) had a 9 cm skull, and were approximately a tenth the length of an adult, which is relatively small, even at a body length of 76 cm to 1 m [2.5 to 3 feet], compared to a 9-meter [30 foot] adult. 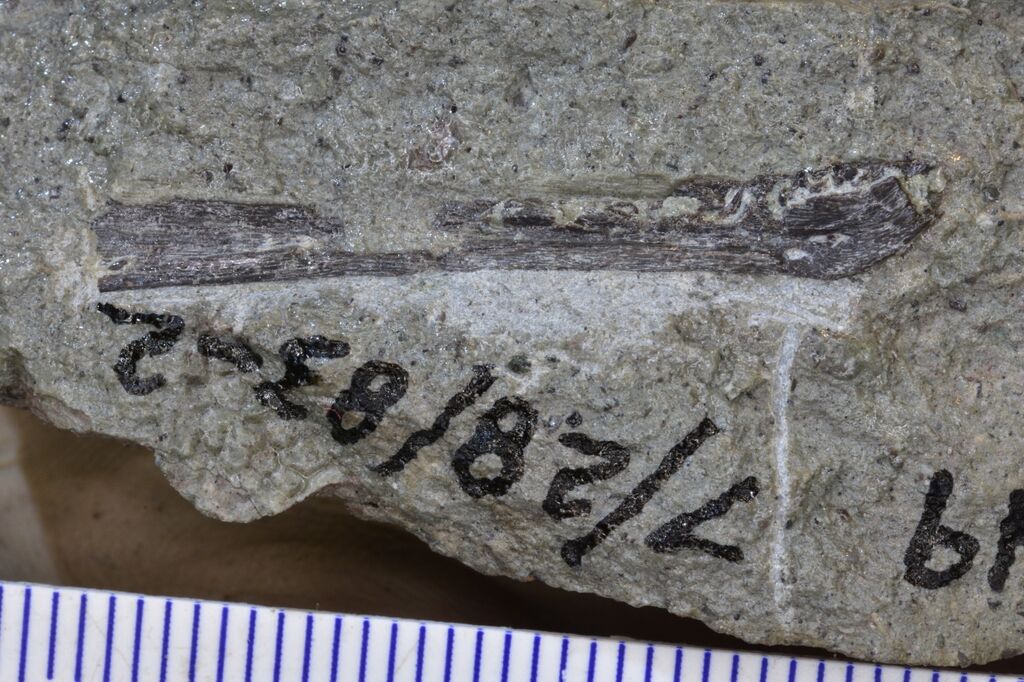 
As yet, no tyrannosaur eggs have been identified, and this may be due to tyrannosaurs, like some other dinosaurs, laying soft-shelled eggs. We don’t know. Nevertheless, based on the size of the hatchling material, the palaeontologists who studied the fossils estimated the size of the eggs from which they hatched.

Both of the embryonic bones were found at localities with the embryonic remains of other dinosaur species. According to Dr. Funston, this “gives us a good clue that tyrannosaurs were nesting in the same areas” as other dinosaur species. It makes sense that predatory dinosaurs would breed in the vicinity of a readily available food supply and likely at the same time (seasonally) as its prey species…


Left to their own devices, these tyrannosaur hatchlings, with their tiny blade-like teeth, would likely have been feeding on insects and small lizards. A far cry from the mega-monster carnivores that they would, all going well, grow to be. Ultimately, striking fear into the hearts and minds of even the largest herbivorous dinosaurs of the time.

But were the hatchlings left to their own devices? Were baby tyrannosaurs running off to grab their first meal of invertebrates hours after hatching into their Cretaceous world, around 66-68 million years ago, or did they sit tight by the nest and wait for mamma, or pappa, to bring them some bits of sauropod, ornithischian or other meaty herbivorous dinosaur to chew on? Did Tyrannosaurus rex engage in parental care?

Whatever the answer to this question (and it’s a biggy that fascinating me, as a behavioural ecologist who has studied care of offspring in extant species), a related question that is attracting a lot of palaeontological attention right now is how the heck did T. rex get from a relatively wee hatchling to a full grown 9-tonne terror-machine in approximately 22 years? 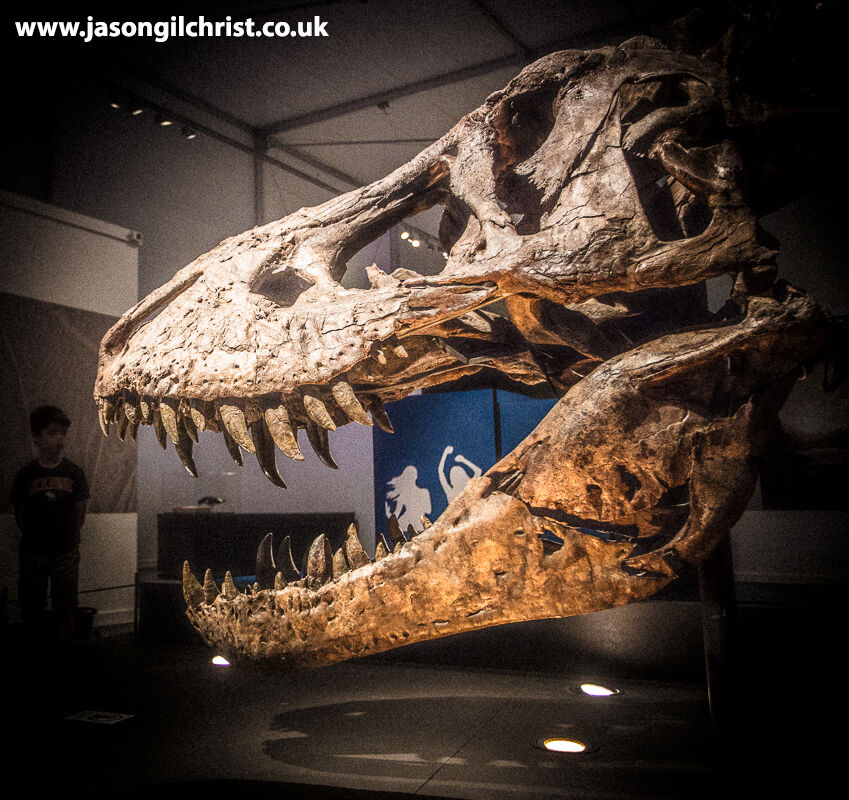 Tyrannosaurus rex. Was a bit of a monster. Not only was it the dominant carnivore as an adult, but it is thought to have covered the predatory ecological niche space from hatchling to adult life stages. Trix the Tyrannosaurs rex, at the T. rex in Town exhibition, Kelvin Hall, Glasgow, Scotland.

The answer appears to lie with accelerated growth and ontogenetic niche partitioning. This concept, as applied to Tyrannosaurus rex, indicates a single species predatory dominance across guilds that were previously occupied by a series of variously-sized theropod dinosaurs. According to palaeontologist, Kat Schroeder, presenting at the SVP conference, in Cretaceous North America, there was a huge gap in the carnivore guild between T. rex and the nearest-in-size carnivores, the diminutive (human-sized) raptor dinosaurs. This was not the case before T. rex, when the predatory niche-space was shared by a number of large predatory theropod species.

T. rex, as the primary large carnivore, appears to have covered various predatory niches as it matured, and therefore lorded it over all prey species great and small in the Cretaceous habitats of North America in which it lived. “The skeleton of T. rex changed dramatically as it matured” says Professor Steve Brusatte, in his book, The Rise and Fall of the Dinosaurs, as he refers to the maturation of Tyrannosaurus rex as akin to metamorphosis, “As youngsters, they were sleek cheetahs, as teenagers gangly looking sprinters, and as adults pure-blooded terrors longer and heavier than a bus.”

The skull of Nanotyrannus lancensis (or Tyrannosaurus rex)... Photographed at the TYRANNOSAURS exhibition, National Museum of Scotland, Edinburgh.


Enter the Nanotyrannus controversy… I have written about this before, in TYRANNOSAURS: FROM T. REX TO NANOTYRANNUS, ALL FEATURES GREAT AND SMALL, and DEATH TO NANOTYRANNUS! LONG LIVE TYRANNOSAURS!. Nanotyrannus lancensis, is a dinosaur that some palaeontologists argue was a ‘dwarf’ Tyrannosaur species that lived alongside T. rex, whilst others, including Holly Woodward et al in a recent publication, evidence via looking at patterns in bone growth, that it is ‘only’ a juvenile T. rex.

That there is any debate that the Nanotyrannus specimens may belong to a species other than T. rex, is in no small part due to the dramatic morphological changes postulated to have occurred during the maturation of T. rex during its lifetime, from hatchling to adult. This morphological transformation is dramatic and appears to differ from preceding tyrannosaur species.

To me, as a behavioural ecologist, niche partitioning within a species is an interesting phenomenon. Observations of ontogenetic niche partitioning in extant species indicate that ONP occurs in some invertebrate, fish, amphibian and reptiles species. In the world today, our larger terrestrial carnivores are mammals and birds, e.g. lions, tigers, wolves and eagles. All of these species display parental care – where young are raised to adult size on prey captured by their parents or other group members.

In modern predatory mammals extended parental care is the norm, so it’s the parents who do the predation to feed their offspring. In birds, at independence, fledglings are generally of adult size and diet. So, the young are not occupying a dietary and predatory niche independent of their parents (the adults). Each species therefore leaves ecological space for other predator species.

Whilst it is likely that, as for other dinosaurs, T. rex engaged in parental care, it is unlikely that they provided extended care for their offspring according to Dr. David Hone (in his book, The Tyrannosaur Chronicles). So, whilst Woodward et al’s study strengthens the case for ontogenetic niche partitioning (ONP) in T. rex, ONP is minimal in present-day large carnivore communities.

Ofcourse, we don’t have any terrestrial predators that come anywhere near the gigantic size of T. rex and its massive tyrannosaur predecessors. In my fieldwork in Uganda, I encountered lions and leopards, and on occasion some very large snakes… But my main concerns were the large herbivores occupying the habitat: elephant, hippo, and buffalo. Which were dangerous enough. Imagine living alongside a mega-predator like T. rex, and imagine it, not only as a terrifying adult, but as a series of formidable predatory intermediate stages from egg to adult…? I wouldn’t want to meet a juvenile T. rex, never mind an adult.

Care of young therefore has effects beyond the species, and up to the ecosystem level. Rather than having a diversity of predatory species filling different niche space, T. rex appears to have truly monopolised the carnivore guild space of the Cretaceous, by occupying that predatory niche space as it matured – because it was likely precocial (independent of parental care from hatching). 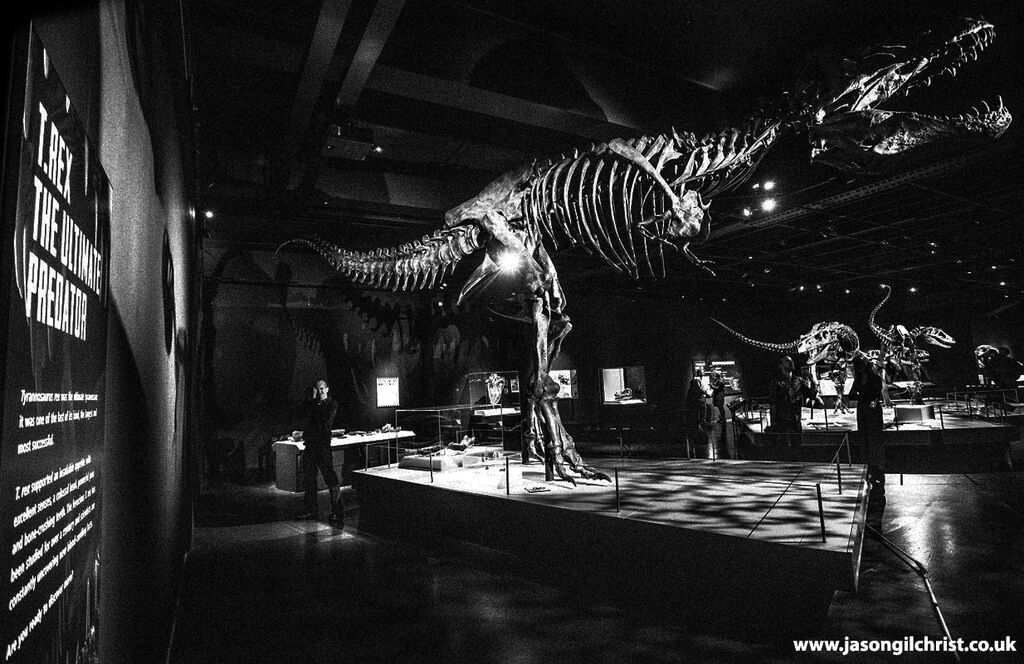 Tyrannosaurus rex. The Ultimate Predator. Cast of Scotty, the largest T. rex ever excavated. TYRANNOSAURS exhibition, at the National Museum of Scotland, Edinburgh.


Professor Tom Holtz summarises the ONP concept as applied to Tyrannosaurus rex as such: “An animal that is born from an egg the size of a volleyball that winds up as big, or bigger, than an elephant cannot help but pass through many ecological niches as it grows. A single T. rex is practically the equivalent to an ecological community.”

The insight that recent scientific studies are giving into the life history and behavioural ecology of extinct dinosaurs (including tyrannosaurs), and other extinct giant reptiles (e.g. pterosaurs) is jaw-dropping. With evidence comes understanding, and the more that we learn, the more miraculous, and diverse, extinct ecosystems become. To the point that the structuring of the ecosystem that Tyrannosaurus rex lived within was fundamentally different to the ecosystems that we observe today. And that may be due to T. rex itself. Truly the Tyrant King of the dinosaurs! 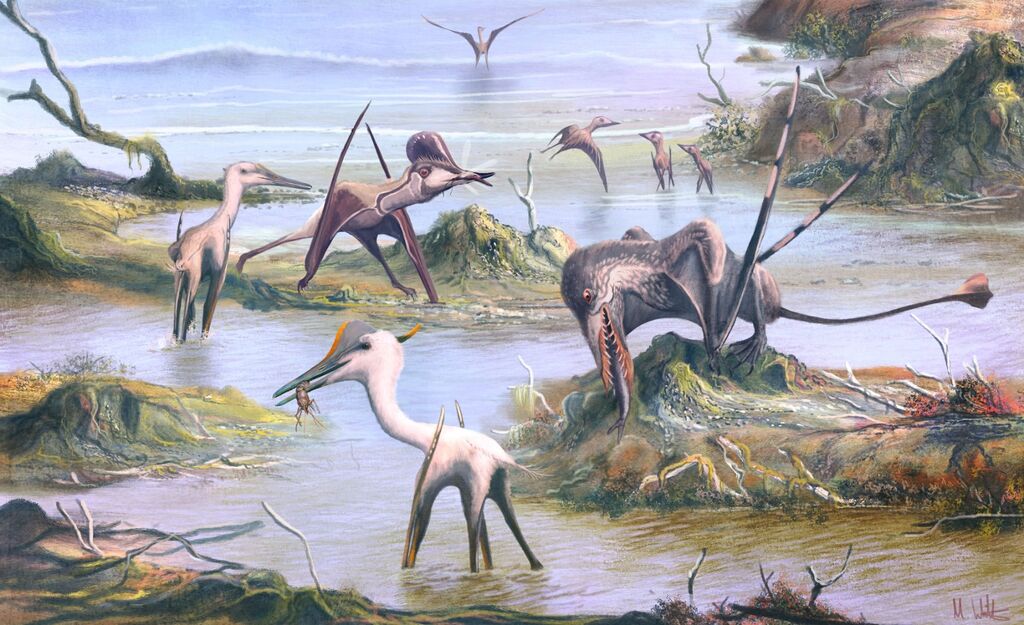 Gilchrist, JS (2020) TYRANNOSAURS: FROM T. REX TO NANOTYRANNUS, ALL FEATURES GREAT AND SMALL.