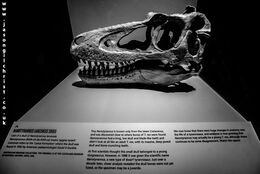 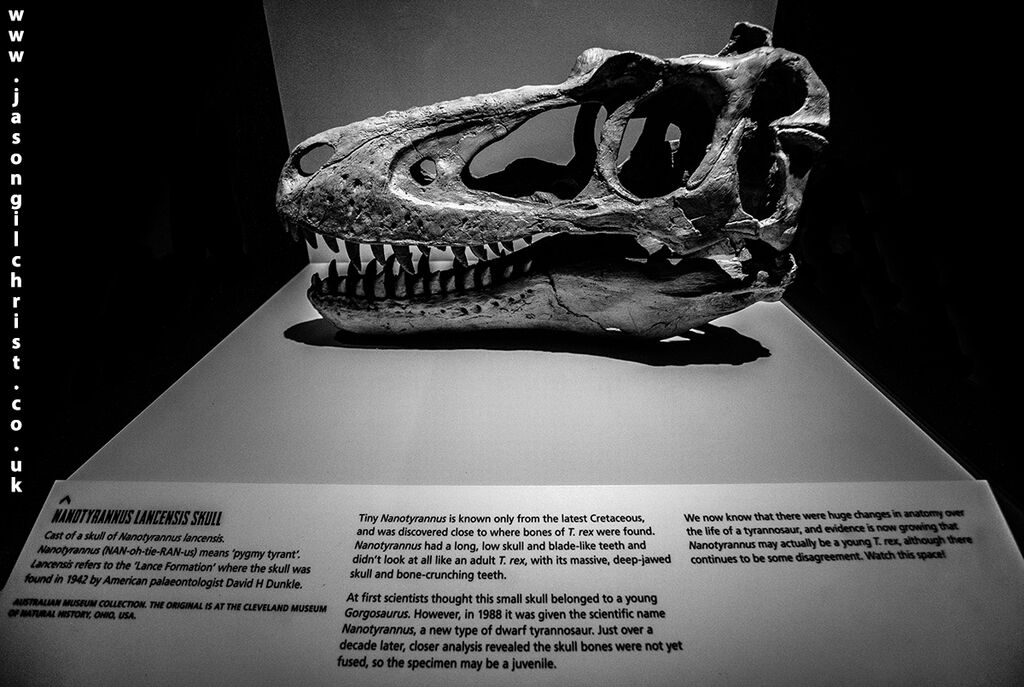 Nanotyrannus lancensis, or is it (Tyrannosaurus rex)? Skull of the controversial dinosaur, at TYRANNOSAURS, the exhibition, National Museum of Scotland, Edinburgh.

COVID-19 has had many unfortunate effects on society in various forms and at various levels. Amongst other things, the pandemic has disrupted science and the arts, and with the recent de-construction of the TYRANNOSAURS exhibition, at the National Museum of Scotland, Edinburgh, it left an unrequited audience. The much-anticipated dinosaur exhibition opened on January 24th 2020, and was due to run through to 4th May 2020, but closed prematurely with lockdown in March 2020. Hopes of TYRANNOSAURS re-opening to the public were sadly dashed with the recent dismantling of the full-size tyrannosaur skeleton casts, and transport onwards to the exhibition’s next destination, Virginia USA, and the careful packaging and returning of tyrannosaur fossils to the Carnegie Museum of Natural History, USA.

The National Museum of Scotland, Edinburgh, was TYRANNOSAURS European debut, and as it stands, its only European showing, the exhibition on tour from the Australian Museum. Hopefully, the exhibition can return to European soil sometime in the future, to amaze, educate and inspire once more. Where else can you stand amongst 5 full-size tyrannosaur skeletons, and alongside 7 full-size tyrannosaur skulls? In the meantime, while you wait, do visit the Blog that I wrote to celebrate the arrival and opening of the Tyrannosaurs exhibition to the National Museum of Scotland: TYRANNOSAURS: FROM T. REX TO NANOTYRANNUS, ALL FEATURES GREAT AND SMALL, and associated photo gallery, TYRANNOSAURS: THE EXHIBITION.

As the title of the aforementioned Blog suggests, Nanotyrannus was very much at the forefront of the palaeo-conscience at the time. Nanotyrannus lancensis is a disputed species, attributed to fossil skeletal and skull specimens that overlapped in time and space with Tyrannosaurus rex. A paper evidencing the ‘Nanotyrannus’ specimens as immature Tyrannosaurus rex, covered in my TYRANNOSAURS: FROM T. REX TO NANOTYRANNUS, ALL FEATURES GREAT AND SMALL Blog, hit the press in January 2020, narrowly preceding the opening of TYRANNOSAURS in Edinburgh… 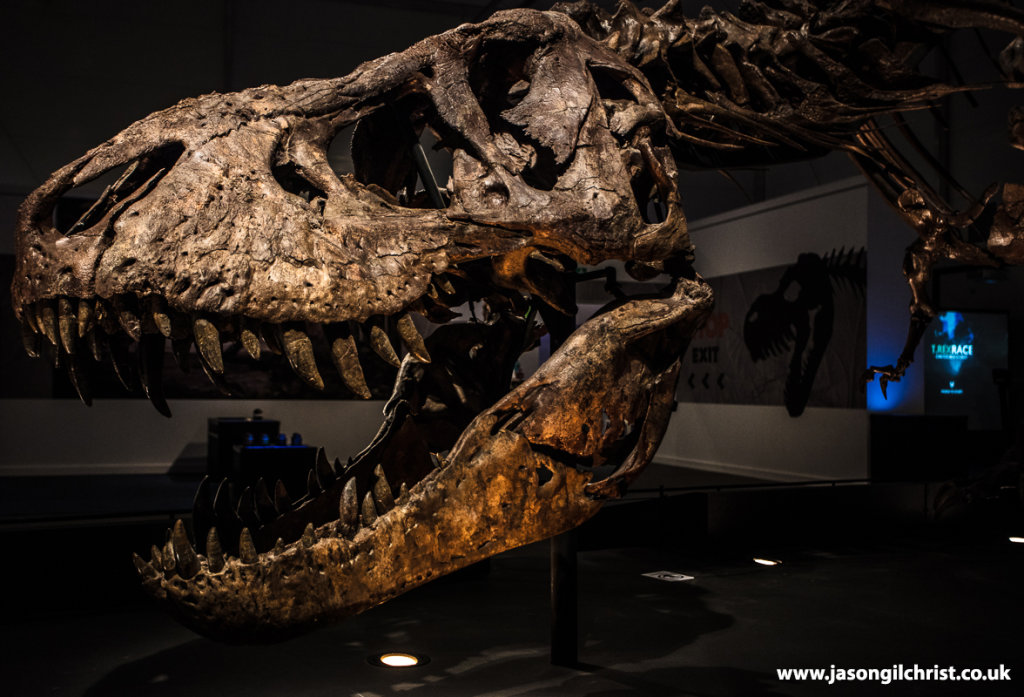 Meanwhile, global pandemic or not, whilst TYRANNOSAURS, the exhibition, was being packed into crates in Edinburgh, the Nanotyrannus debate continued amongst palaeontologists… with a couple of notable volleys flying across the scientific airwaves. Firstly, Ruger et al 2020 responded to the Woodward et al 2020 paper. They questioned the use of histological (bone section data) over morphology data, and suggested that the Nanotyrannus hypothesis remains valid, and that the specimens examined by Woodward et al 2020 fail to “settle the taxonomic dispute”, or to refute the possibility that the specimens examined belong to a tyrannosauroid species other than T. rex. The conclusion of Ruger et al is that “As of today, the most parsimonious route is to assume that N. lancensis represents a more gracile tyrannosaurid species, sympatric with T. rex.”. 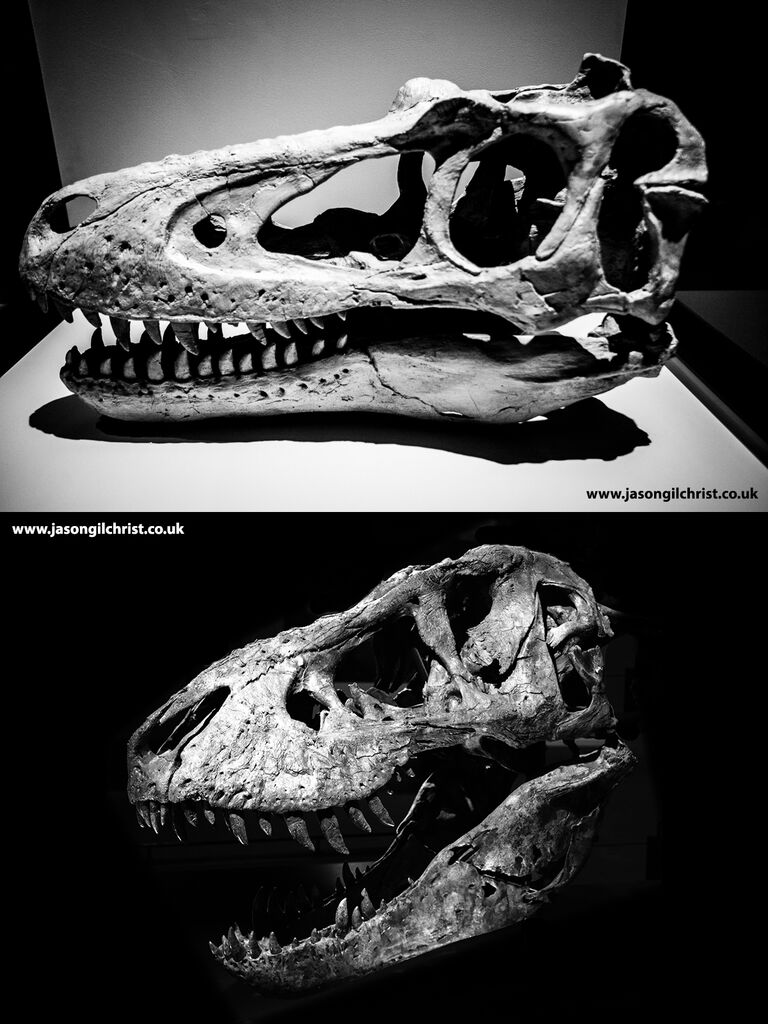 Spot the difference. Nanotyrannus lancensis (top) vs adult Tyrannosaurus rex (bottom) skull. These tyrannosaur dinosaur skulls are morphologically different, but does that indicate differing taxonomy or ontogenetic restructuring during maturation? Some palaeontologists believe that the upper skull belongs to a pygmy tyrannosaur species Nanotyrannus lancensis whilst others argue that it belongs to a juvenile Tyrannosaurus rex. 'Nanotyrannus' skull (cast) photographed at TYRANNOSAURS exhibition at the National Museum of Scotland, Edinburgh. Adult T. rex skull is Trix, photographed at the T. rex in Town exhibition, Kelvin Hall, Glasgow.

The authors of the original paper, Woodward et al, joined by Professor Thomas Carr, a palaeontologist with expertise in T. rex growth series, bite back, and support their original conclusion, “that diminutive latest Cretaceous tyrannosaurs from western North America are juvenile T. rex”. They do so by clarifying aspects of bone histology, and therefore bone growth, by bringing in evidence of understanding from extant species, including the skeletochronology (ageing a skeleton via growth rings in the bones) of turtles, American alligator, and other wild vertebrates. The ‘pygmy’ tyrannosaur specimens examined, remain, in the light of their accumulated evidence, juvenile tyrannosaurs, and exhibiting of features synonymous with Tyrannosaurus rex.

Whichever side of the Tyrannosaur fence you stand, there is no disputing the interesting nature of these fossil dinosaur specimens, whether Nanotyrannus lancensis or Tyrannosaurus rex… I suspect that Nanotyrannus has not been fully exterminated yet, at least in the minds of some palaeontologists, so keep your dinosaur-senses at the ready for future salvos in the great Nanotyrannus did it/didn’t it exist debate… 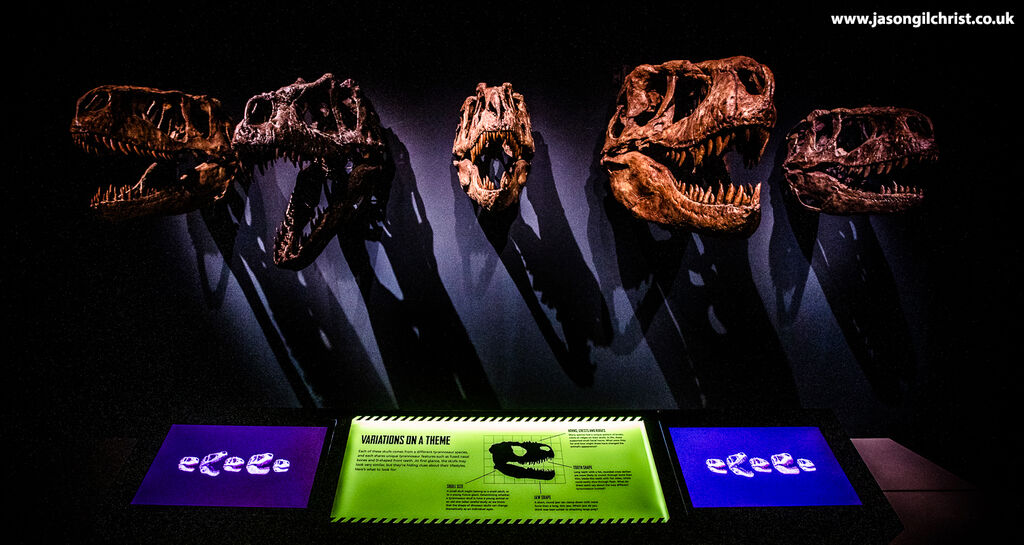 TYRANNOSAURS - at the National Museum of Scotland

TYRANNOSAURUS REX AND THE DINOSAUR TEETH OF SKYE: WINDOWS INTO THE LIVES OF DEAD DINOS

TYRANNOSAURS: FROM T. REX TO NANOTYRANNUS, ALL FEATURES GREAT AND SMALL

TYRANNOSAURS: THE EXHIBITION
Next
Previous