The weekend of 27th June 2015 saw the peak of the first flowering in history of Amorphophallus titanum in Scotland at the Royal Botanic Garden Edinburgh (RBGE). A botanically momentous event. The plant’s various names, including titan arum, or corpse flower (buna bangkai in Indonesian), reflect its spectacular and peculiar characteristics. Literal translation of the scientific name, Amorphophallus titanum, highlights the resemblance of its morphology to a giant unusually shaped penis. At a height of 267cm, a weight of 153.9kg, and with a growth rate in the season of up to 15cm a day, it was both large and fast. And smelly. Titan arum did not earn its corpse flower moniker for its looks. You may not associate an aroma of a stinking rotting carcass with helping one attain reproductive success (if you do – I suggest changing your aftershave), but it is crucial in attracting the insects that, in nature, will pollinate the giant inflorescence. In its native Sumatra, carrion beetles and sweat bees are attracted to Amorphophallus titanum by the false promise of rotten meat. Titan arum is cheating during its all-too-brief flowering period (it flowered for 3-days after twelve years of cultivation at RBGE) – but it does so to promote pollinator visits to the male and female flowers that are housed (internally) at the base of the hollow erect spadix.

The flower is both the smelliest, and the largest (inflorescence) in the world.

I had to visit. Who knows when we next we will see the likes of New Reekie at the Botanics again? I was not alone. Over the course of peak flowering, our Scottish corpse flower attracted an astounding number of visitors (over 5000 on the weekend alone). People were arriving by taxi direct from the airport. International tour buses were parking at the gate. Titan arum had its own Twitter account. A queuing system was in place, and access to the titan was limited to a narrow one-way path. So with time and space limited and the additional restriction of no tripods allowed, photography was a challenge. That challenge inflated further upon arrival with the steaming up of every piece of glass to enter the tropically humid glasshouse. I was expecting this condensation problem but that did not make it any easier to control or fix. At least I could see – the poor chap behind me had his glasses steam up and, like my lenses, re-steam up after every wipe clean. With my two most-used lenses in for repair, I felt the photographic gods were very much against me. I soldiered on and focused on detail (rather than the plant as a whole) and context (the flower as an attraction to people).

The swollen colourful flower exuded a brazen but prehistoric fecundity. The event and the flower represented a rare spectacle as people gathered, queued, chatted excitedly as they waited, and then filed ceremoniously past the regal phallus. The ‘system’ may have resembled a state funeral, but the summery attire of visitors and the penchant for selfies dismissed any further visual similarity. Alongside the stifling humidity, the atmosphere was filled with joy, not sadness. Nevertheless, as I shuffled past the giant corpse flower, I considered a state funeral a suitable analogy, as the flower would soon fade (it lasted 3-days in its pomp), and with it, the spectacle and opportunity for a similar experience for another how many years. And what of Amorphophallus titanum in nature? Its survival in the wild (the Bukit Barisan mountain region of the Indonesian island of Sumatra) is threatened by habitat destruction, with deforestation via logging, and conversion of land to oil palm plantations contributing to the endangerment of this most spectacular of plants. Seeing such a plant in Scotland is a fantastic and welcome opportunity. Knowing it continues to go about its natural business in Sumatra is all the more important having seen its popularity to visitors and the wonderment in their eyes.


Click here to find out more about New Reekie at the Royal Botanic Garden Edinburgh. 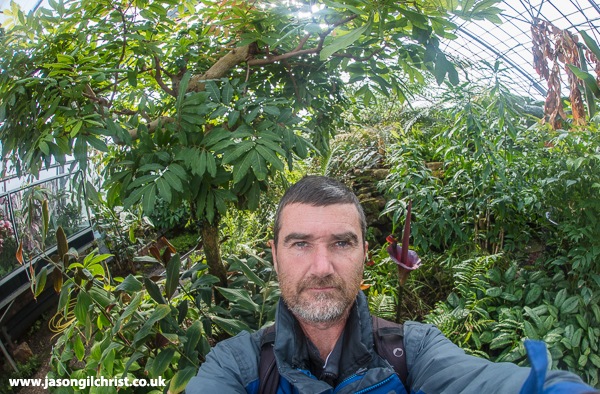