Conservation Communication: Getting the Message Across

When we sit back and view a photographer’s images, or even a film unit’s documentary or film, we see the images (and in a documentary we get a message), but what we often do not get is into the head of the photographer or cameraman (or soundman). John Aitchison did a wonderful job in his presentation (and in his book: The Shark and the Albatross) of providing an insight into his personal thoughts and concerns; the dilemmas that he wrestles with as a wildlife filmmaker. Keith Partridge gave us a peek into his life as an adventurer who carries a camera, the places he has visited, and the people he has worked with (as described in his book The Adventure Game). At SNPF, as usual, the diversity of photographers, style and subject was impressive and insightful. Again, crucially, we got more that ‘just’ the photographs, all of which were compelling enough in isolation. In particular, Britta Jaschinski’s presentations, highlighting the animal welfare challenges posed by Zoos, and the role that Traditional Chinese Medicine plays in animal cruelty on an industrial scale, were uncomfortable viewing and listening. Commendations to SNPF and Britta for showing such bravery in bringing these thorny issues to public attention. There are not enough questions asked about the ethics and welfare of keeping (wild) animals in captivity. And we can do a lot more to show our disgust and unwillingness to accept the illegal trade, mistreatment, and killing of wild animals associated with TCM (Zoos hiring pandas from China does not achieve this). Laurent Geslin exhibited a different form of dedication; in working long nights and early mornings buddying (equally-dedicated) conservationists and patiently placing and monitoring hundreds of camera traps to capture the conservation story of the European Lynx. Alongside Britta and Laurent, we were reminded of the beauty, wonder and interest that the natural world instils in us (and therefore why we should care about it), by the presentations of the other photographers, including David Maitland who took us on a journey into another world; a micro-world via his macro-photography.

Pete Cairns of the Wild Media Foundation (who runs SNPF) has for years proffered the wise advice that taking good photographs is not enough; we need to tell stories with our images. In particular, if we want to make a difference (in a meaningful sense, i.e. by influencing people and thereby facilitating conservation).

The phrase “a picture says a thousand words” is one that I have found increasingly attractive as the years go by. That may sound strange from a scientist, but effective stills images can convey a beauty, awe, and concern that written words simply cannot attain no matter how hard or far they stretch. Nevertheless, these recent photographer live events, and their ‘behind the camera’-eye books, have re-instilled in me a faith in the importance of words; spoken and written. I am becoming increasingly convinced of the value of words, most impactful when pitched alongside images. Photographer-writer Niall Benvie has lead the field in this domain, in effectively marrying words and images to maximise the impact of their combined force, encouraging the viewer to think and engage more deeply with the subject than either the image or the words alone could accomplish.

My own recent efforts, to raise and maintain awareness and concern in support of rhinoceros conservation, via articles published by online news-commentary source The Conservation, follow this line. Both articles, Spy-cam Rhinos to Take on Poachers with Devices Hidden in their Horns, and Chopping off the Rhino's Horn and the War on Wildlife Crime, feature one of my white rhino images complementing the short and simple accompanying text.

A major concern about the role of science in society today is that it does not make a good enough job of communicating to either the public or politicians, who together represent the most powerful influence on our Planet and its future. Science (and academia generally) needs to get better at effective communication; and The Conversation, alongside the end-use driven output of organisations like Conservation Evidence are steps in the right direction to get science and academia informing society’s decisions and direction.

De-horning (horn removal) of white rhinoceros. Image published in online article Spy-cam Rhinos to Take on Poachers with Devices Hidden in their Horns. 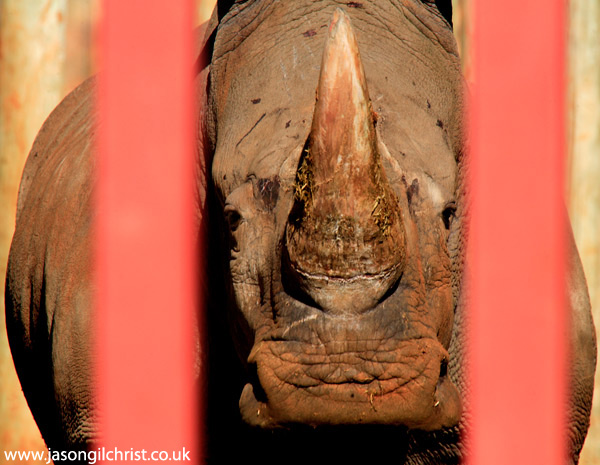 Behind bars; caged white rhinoceros awaiting translocation. Image published in online article Chopping off the Rhino's Horn and the War on Wildlife Crime

The header image, We Need to Save the Rhino's Ass, not only its' Horn (click Blog if you cannot see it) highlights my concern that there is a danger we forget about the rhino in the debate about its horn.

To view my rhino articles, and learn more from other resources referred to above, click on the links below.

Chopping off the Rhino's Horn and the War on Wildlife Crime