RAY HARRYHAUSEN: TITAN OF CINEMA - Tribute to an Exhibition 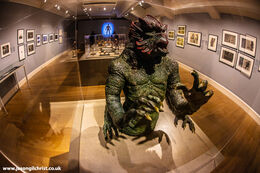 Out of the darkness, strides a skeleton, and another, and another. Armed with shields and swords, they swivel and thrash, swords arcing, with a swooshing sound, down toward their enemy, which right now appears to be you. Alongside the skeletons, to one side, stands an iron giant, mechanically and ominously clomping and creaking towards you. Beyond, a winged and taloned demon hovers in a frightening flap…


Welcome to the wonderful, adventurous, imaginative, fantasy worlds of Ray Harryhausen, movie special effects pioneer and genius, whose art was recently brought back to life at the RAY HARRYHAUSEN: TITAN OF CINEMA exhibition at the Scottish National Gallery of Modern Art, Edinburgh, showcasing the Ray Harryhausen archive via the Ray and Diana Harryhausen Foundation.

The exhibition featured original models, sketches, paintings, key art, and storyboards all by Ray Harryhausen, alongside movie posters, memorabilia, photos and personal items from the Ray Harryhausen archive (including some of his paintbrushes, and his OSCAR and BAFTA awards). As a Harryhausen fan, visiting the exhibition, I felt like a child in a sweet shop (or a kid in a candy store), on steroids. To see the actual original Ray Harryhausen models up close, in all their exquisite detail (in most cases restored by Ray's conservator, Alan Friswell, so that we can enjoy them as Ray originally intended) is difficult to describe.

Familiar creatures from movies viewed as a child, there in front of me, miniature marvels. Sketches that show Ray's original conceptual ideas. Including ideas for movies that were never made, e.g. H.G. Wells' War Of The Worlds. Photos, taken on family holidays, where Ray scoped for filming locations. It was numbing to see such a professional and personal collection of someone so gifted, who gave so much to so many, in creating fantastical stories, creatures (monsters included) and worlds. Exiting the exhibition, into the cold light of day, felt like a jolt, out of a mystical world of imagination, back to reality. Much the same way that cinema-goers would have felt upon leaving a Harryhausen movie at the cinema. But the wonder of the worlds experienced in those moments of escape are not to be forgotten.

The exhibition has garnered visits by a plethora of celebrity Ray Harryhausen enthusiasts, including Edinburgh-based crime novelist Ian Rankin, The Stranglers vocalist Hugh Cornwell, The League of Gentlemen’s Reece Shearsmith, and Paleontology Advisor on the upcoming Jurassic World Dominion movie, Professor Steve Brusatte of the University of Edinburgh. 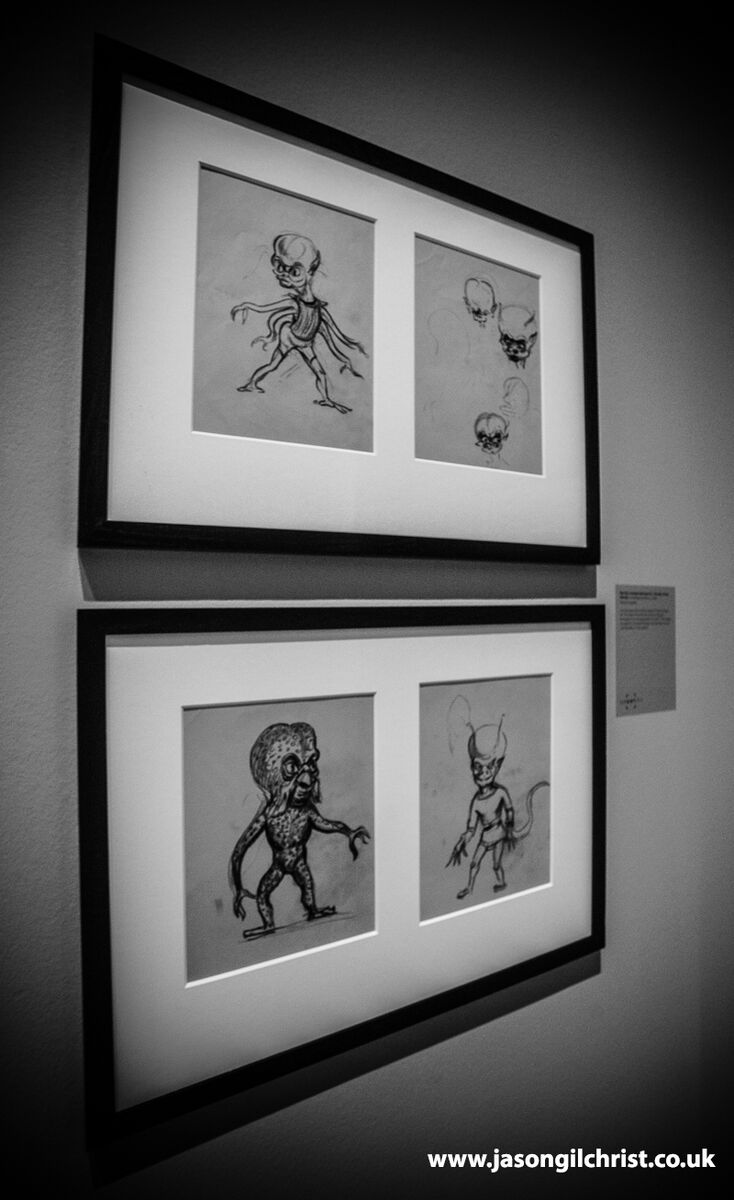 
Alongside the physical exhibition, the Gallery, cajoled into digital creativity by the impacts of COVID-19, at the very least curtailing people’s enthusiasm for travel, ran a virtual exhibition alongside the Edinburgh show, ending 28th February 2022. Wherever you are in the world, you could tour the exhibition from the comfort of your own home, experiencing the creatures, and associated Harryhausen archive objects, from a different and dynamic perspective.

As for the physical exhibition, the now-static original Harryhausen models, were complemented by digital reconstructions that brought the rejuvenated creatures back to life, moving, and making noises, thanks to the work of the likes of Revenant, with modern technology applied to digitally 3D scan the original models, from movies going as far back as Mighty Joe Young (1949). There was also a Smartify App, with commentary from film director John Landis. And an augmented reality function where users could bring a skeleton (back) to life wherever they may be… 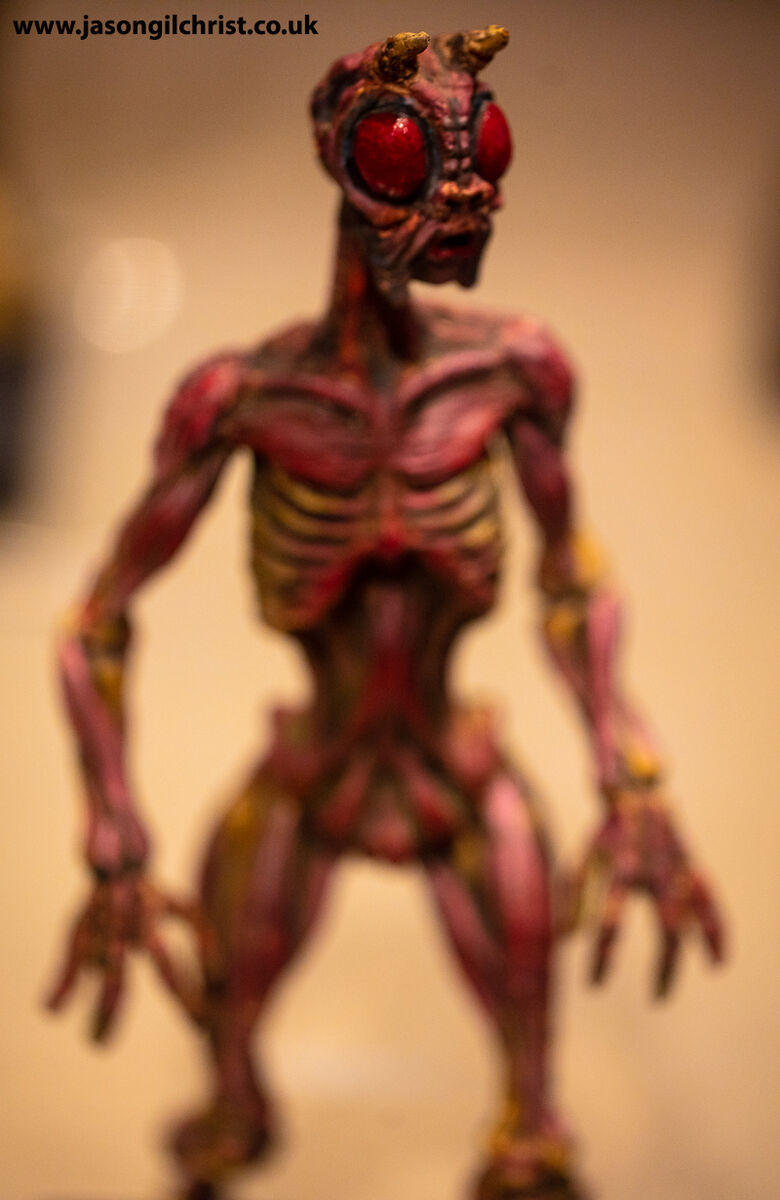 Ghoul, original model by Ray Harryhausen, from Sinbad And The Eye Of The Tiger.


Allied to the virtual exhibition were a series of live online events with celebrity Harryhausen fans, interviewed on the influence that Ray Harryhausen had on their lives and careers. Guests included stars of Harryhausen movies Martine Beswick (One Million Years BC) and Caroline Munro (The Golden Voyage of Sinbad), who also starred for Hammer House of Horror, and as Bond Girls. Tom Woodruff Jr, of Alien movies, stop-motion Ardmann Animation guru, Peter Lord, and Mark Gatiss and Jeremy Dyson of The League of Gentlemen, who also share their thoughts on storyteller Ray Harryhausen.

Alongside the exhibition, Ray’s daughter, Vanessa, has written a book, Ray Harryhausen: Titan Of Cinema, reminiscing on her personal experiences of Ray in life and work, anchored by 100 objects from the exhibition. So, even when the exhibition ends, the memories continue…

The Ray Harryhausen archive is a massive thing! With over 50,000 items. And even the largest ever exhibition only scratches the surface of the creative output of, and influences on, and of, Ray Harryhausen. But what happens to the figures and objects when RAY HARRYHAUSEN: TITAN OF CINEMA closes its’ doors? Does everything go back into dark storage vaults?

There are murmurings of the exhibition (or parts of) going on tour, at some future point, to enable other parts of the country, and world, to marvel at the creative genius of Ray Harryhausen. And a desire that a permanent home may be found for at least some of the Harryhausen collection. 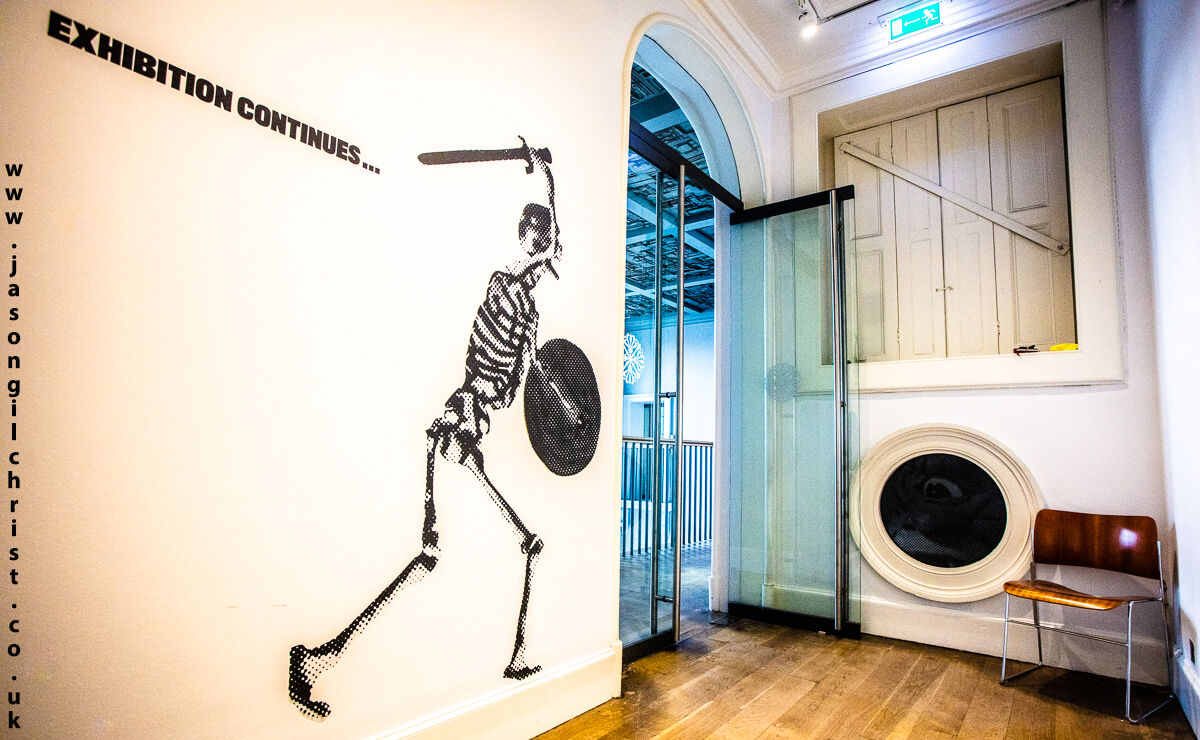 
2022 also sees the inaugural Ray Harryhausen Awards, with numerous awards encouraging today’s animators to strive for excellence across a number of film award categories, inspired by, and in honour of, Ray Harryhausen.

So, the magic of Harryhausen will live on, for future generations to enjoy. As it should do, given the timeless nature of its storytelling. And the place that Harryhausen and his movies hold in cinema history. I, for one, am grateful to have had the opportunity to return to the fantasy worlds of Ray Harryhausen: Titan Of Cinema. 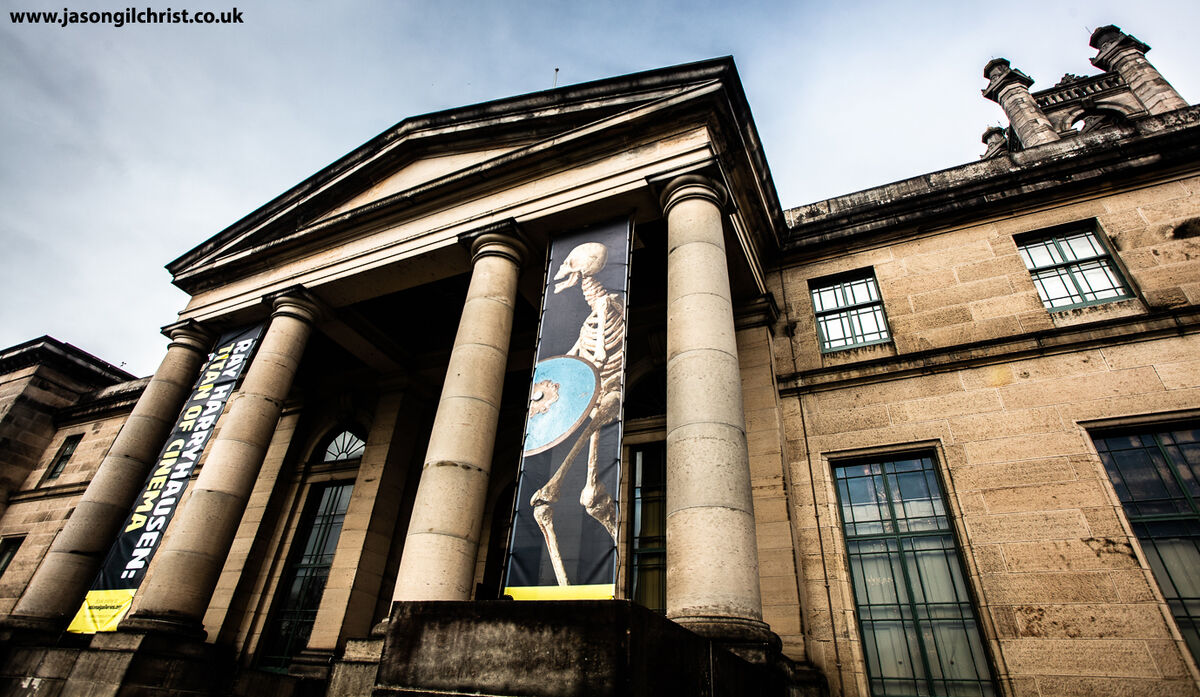 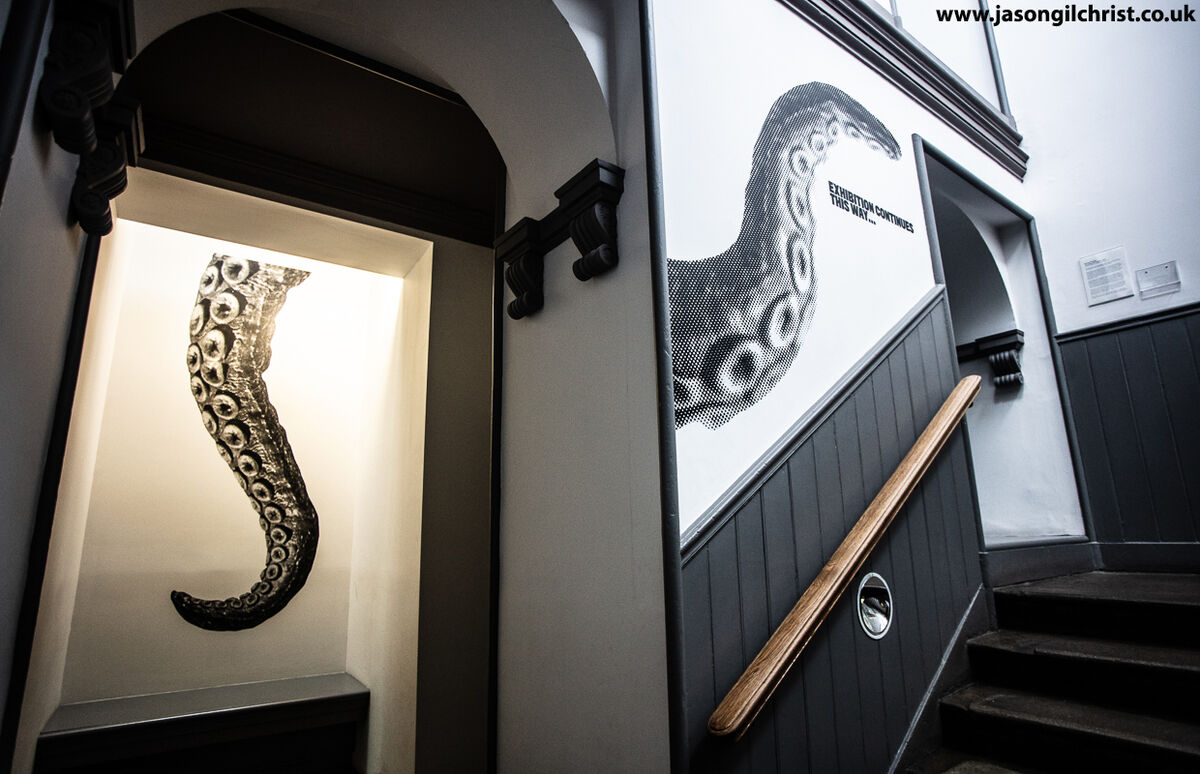 Exhibition Continues This Way...? It Came From Beneath The Sea... wall art at the Ray Harryhausen: Titan Of Cinema exhibition. 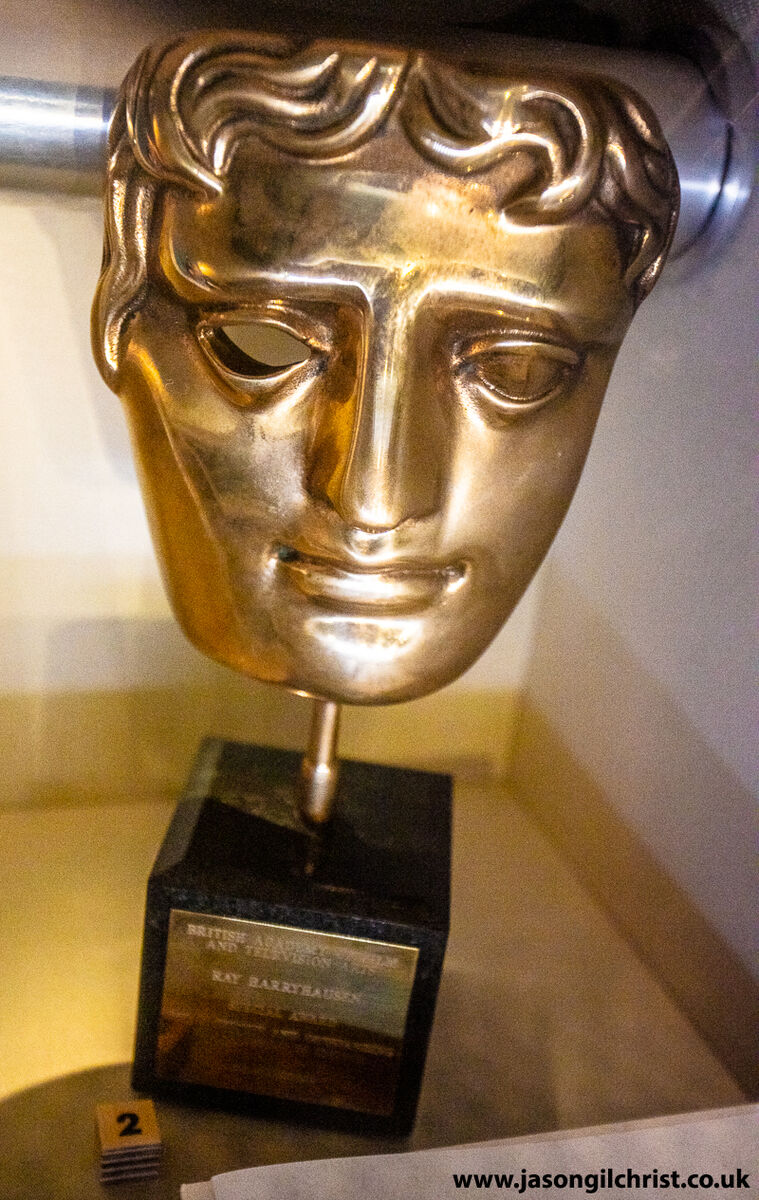 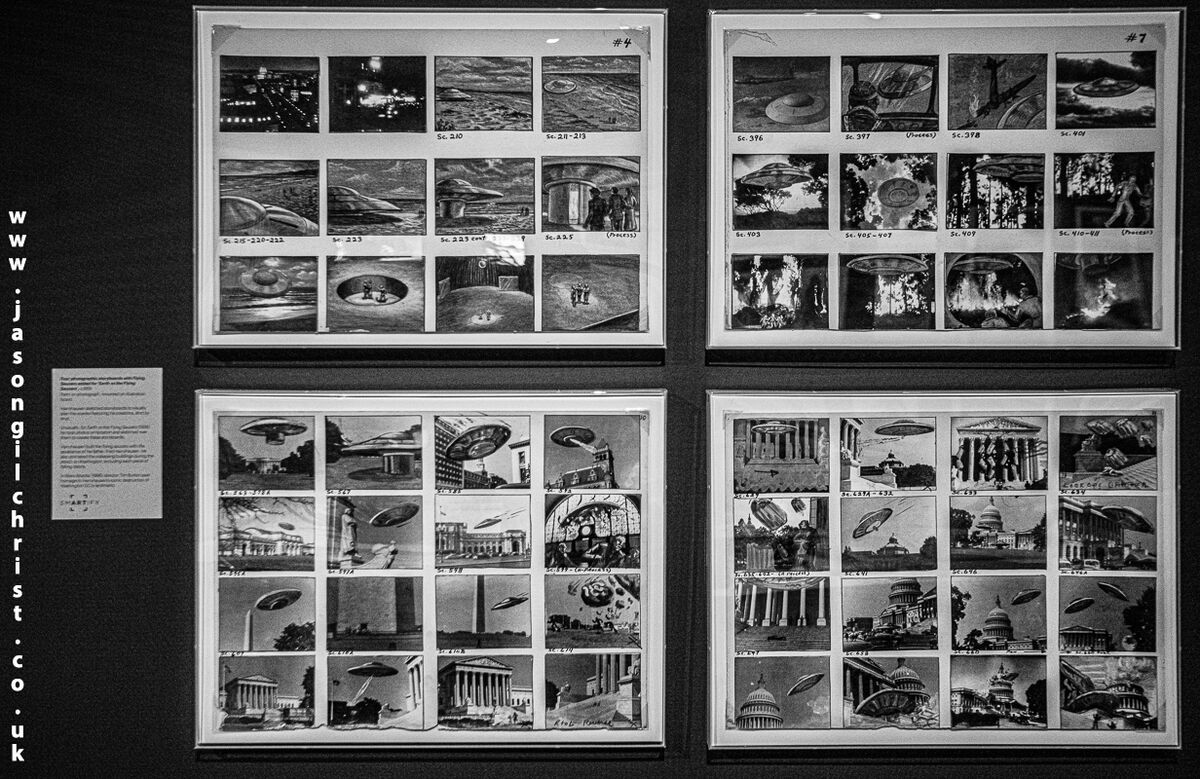 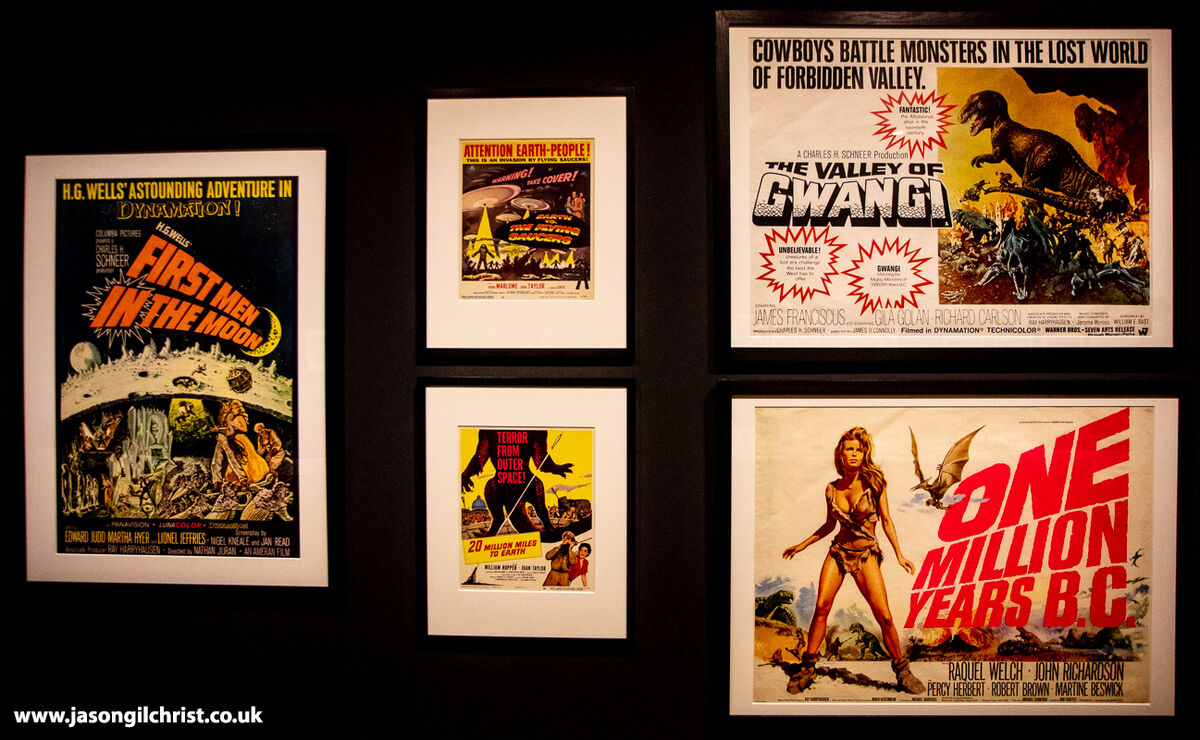 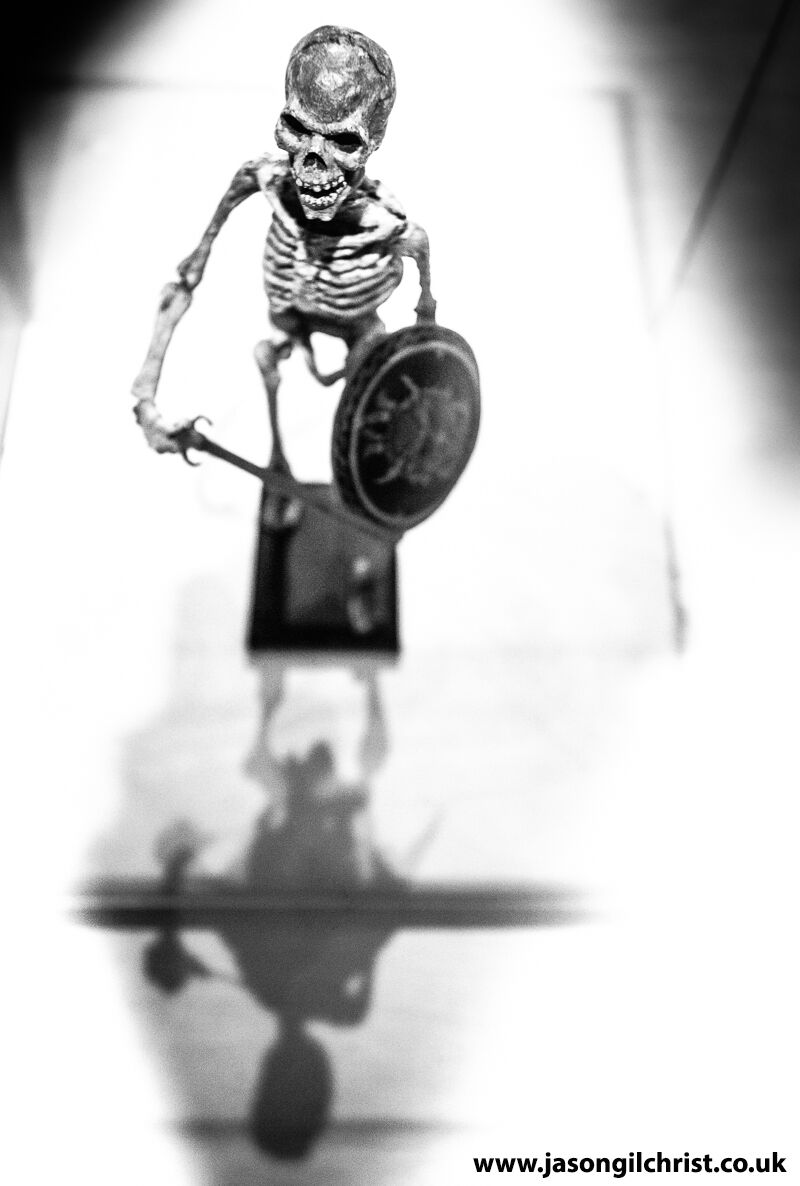 Original model skeleton from Jason And The Argonauts. By Ray Harryhausen. 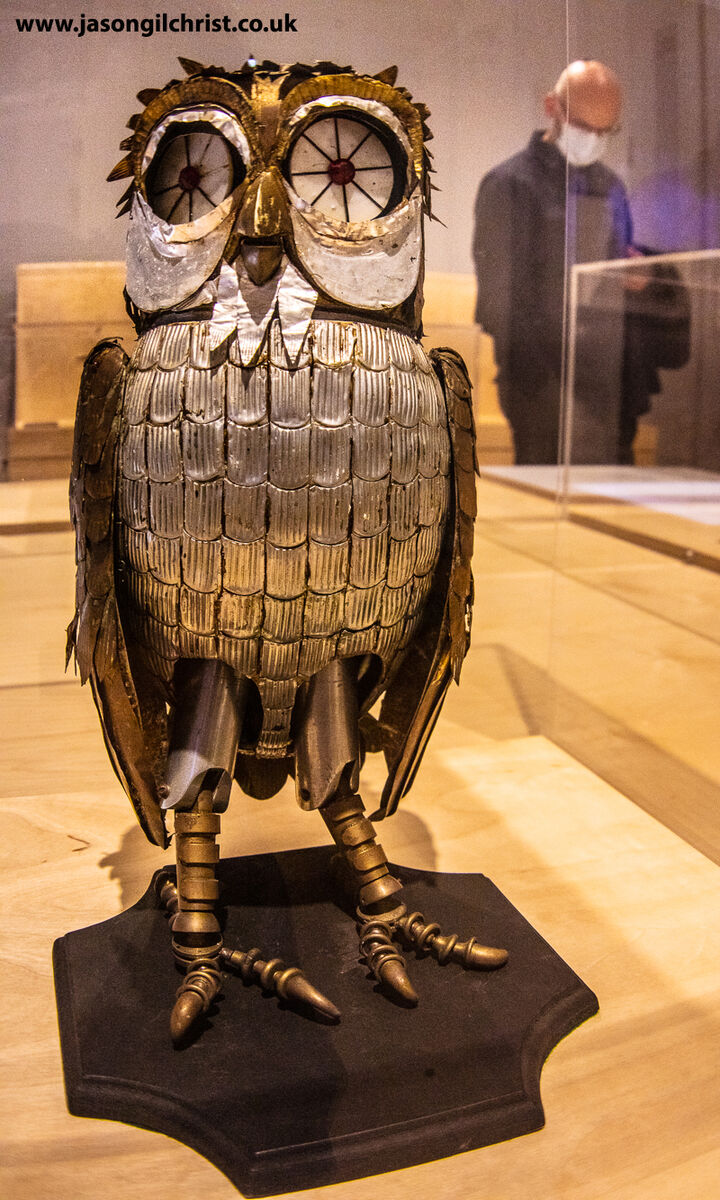 Bubo the owl. Original model from Clash Of The Titans. By Ray Harryhausen. 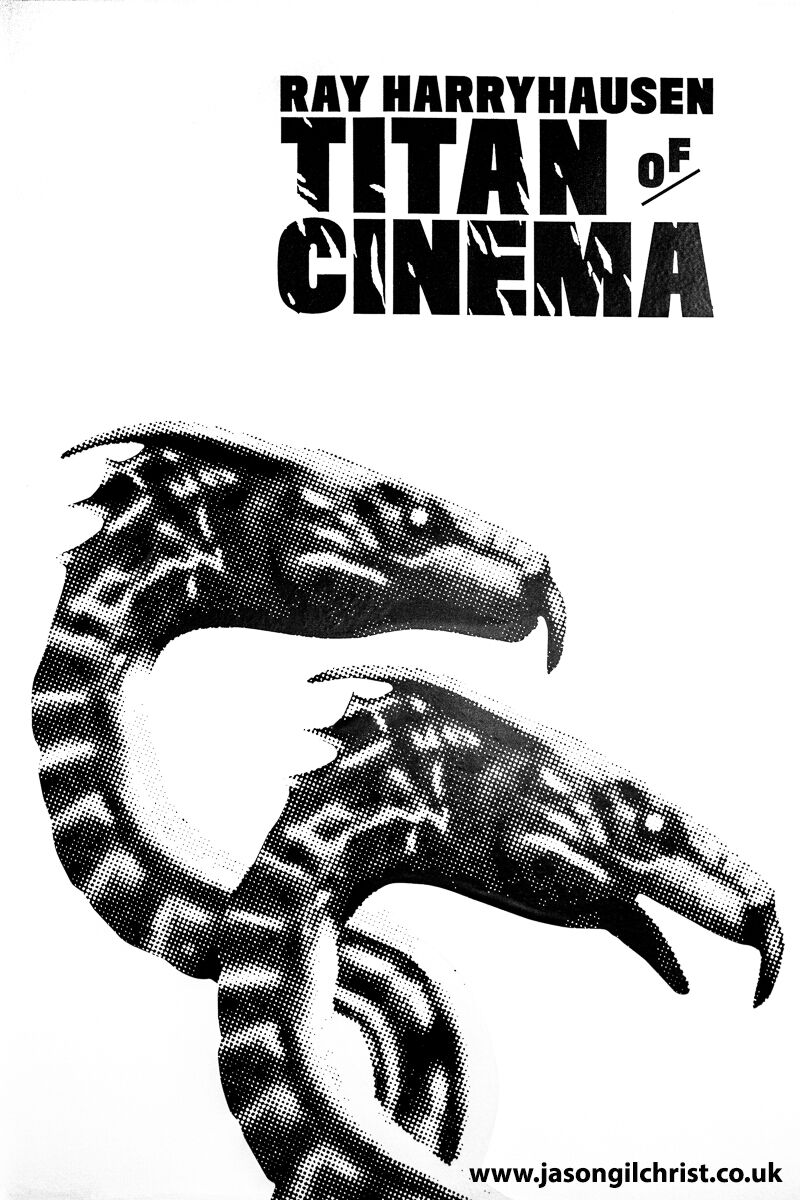 Self portrait. With the Hydra. At the green screen. Ray Harryhausen: Titan Of Cinema exhibition at the Scottish National Gallery of Modern Art, Modern Two, Edinburgh, Scotland. Maybe I should have defended myself, rather than taking a photo...

Self portrait. With the Children Of The Hydra's Teeth (the skeletons). At the green screen. Ray Harryhausen: Titan Of Cinema exhibition at the Scottish National Gallery of Modern Art, Modern Two, Edinburgh, Scotland. You would think, having lost out to the Hydra, that I would have tried to do something more original than standing passively taking a photo, as the skeleton army advanced toward me. Ultimately, to hack me horribly to pieces. I should have run away... 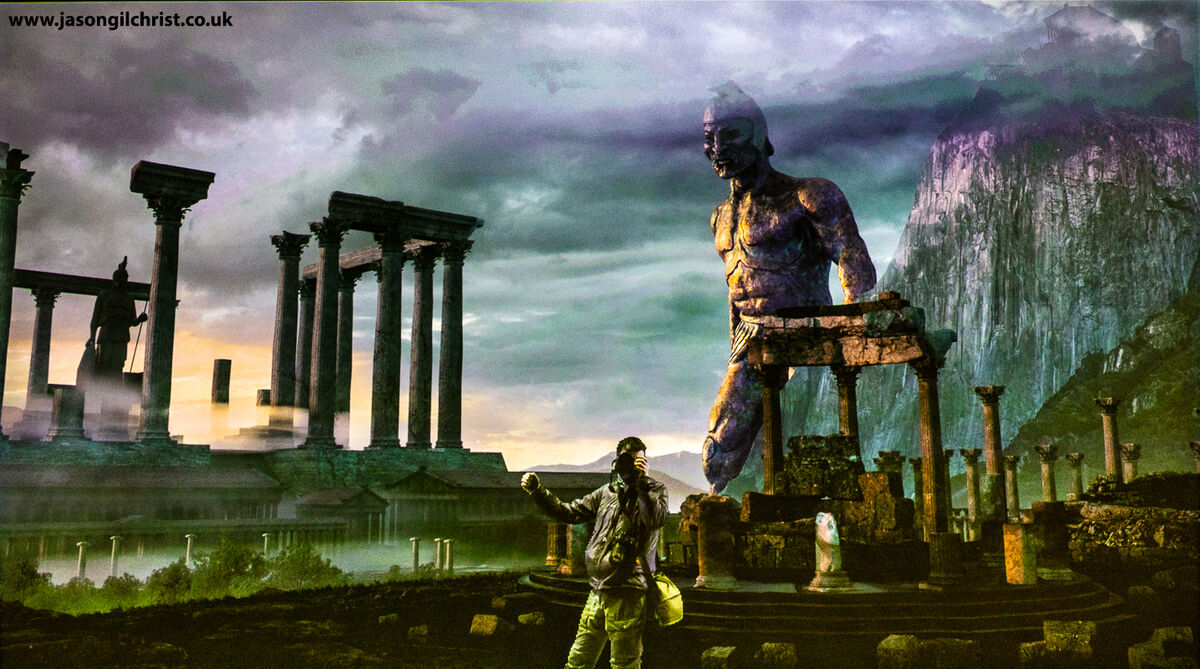 I don't know who this guy is. But he is an embarassment... OK, it's a self portrait. With Talos. At the green screen. Ray Harryhausen: Titan Of Cinema exhibition at the Scottish National Gallery of Modern Art, Modern Two, Edinburgh, Scotland. And then, when he finally defends himself against a Ray Harryhausen creature, he looks to the wrong side of the screen... Classic pantomime "he's behind you" shout-out situation. 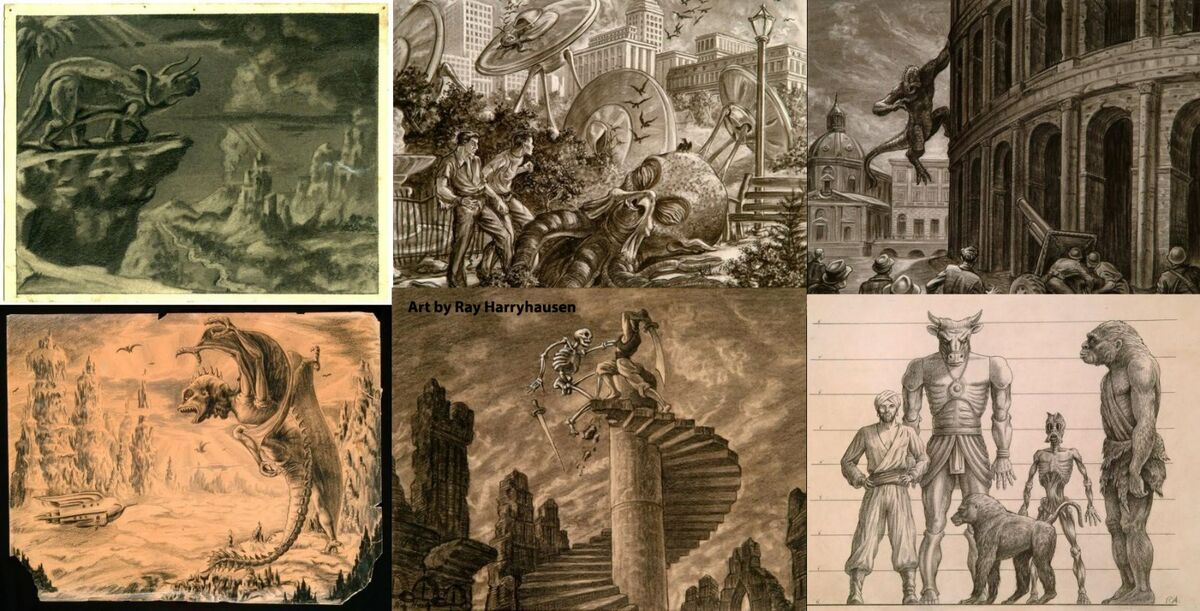 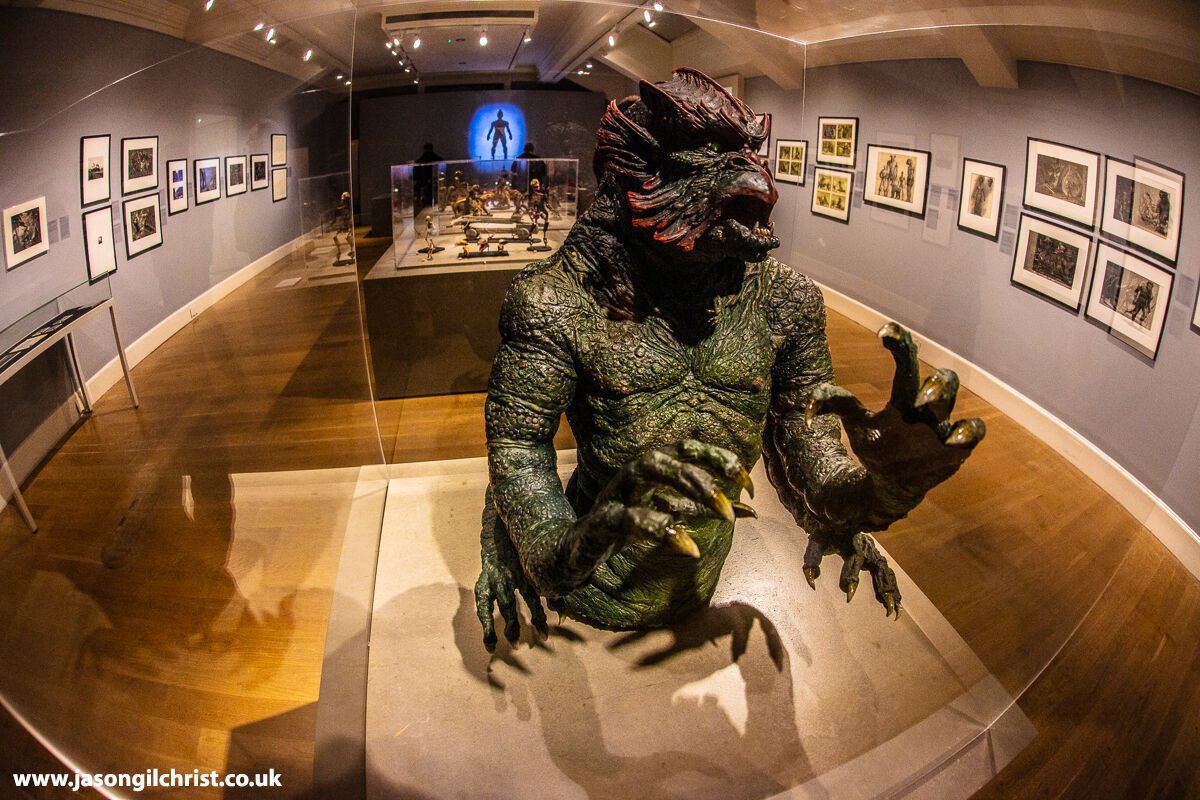 The Kraken, from Clash Of The Titans. One of the larger original Ray Harryhausen models on display.
Next
Previous