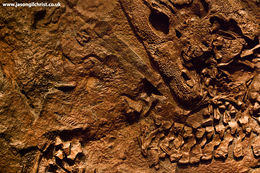 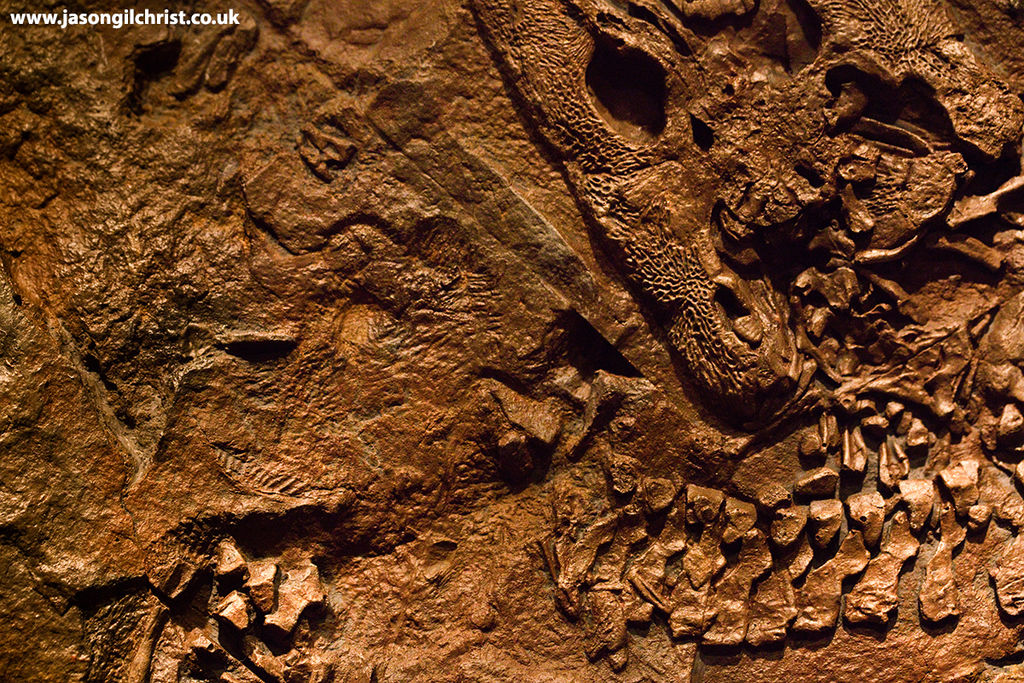 Take a moment. Close your eyes. And imagine a tropical swamp and wet forest landscape. It is hot and humid. The vegetation is lush and glossy green, with thickets of trees and an understory of ferns, horsetails and other spindly fibrous plants. Water drips from leaves. Flying insects buzz about. On occasion, an amphibian or reptile plods through the mud. Where on Earth are you?

Such environments exist today – in the Amazonia of South America, the Congo of West Africa, and the Indonesian islands. But we are in Scotland, in the United Kingdom, Europe. How can this be?

Image: Laurentia, showing the position of Scotland and the rest of the United Kingdom and Ireland ~ 600 mya. Source: British Geological Survey.


We have time travelled. Our time machine has delivered us to between 345 and 360 million years before present (in the Carboniferous Period). Before the Age of Dinosaurs. At the time, Scotland, separate from England and the rest of the United Kingdom, was on the equator and part of the supercontinent Laurentia (abutted by eastern Canada and Greenland). Why have I packed you off in a time machine to Scotland at this time (of all times and places that we could set our sights on)? The reason is that this time is of particular scientific interest. Give a palaeontologist a time machine, and they would not set it for when animals first clambered onto land, or the Age of Dinosaurs, nor the Dawn of Mammals. They would set it for the geological time period known as Romer’s Gap. 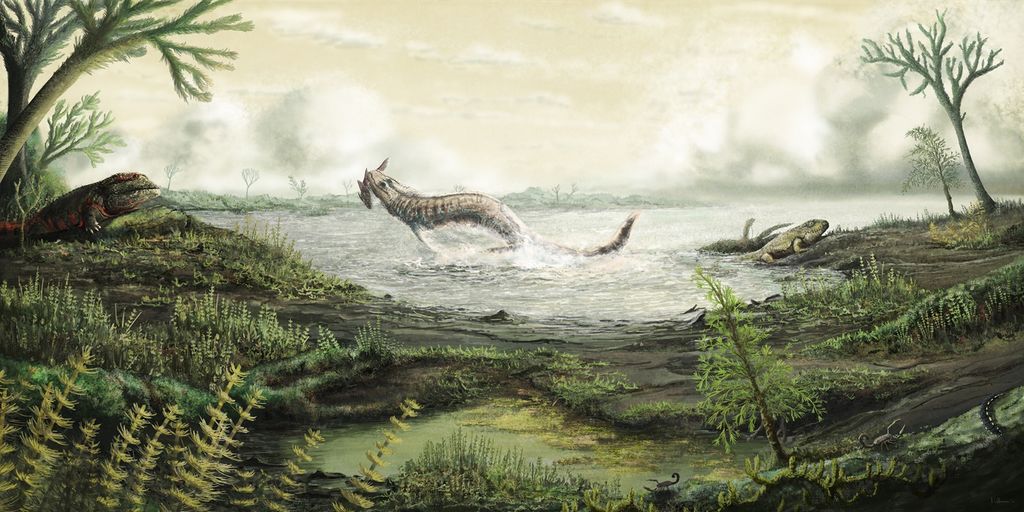 Image:Carboniferous scene from Fossil Hunters exhibition (National Museum of Scotland), featuring the fauna and flora of Willie's Hole, a site in the Scottish Borders. Many of the taxa shown have yet to be formally named by scientists. They include (from left to right), a 'primitive' tetrapodomorph nicknamed 'Ribbo', a colosteid eating a lungfish, and a whatcheerid (yes that is a real thing). If you look closely you will see some Arthropods in the bottom right corner. See: Closing Romer's Gap, National Museum of Scotland. Palaeoart by Mark Witton.


The Gap, today spanning approximately 15 million years, is so-called because, in the 1950’s, American palaeontologist Alfred Sherwood Romer identified it as a time strangely lacking in tetrapod fossils. Tetrapods are vertebrate animals with four limbs with fingers and toes. They are important because they dominate the land-living vertebrate fauna today: as amphibians, reptiles, fish and mammals. In itself, the lack of fossils for a geological span is not important; there are periodic gaps in the fossil record throughout time. The crucial interest here is that major evolutionary change occurred within the vertebrate lineage at this point. Tetrapod fossils found in rocks prior to the Gap (the Devonian, or ‘Age of Fishes’) were polydactylus (with up to 8-digits per limb) and fish-like with tail fins. Fossils in rocks after the Gap show modern features including pentadactyl (5-digit) limbs and other terrestrial features. 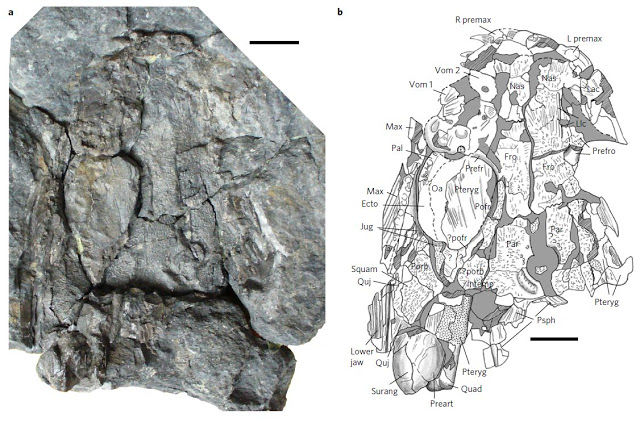 
In a scientific paper, Phylogenetic and environmental context of a Tournaisian tetrapod fauna, published in the very first issue of journal Nature Ecology and Evolution (2017), a collaboration of scientists, led by Professor Jenny Clack of the University Museum of Zoology Cambridge, from Leicester, Southampton, and Cambridge Universities, British Geological Survey and National Museums of Scotland, helped to fill the fossil black hole of Romer’s Gap using fossils unearthed from Scotland, specifically from a project called TW:eed (Tetrapod World: early evolution and diversification). The TW:eed project is an extension of that instigated by Tim Smithson and world-famous fossil collector, the late Stan Wood, the man who famously discovered Lizzie the Lizard. Lizzie is a fossil which, whilst important as the earliest known amniote (laying eggs on land), is probably not a reptile and possibly not female! Stan uncovered Lizzie in a Bathgate quarry (East Kirkton, just 10-minutes from my home) in West Lothian, and the Bearsden Shark in Glasgow, amongst many other fascinating fossils. 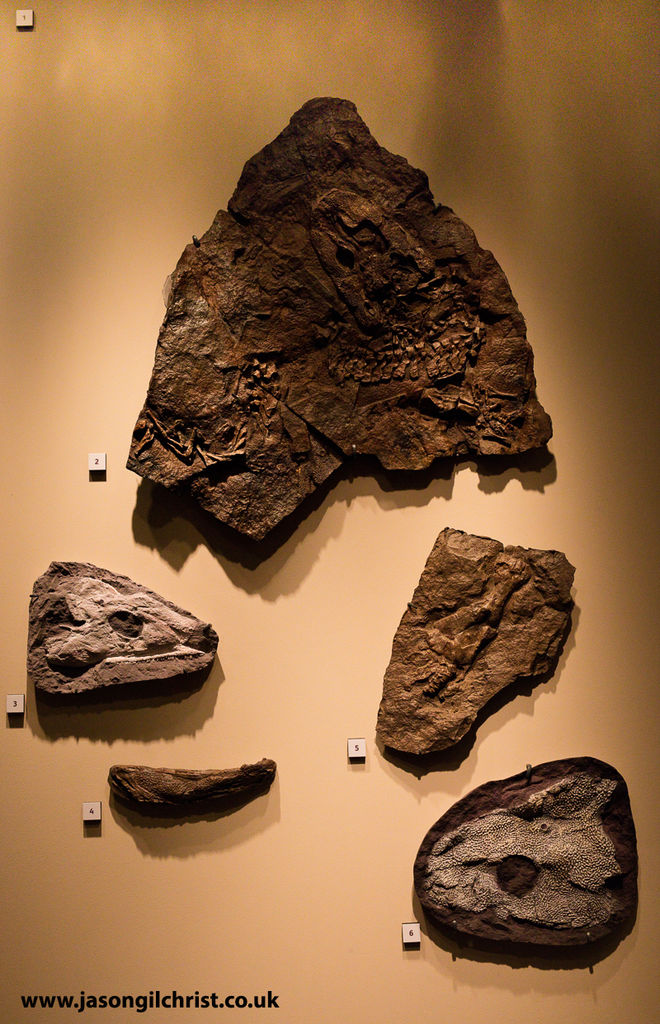 Image: A collection of early tetrapod fossils from Fossil Hunters: Unearthing the Mystery of Life on Land, an exhibition curated by the National Museum of Scotland.


The Scottish Romer’s Gap fossils, including those collected at Willie’s Hole, Burnmouth, in the Scottish Borders and several other locations described in the paper, featured prominently in Fossil Hunters: Unearthing the Mystery of Life on Land, an exhibition curated by and debuting at the National Museum of Scotland that went on to tour Scotland. Sir David Attenborough described the fossil finds as both ‘sensational’ and ‘wonderful’.


The scientists present evidence for at least five new tetrapod species for Romer’s Gap. One of which, buried deep in the rock, was only discovered ’accidentally’ using hi-tech micro-CT scanning. And there are more species to come, amongst others, ‘Ribbo’, so-called because of its extensive ribcage, evidence of air-breathing adaptation. The team show that Romer’s Gap was not a period lacking fossils due to either low biodiversity at the time or environmental conditions precluding the fossilisation process, but simply that palaeontologists have not been looking in the right places. Nova Scotia, Canada is the only other place in the world to have yielded Tournaisian (the early period of the Carboniferous geological era) tetrapod fossils, but so far has produced only a smattering of bones. The Gap fossils of the Scottish Borders were originally buried in mud during tropical flash floods encompassing their vegetated terrestrial habitat. Crucially at least some of these fossils provide evidence of a capacity to walk on land, and are therefore of major importance in placing these early amphibians at a pivotal point in the evolution of our ancestors. Humans are ultimately descended from these early tetrapods. So were the dinosaurs... 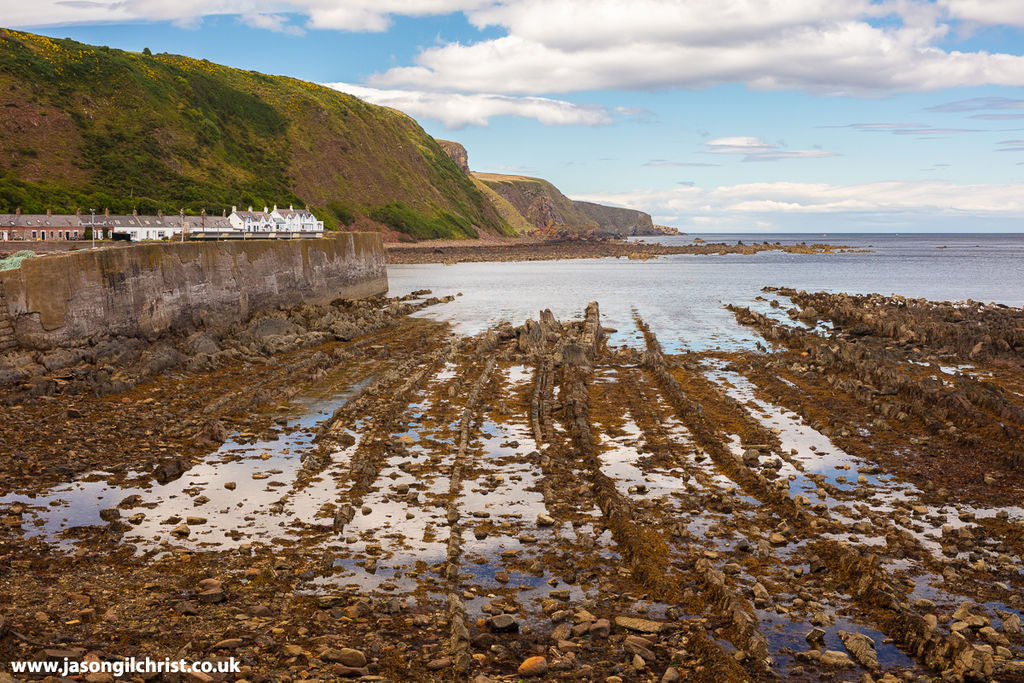 
The project finds suggest a diversity of Tournaisian fossil tetrapods waiting to be discovered within the ‘Gap’. The diversity reflects an evolutionary radiation of tetrapods, a burst of speciation to fill vacant evolutionary niches, following a mass extinction event associated with major and rapid climate change https://www.britannica.com/science/Devonian-extinctions as well as exploiting niches previously unoccupied by vertebrates (because they had not effectively colonised the land). The end of Devonian extinction period saw the loss of up to 80% of animal species – quite scary. The TW:eed fossils tell us, not just what vertebrate species walked the land at the end-Devonian period, but also the environment they inhabited, a varied and seasonal marshy swamp-land with thickets of lycopod trees that periodically experienced drought and flood , and the prey that they likely ate, with fossil scorpions, millipedes and shrimp-like ostracods found in the same deposits. Crucially charcoal deposits provide evidence of forests and fire; and therefore oxygen levels comparable to before and after – so an anoxic atmosphere is not an explanation for Romer’s Gap. 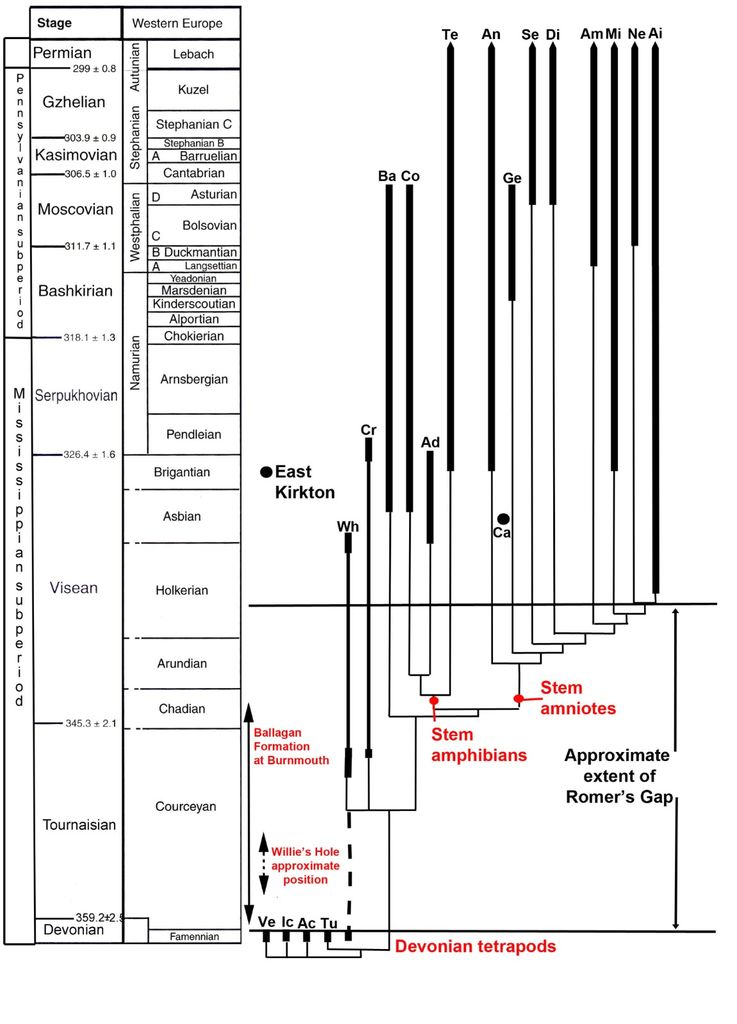 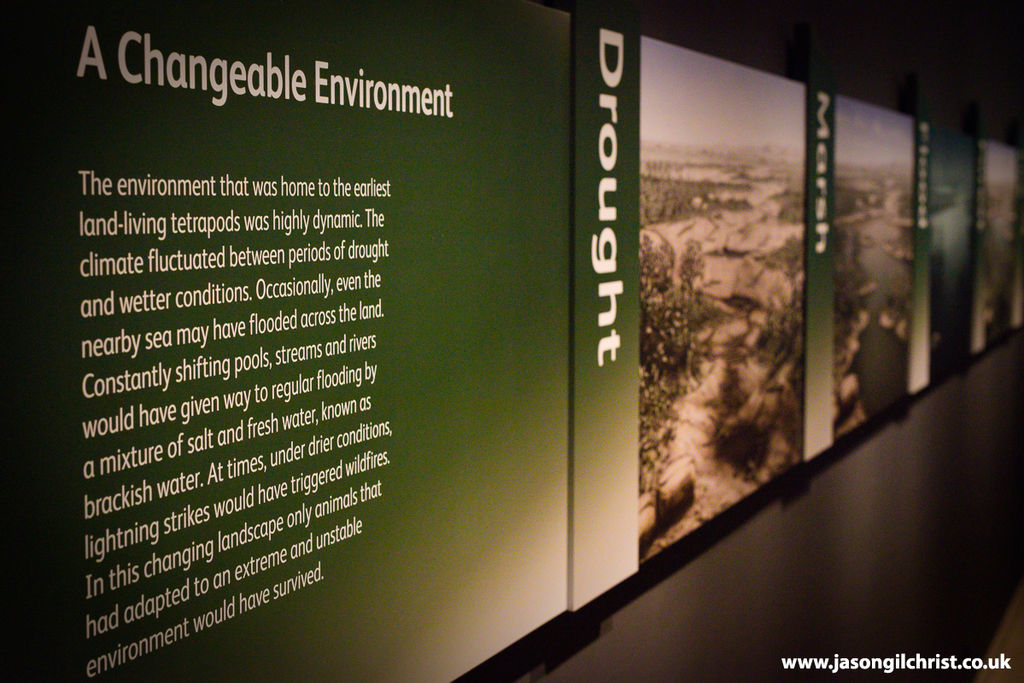 
There is an important lesson to be learned from Fossil Hunters, Romer’s Gap and the Scottish fossils. Past environmental change, driven by a changing climate, has led to dramatic changes in habitat and biodiversity – many species have gone extinct and other species have evolved to cope with change. Historical climate change was natural, driven by abiotic factors, e.g. volcanic eruptions, or locally but equally dramatically by shifting continents (tectonic drift). Climate change today is unequivocally being impacted by human drivers: 97% of actively publishing climate scientists agree that climate-warming trends over the past century are extremely likely due to human activities, and the climate is changing at a significantly more rapid rate than background rates (excluding Earth’s mass extinction events caused by catastrophic events). There is a real and present danger that the rate of change is too great for our habitats, ecosystems, and the species within to cope or evolve to keep up with. The Polar Bear, the most terrestrial of our Arctic mammals is likely to be the first to go. Climate change is a major marker of the Anthropocene, and we and our biodiversity face an even more worrying future as we enter the Trumpocene. 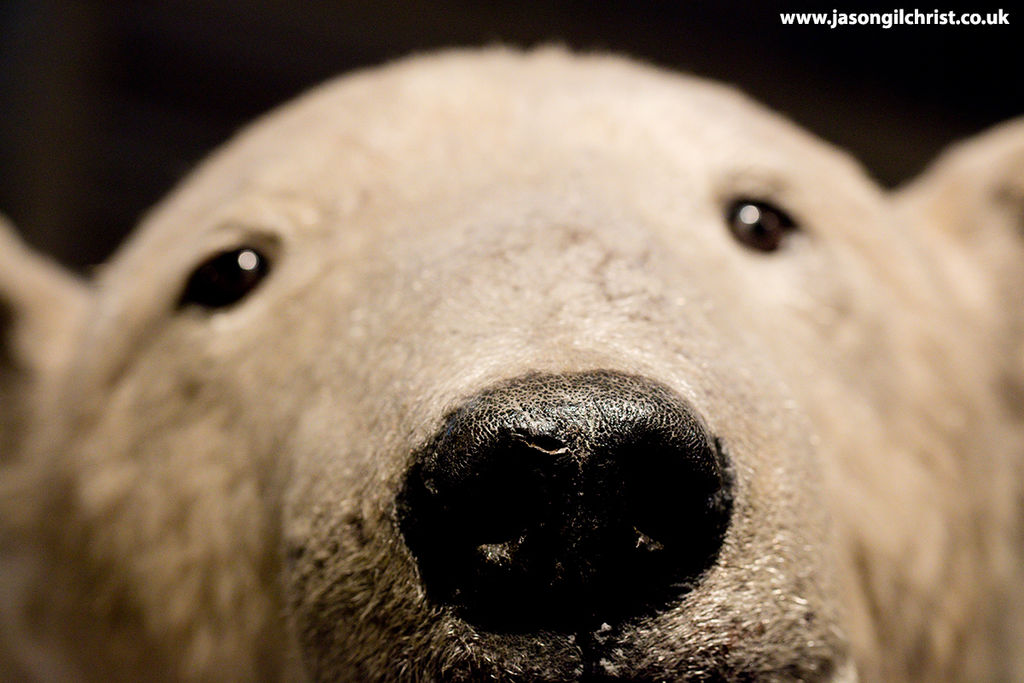 Image: Polar bear, a flagship species for the impact of modern climate change. Taxidermy specimen photographed at the National Museum of Scotland. Global warming is resulting in ice melt and driving starving bears to cannibalism and increasing human-wildlife conflict.


These recent fossil finds from Scotland, whilst rare, are of international importance. They tell us, not only what life used to be like in a part of the United Kingdom 450 million years ago, but they make an important contribution to our understanding of life on earth. Perhaps more pressingly, these fossils and our understanding of the environmental change that accompanied them, indicate that we should treat our current (and future) climate with care...

It was with great sadness that I learned yesterday (26/03/2020) of the death of Professor Jenny Clack. Professor Clack was a giant of vertebrate palaeontology. Based at the University of Cambridge Department of Zoology, she made a major contribution to the understanding of early terrestrial vertebrate evolution, how fish evolved into the first land-dwelling vertebrates, Acanthostega being one of the most famous 'missing links'. Alongside the late great Stan Wood, another of my palaeontology heroes, she was a crucial contributor to research on Scottish early tetrapods that filled a key global gap in evolutionary history – Romer’s Gap. In 2016 I wrote an article to coincide with the publication of an exciting scientific research paper on the early Scottish tetrapod fauna and ecosystem (and the Fossil Hunters exhibition that launched at the same time at the National Museum of Scotland, Edinburgh). The article has remained unpublished until now, and I now publish here on my Blog and dedicate it to the important contributions made to palaeontology, and our understanding of the history of life on Earth, by Professor Jenny Clack. It was a privilege for me to see Professor Clack present for the Edinburgh Geological Society in 2017 on Scotland: The World's Greatest Place for Vertebrate Palaeontology. She gave a fascinating tour of the contribution of Scottish fossils to the field of vertebrate palaeontology. I was a like a kid in a sweet shop during the talk, with every slide a treat of Scottish vertebrate palaeontology. Below are photos taken at the Edinburgh Geological Society presentation by Professor Jenny Clack 22/11/2017. 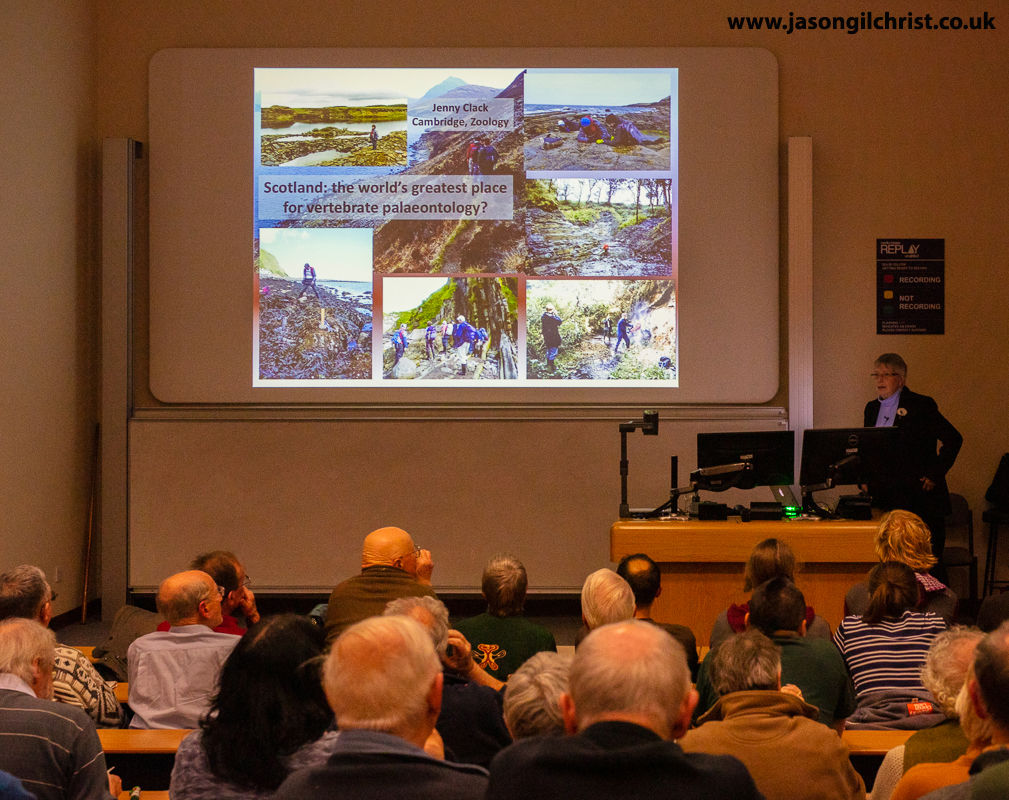 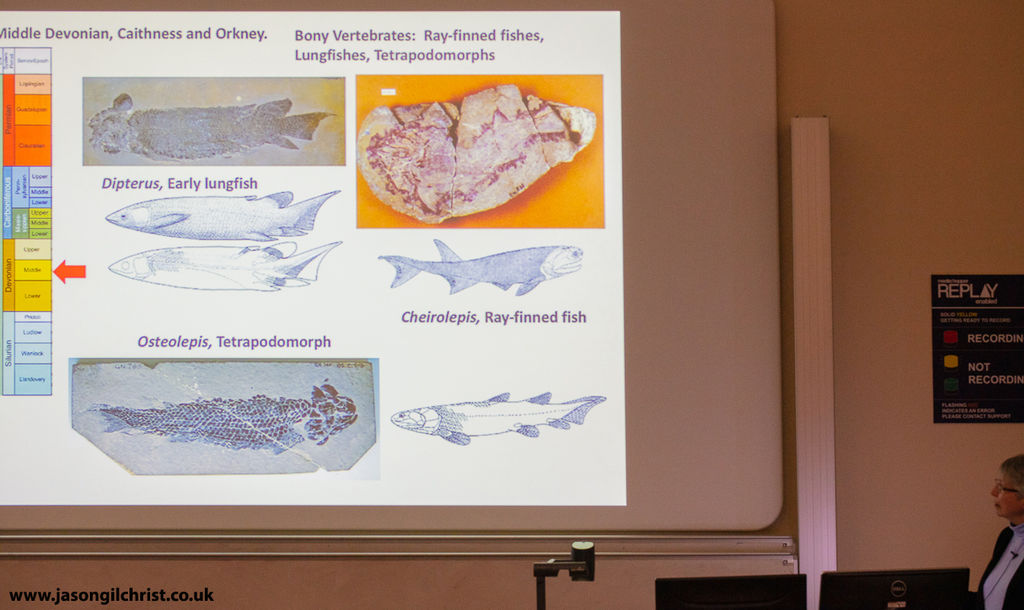 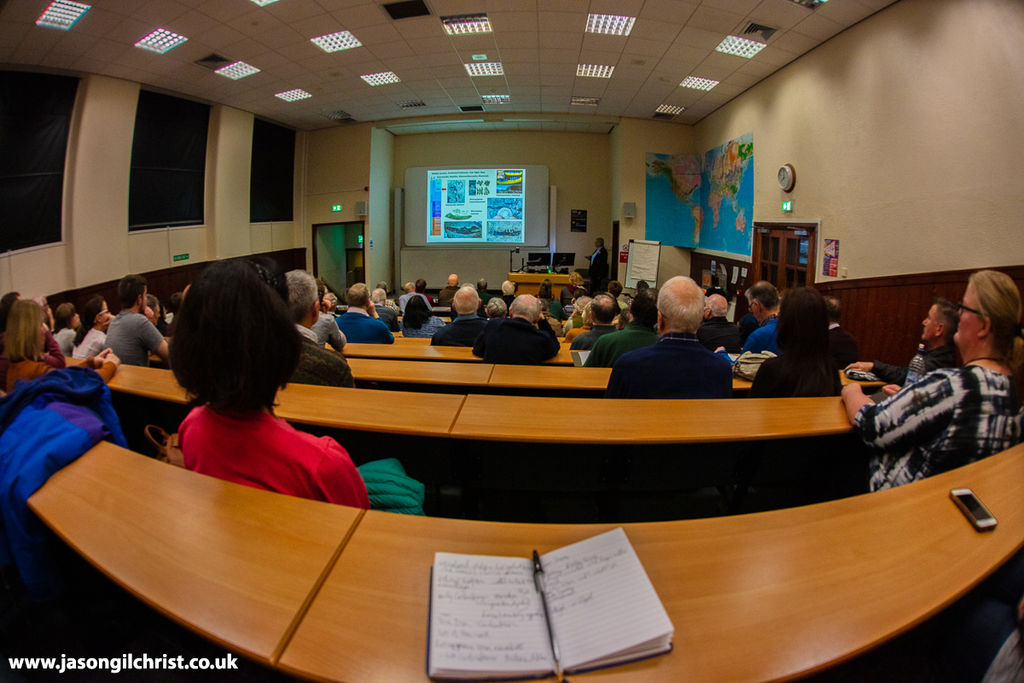 To read personal tributes to Prof Clack's life and career: